Monday night's heavy loss in Penrith was quickly forgotten as the Roosters turned a handy 12-point lead at the break into a comfortable 22-10 win to back up their victory over the Broncos – the beaten 2015 grand finalists – two weeks ago.

In a season plagued by injuries and suspensions, the Tricolours showed what they're capable of when they have a full squad to choose from, and while it will matter little for the rest of this season, it sets them up well for 2017.

Shaun Kenny-Dowall was the star on Sunday, scoring a try, setting another one up and breaking tackles for fun, and the Roosters centre was ably supported by his 16 teammates in a match they thoroughly deserved to win.

The loss puts serious question marks over the Cowboys' top-four prospects, with North Queensland now three points behind the fourth-placed Raiders, who also have a game in hand.

While it's far from panic stations for the Cowboys, the defending premiers must now win their remaining fixtures if they want to earn a second chance in week one of the finals.

The Roosters were dealt a blow just seven minutes into the contest when in-form centre Dale Copley was left heavily concussed after attempting a tackle on Michael Morgan.

The injury forced a reshuffle with Ryan Matterson replacing him, and the Cowboys took full advantage of the new defensive combination with Ethan Lowe spinning his way over the line barely a minute later for the afternoon's first points.

Having been at fault for the first try, Matterson redeemed himself in attack, crashing onto a short ball from Mitchell Pearce to give his side the lead after 22 minutes.

With momentum on their side, the Roosters moved further in front a couple of sets later when a dummy and big right-foot step from Kenny-Dowall helped the centre find the line for seventh time this season.

Blake Ferguson looked to have scored his side's third try in the space of 12 minutes when he grounded a Mitchell Pearce grubber, only for the bunker to rule that he had tackled Kyle Feldt high to force the ball loose.

There would be no such problems moments later when Boyd Cordner charged onto a ball from Pearce to continue his incredible run of form and blow the lead out to 12 points at the break.

Any thoughts of a second-half comeback were quickly extinguished when a Daniel Tupou half-break escalated into Latrell Mitchell streaking away courtesy of a lovely inside ball from Kenny-Dowall to make it 22-4.

The pair almost combined for another four-pointer on the hour-mark, but Mitchell was denied after the final pass was ruled forward.

Pearce became the next Rooster to go agonisingly close after he lost control of the ball as he attempted to reach out and score, and the Cowboys made the home side pay with Kane Linnett sliding over from the ensuing set.

North Queensland almost pulled to within a converted try when Gavin Cooper looked to have grounded a Michael Morgan infield kick that had taken a wicked deflection off the upright, only for Kenny-Dowall to save the day by forcing it first. 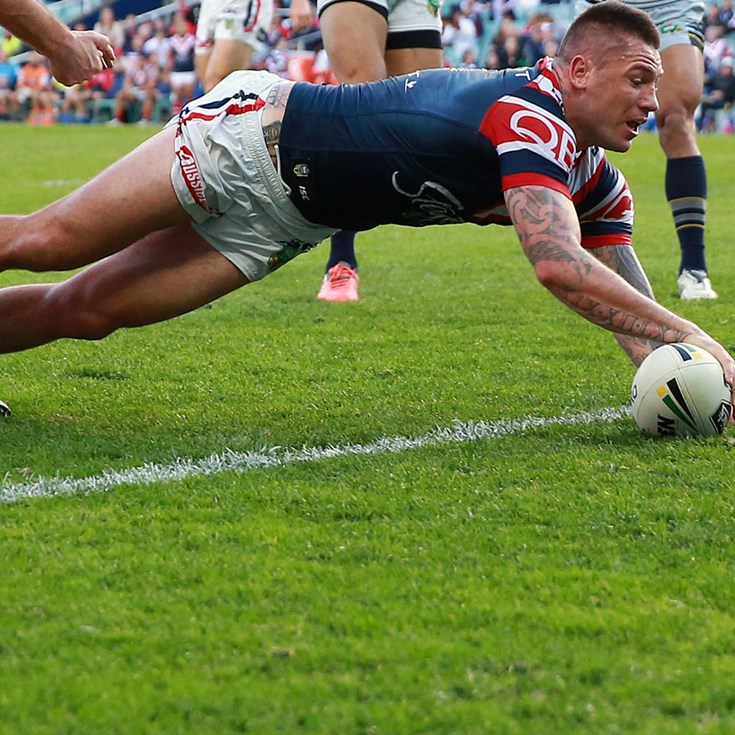