It's official. The Cowboys are back.

Earlier in the week North Queensland enforcer Jason Taumalolo admitted to "soft" efforts from his side recently, and it was the 23-year-old – the future of the Cowboys forward pack – responding in the best possible fashion with a 34-6 win in front of 15,676 fans at 1300SMILES Stadium on Saturday night.

It wasn't just the 18 first-half carries for 175 running metres, it was the help he got from stand-in starter Scott Bolton (113 first-half metres) and the maligned James Tamou (108).

The Warriors headed into this match with redemption in sight after embarrassment at the hands of the Rabbitohs last week, but they did not show it.

Three early unforced errors in yardage sets played the Cowboys back into some much-needed form ahead of Thursday night's showdown with the Bulldogs.

Meanwhile, the Warriors' top-eight chances hang in the balance after two losses in a row, with victories over the next two games against Wests Tigers and Parramatta non-negotiable if they want to play beyond Round 26.

Both sides played out a stalemate until the second Warriors knock-on put Kane Linnett away down the left side, and Michael Morgan put the polish on their first points two tackles later with a perfectly placed grubber behind the line to Kyle Feldt.

Feldt was over again via Morgan's boot just minutes later thanks to a lucky ricochet, but we started to see the real Cowboys come through on Taumalolo's try.

Johnathan Thurston had options outside and in in the form of Gavin Cooper and Taumalolo, and as 'JT3' scythed through a gaping hole, the 1300SMILES Stadium crowd sighed in relief as they could sense their side's mojo had returned.

The Cowboys quickly scooted to a 16-0 lead before their right edge crumbled as Ryan Hoffman sliced through all too easily for the visitors' only try of the night.

That was as good as it got for the Auckland-based club as Justin O'Neill put his side further in front with an exceptional line run to carry a defender over the line on the stroke of half-time.

The second half was bit of a slog, with Ray Thompson's dummy-half scoot and Morgan's solo effort the only four-pointers in a half begging for more points with the Warriors out on their feet.

North Queensland smashed the visitors in the mid-field with 600 more run metres and 60 per cent possession.

The Cowboys have a top-four shaping game on Thursday against the Bulldogs at Belmore Oval, while the Warriors return home for a must-win game against Wests Tigers. 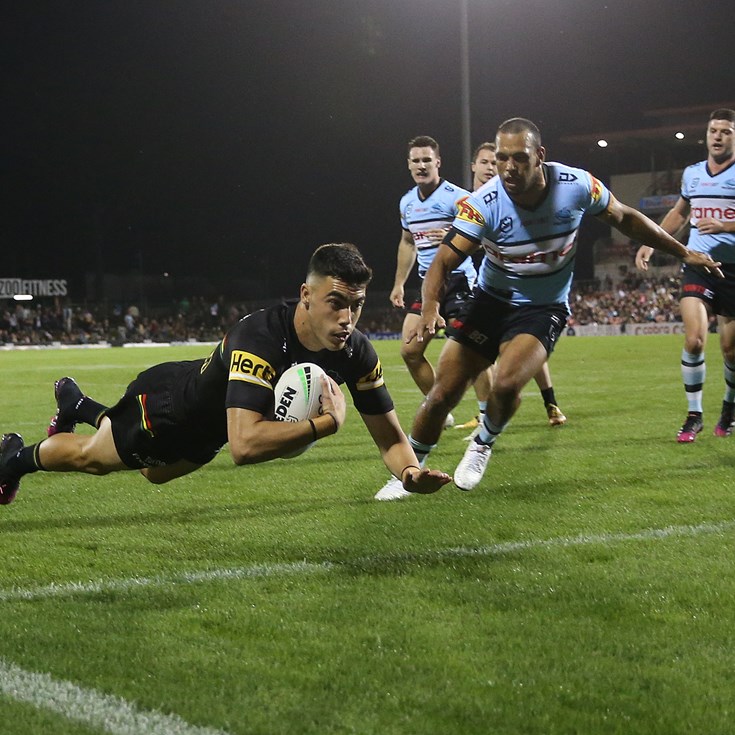