It was a scoreboard dominated by outside backs, but Roosters coach Trent Robinson says it was the forwards who set up his side's crushing 42-6 win over the Dragons on Sunday afternoon.

It was the Roosters of old with the Tricolours outrunning their opponents by more than 600 metres in a performance befitting of a finals bound side; not one near the bottom of the table.

Six players finished the game with over 150 running metres, but most of the damage was done in a dominant first half by the men up front.

While it was the backs who reaped the rewards later in the game, it was the middle forwards who laid the platform for victory when the match was there to be won in the opening exchanges.

The destruction up front didn't stop when they left the field, with the likes of Sam Moa, Kane Evans and Isaac Liu picking up the slack either side of half-time.

"I think there were two parts to the game," Robinson said after the match.

"I thought Dylan, Jared and Sio Siua - along with Nug (Jake Friend) - I thought that was their best period. That was the best we've defended this year in that first part.

"They played a good 30 minutes all of them, and then I got on the other boys late, and then they took it away, and I kept them on in the second half.

"Sam Moa had a cracker of a game, Kane Evans played 30 minutes in that second half, Isaac Liu does what he does, so I thought the guys worked really hard in the first half and then the second-half middles took advantage of that and did a really good job."

Sunday's win also saw the return of Aidan Guerra after he was dropped for the side's Round 23 win over the Cowboys.

The Maroons backrower ran for 88 metres, made 35 tackles (no misses) and was rewarded with a try midway through the second half.

Robinson said he was pleased with the way Guerra had responded after being omitted from the Roosters' best 17 a week ago.

"He took it harsh, but like a man," the Roosters coach said.

"He trained really hard and we got the response we wanted from Aidan. He played a really strong performance today.

"He held his edge really well as an edge backrower and then got the spoils off Nug's kick off his knee in the second half. It's a good performance – that's what you want to see – and that's what you get out of quality players."

Roosters skipper Jake Friend - who set up Guerra's try - was full of praise for his teammate.

"Aidan took being left out of the side hard, but to his credit he got straight into training and did what he had to do. I think he performed really well today," he said.

"Those decisions have got to be made at some stage, but it's a squad, it's not just 17 blokes on the field every week. It's all the stuff that guys do around training as well.

"There is going to be guys coming in and out, but I think overall our squad has been training well and we've been building and building. I think that's shown with the last few games." 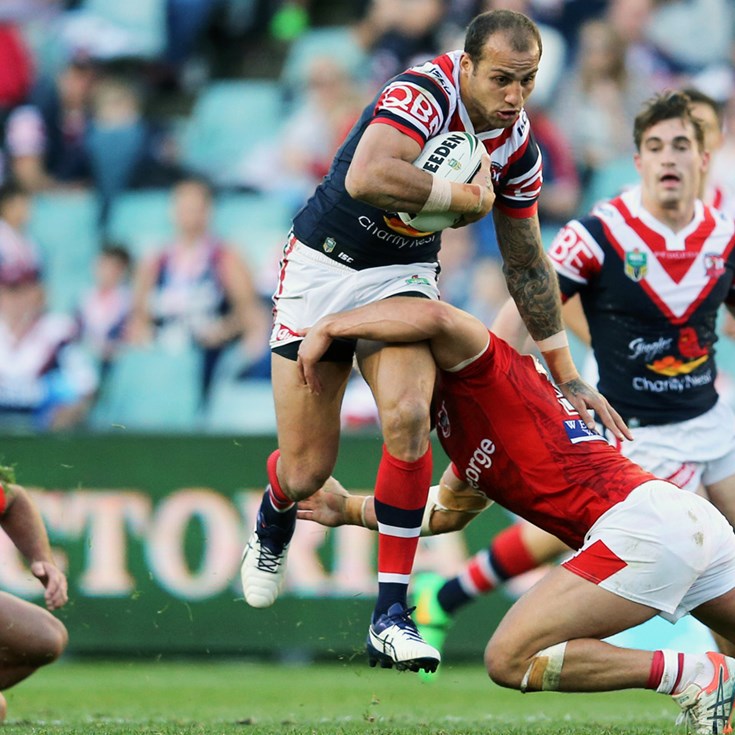 Ferguson's future not at fullback