A free-wheeling second half blitz from the Eels was enough to sink the Dragons on what was the last game on their home turf before the ground is redeveloped, as well as the last game of Monday night football before a re-vamped schedule comes into play next year. Here are five talking points from their 30-18 win.

A fitting farewell to Pirtek Stadium

A Monday night game between two teams who can't make the finals hardly screams "bumper crowd" but the blue and gold faithful had other ideas, with 13,553 turning out. The first game at the ground – back in 1986 – was a 36-6 win over the St George Dragons and at one stage we were on track for an identical score-line until the Eels took their foot off the pedal. Still, coach Brad Arthur and the players were thrilled to be able to repay the fans with a good result.

"It was nice of us to get a win. I think in 2014 our home record was great and over the last couple of years… we probably haven't won enough games here the last couple of years so it was really good to for our last two games, we've beaten the Roosters and that one here tonight against the Dragons. So it was fitting to finish that way," Arthur said.

Skipper Tim Mannah, who has called the ground home for his entire NRL career, said it was a nice feeling to go out with a win.

"Yesterday (Sunday) it sunk in [at] our last training session here and a [I've got] lot of good memories," Mannah said.

"But moving forward, we've got some success in front of us and we've just got to get used to playing anywhere. It was good while it lasted here, but it's time to move on."

Dragons coach Paul McGregor made the big call this week to give young half Drew Hutchison a run in first grade with the departing Benji Marshall watching on from the sidelines.

Hutchison was mostly good – he scored a powerful solo try and launched some quality touch-finding kicks – while there were one or two he'd like over again.

But while Marshall is certain to part ways with the club after this season, Hutchison could be the future and will get his chance to impress further over the off season.

"It was good for Drewy to get a game. He knows how hard it is and how much work he needs to do to and he's got plenty of time to do that before next season," McGregor said.

"He's a bit tired in the shed there as expected, he played 80 minutes and hasn’t played it for quite some time. He's only young. He'll work hard in the pre-season and he'll get plenty of opportunity going forward."

Hutchison's halves partner and skipper Gareth Widdop had plenty of praise for the youngster in what was his fourth NRL game but first this season.

"It's great for him to get an opportunity at the back end of the season and he'll be better for that and he's got a lot of time, he's only still young. He's a great kid and he's willing to work hard and learn and it's great to see, I thought he went good tonight," Widdop said.

Widdop said the fact Hutchison took plenty of the in-play kicks (11 kicks for 331 metres, Widdop nine for 214 metres) wasn't a preconceived plan but a result of playing to the halfback's strengths.

"You want to back his ability and he's a great kicker of the football. I think we saw tonight a few good kicks from Drew and we like to use people's strengths, it's just the way it worked out in the end and like I said you've got to back yourself and he did that," Widdop said.

Eels forward Kenny Edwards – fresh off signing a three-year contract extension – scored a remarkable try midway through the first half. Dragged down after a surging run, Edwards drew a penalty about 12 metres out from the Dragons line.

Noting that the quick tap was an option because he wasn't within 10 metres of the try-line, Edwards tapped the ball to his foot and sprinted past the retreating Dragons defenders – who mostly weren't even watching – to plant the ball under the posts for the cheekiest of four-pointers.

"As you know I'm a bit of a cheeky fella so when the opportunity arose I knew that's what I had to do, take a quick tap," Edwards told NRL.com.

"I knew I was outside the 10 so I took a quick tap and was lucky enough to catch them napping.

"I've taken a couple of quick taps this year and haven't been lucky enough to score but lucky enough there my awareness was on, I took the tap and got the lucky try."

Edwards admitted he was still expecting the play to be called back when he first planted the ball.

"I turned around and I thought the refs were going to call it back but it was play on and when I saw the ref running back [to award the try] that's when I knew I had it. It's just a lucky try."

Sims' season over, Frizell in doubt

McGregor confirmed back-rower Tariq Sims had re-aggravated an ankle injury that caused him to miss last week's game but wasn't sure on the extent of a knee injury that ended Tyson Frizell's night early. However the loss of both midway through the game put plenty of strain on the remaining forwards and interchanges.

"It certainly didn't help. We had a few kids out there tonight. A few kids under the age of 20 which is good for their development but it certainly doesn’t help when you lose players like Tariq and Frizell throughout the game," McGregor said.

"Tariq only lasted 20 minutes or 15 minutes and Friz pretty much the same, he went off and on twice, you use your interchange up and those younger kids have got to play longer minutes and get exposed a little bit more which is good for them going forward but it certainly doesn't help when you're trying to win a game of footy.

"Tariq's definitely gone for the year. He redid his ankle that he missed last week on. We're not sure on Friz, he's a little bit different, I haven't got the full report there yet. He wanted to keep playing but from my eyes he was limping around a little bit and I didn't want to put a player out there that was a passenger so to speak.

"He's too valuable to put out there busted so we took him off. We'll have a look at him tonight and tomorrow and see how we go."

Parramatta's right side defence has leaked plenty of tries in recent weeks but the return of lanky centre Brad Takairangi not only plugged that gap – it turned that flank into an attacking dynamo.

Five-eighth Clint Gutherson linked up with Takairangi to lay on three tries for exciting fullback Bevan French and one more to Michael Gordon playing on the right wing.

While that edge did eventually concede two tries it wasn't until the final five minutes of the game with the result beyond doubt (and one of those was from a cross-field bomb rather than a defensive breakdown) in a marked improvement on recent weeks.

Takairangi isn't the biggest-name absentee the club has had this year given the dramas around Kieran Foran, retirement of Anthony Watmough and disciplinary suspension to Corey Norman, but Takairangi's return highlighted how much he'd been missed.

"We haven't had much luck with combinations this year," Arthur said of Takairangi's comeback.

"With a more settled team going into this pre-season and knowing who's going to play where and who's going to do what, will give us an opportunity to have three solid months and hopefully our attack will be better for it." 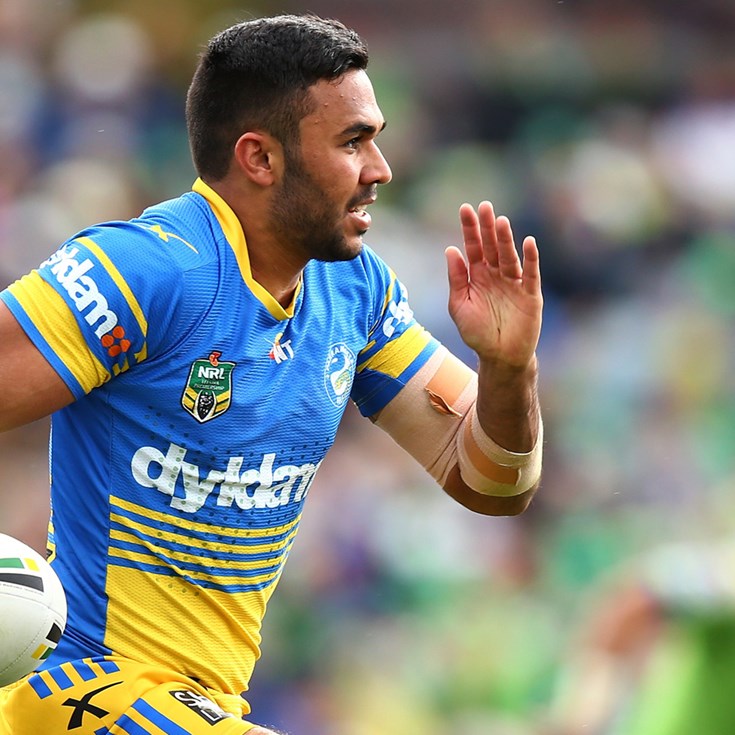