The impressive 2016 season of the Wests Tigers has ended at the hands of a red-hot Raiders outfit, who ran out 52-10 winners in front of a packed but disappointed Leichhardt Oval crowd on Sunday afternoon.

The result is a huge relief to Titans fans, who are the beneficiaries of the result as they cling to eighth spot and a finals meeting against Brisbane next week.

The result means Ricky Stuart's Raiders climb above the Sharks into second place, meaning they get to host Cronulla at home next week.

However Stuart has a couple of headaches with a silly shoulder charge from fullback Jack Wighton putting a cloud over his involvement in that game, while big prop Shannon Boyd (elbow) left the field last in the game. Winger Jordan Rapana came from the field late with a cork while centre Jarrod Croker also looked to be running out a corked quad late in the game.

Hooker Josh Hodgson was simply brilliant in the opening half to orchestrate the win while that dangerous right edge of Joey Leilua and Jordan Rapana combined for three tries.

For the home team, the impressive and much-improved five-eighth Mitch Moses tried his heart out and produced two moments of individual brilliance to set up both his team's tries but his afternoon will also be remembered for a couple of ordinary misreads that led to a pair of Josh Papalii tries.

You got the sense it wasn't going to be the Tigers' day right from the time Tim Simona's opening kick-off sailed dead on the full. While they escaped that examination unscathed as the Raiders produced some early sloppiness, it was the Green Machine only who clicked into gear after that.

A cheeky grubber behind the line from Hodgson was perfect for Croker to open the scoring in the 10th minute, before another error from Simona set the scene for a stunning piece of play.

Swooping on a loose Simona pass, opposing centre Leilua looked wrapped up by the defence before producing a stunning flick pass around the back of the defence onto the chest of outside man Jordan Rapana who couldn't believe his luck as he galloped off to plant the ball down for a 12-0 lead.

Moses then broke the Raiders line and showed off his remarkable pace in drawing the fullback Wighton before sending a supporting Josh Aloiai in to score.

That was as good as things got for the home side as two Josh Papalii tries – both running past defensive misses from Moses – as well as a cheeky dummy-half dart from Hodgson blew the score out to 30-4 at the break.

Departing fan favourite Robbie Farah's lap of honour at half-time drew a predictably emotional response from the 18,634 fans who flooded Leichhardt from hours before the game and they were back in full voice just a minute into the second stanza as Moses split the Raiders line again.

A stunning chase and ankle tap from Joe Tapine denied the supporting Tim Simona just a metre from the line but Tim Grant crashed over from the next play.

Needing a bit of good fortune to have a chance of launching a miracle comeback, the Tigers got the opposite as first a loose ball was unluckily given as a Canberra feed despite protests from Moses at the scrum, before the Green Machine clicked back into gear on the back of another nice piece of work from Tapine, whose pass sent Elliott Whitehead into space for Leilua to score and the result beyond doubt at 36-10.

A runaway try to Rapana followed by a four-pointer to Tapine stretched the lead out further before some late razzle-dazzle – which included a shock grubber from Sia Soliola to Sam Williams – iced the 52-10 win. 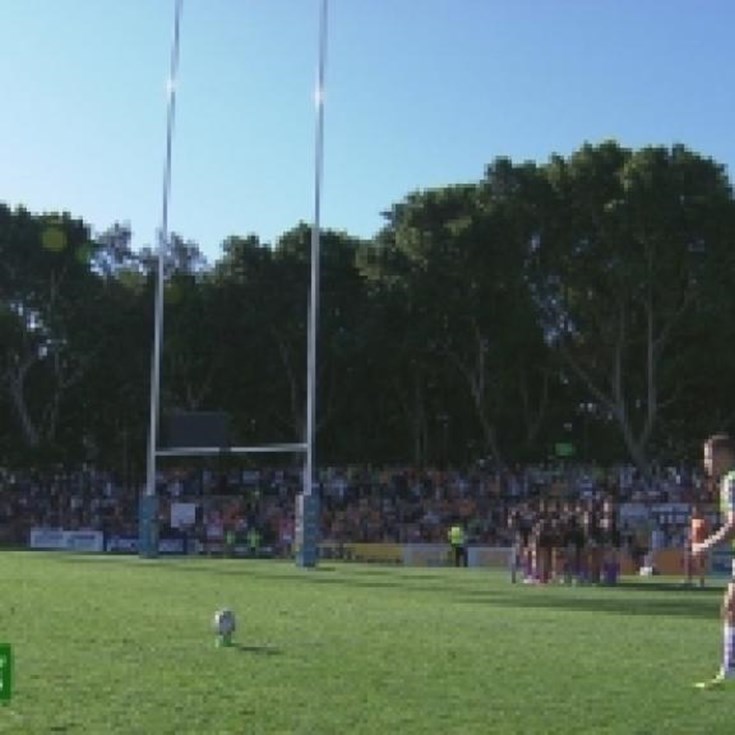