Emerging Cowboy Coen Hess has won the race for the hotly-contested final interchange spot as the premiers begin their push for another deep finals run.

Big things were expected of Hess since the early days of junior footy, and by beating Patrick Kaufusi and John Asiata to this week's spot, stamps his place as a member of the Cowboys' strongest 17-man team for the first time in his career.

Standing 190 centimetres and weighing approximately 115 kilograms, the tale of the tape is one of the most impressive in the NRL – and he has only just turned 20 years old.

Recent injuries to Matt Scott and Ben Hannant, along with Sam Hoare's long-term injury paved the way for Hess into the top-grade side, but it was up to the man himself to prove he belongs at the very highest level.

While Hess failed to make the 2016 Holden Cup Team of the Year, he is one of only three under-20-eligible players (Nathan Cleary and Tevita Pangai Junior the others) playing NRL finals this year.

"I think his form has been good and that he deserves it," Green said on Tuesday.

"It also gives us the option with 'Lowey' (Ethan Lowe) playing through the middle, which has been working really well also.

"I think we are actually strengthened when 'Hessy' comes on."

With hard charges, good endurance and a splash of skill, Hess has shown it all since his introduction to first grade, and it was only a matter of time since he became a permanent member of the 17.

Such was the belief North Queensland had in him that as of late last year, Hess and Michael Morgan were the only Cowboys squad members to have had their contracts extended until 2018.

"We've brought 'Hessy' along gradually and have been happy with his progression and improvement," Green said.

"He has a really good temperament so I'm not surprised by how he's gone, but it's good to see."

"I knew he was capable of that. It was just whether he was ready to do that at that level or not at this stage, and so far he has shown that he is.

"What he lacks in experience he makes up for in youthful enthusiasm. It's always good to have that in the team."

The Cowboys have named a full-strength team for their qualifying final with Melbourne at AAMI Park, but Green admits co-captain Matt Scott is required to get through a full week of training before he is cleared to play.

Meanwhile, Thurston has not totally recovered from the corked thigh he received against the Titans last week, but Green is more confident of Thurston being fully fit come Saturday night.

"[Scott] has got to get through the week's training. He's not cleared to play as yet, but obviously we want our best team on the field on Saturday night so he will be given every chance to prove his fitness," Green said.

"We've got to manage [Thurston's] training with [the corked thigh], particularly his running load earlier in the week. But I expect him to be right." 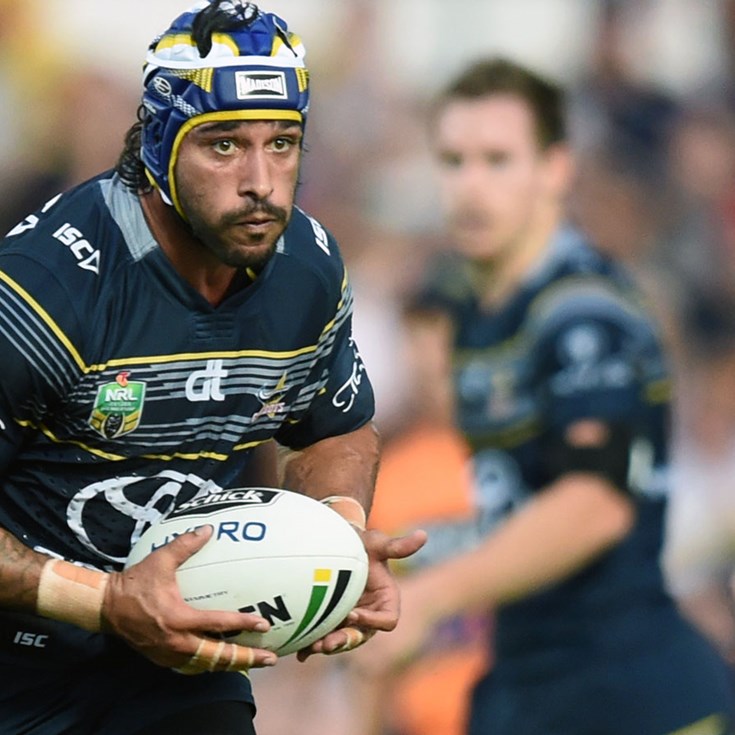