Penrith's quest for back-to-back Holden Cup premierships is alive after the Panthers survived a second-half scare to eliminate the Cowboys 32-16 at Allianz Stadium on Friday afternoon.

The defending champions looked set for a comfortable win after they raced out to an 18-0 lead inside the opening quarter of the game, but their passage to the NYC grand final was only secured six minutes from full-time when Daniel Brown punished some soft North Queensland defence from a scrum to sprint 80 metres to score.

The Cowboys were dealt a huge blow before kick-off with star fullback Kalyn Ponga withdrawn from the squad as cover for Kane Linnett in the NRL side.

Their cause wasn't helped when Nick Lui Toso was forced off just before half-time with a knee problem and then Marcus Jensen was helped from the field after 50 minutes with a foot injury to severely blunt their threat in attack.

It took just five minutes for the Panthers to assert their dominance when skipper Oliver Clark charged onto an inside ball from Dean Blore to barge over next to the posts.

Wayde Egan should have extended Penrith's lead five minutes later when he caught the Cowboys napping on the last tackle but dropped the ball over the line in the process of scoring.

Luck looked to have eluded the Panthers soon after when some quick thinking from flashy fullback Dylan Edwards saw him streak clear from a penalty tap only for Cowboys speedster Gideon Gela-Mosby to reel him in 10 metres short.

It mattered little for the minor premiers as Cowen Epere made it two from two for the front-rowers to bash his way over before Edwards sliced through from the following set to make it 18-0 after 18 minutes.

With the Panthers keeping up with the clock for the opening quarter of the game, North Queensland desperately needed a response so they turned to prop Nicholas Brown to somehow muscle his way over despite the attention of five would-be defenders to cut the gap to 12.

That would prove to be a minor blip on the radar for Penrith as Ratu Tuisese collected a brilliant offload from Christian Crichton to dive over in the left corner for his 22nd try of the season.

Not to be outdone, Cowboys winger Marcus Jensen showed why he is the leading try scorer in the NYC as he flirted with the sideline for 30 metres before touching down for his 27th four-pointer of 2016 to make it 22-10 at the break.

After a back-and-forth start to the second stanza, the game exploded into life in the 54th minute when Panthers centre Braidon Burns was sent to the sin bin for a professional foul that denied a certain North Queensland try.

From the ensuing set, Cowboys No.9 Brandon Smith burrowed over for his 18th try of the season to make it a six-point gap before Soni Luke was somehow denied an immediate hit-back at the other end.

North Queensland looked certain to draw level in the 68th minute when Gela-Mosby broke into open pastures, but instead of taking the tackle, opted for an audacious flick pass that was picked off by the Panthers.

It would prove to be a crucial play as a simple one-on-one miss at one end of the field led to an 80-metre try to Panthers winger Daniel Brown to put the game out of reach before Wayde Egan strolled over to put an exclamation point on the win.

Roosters into GF with comeback win over Dragons 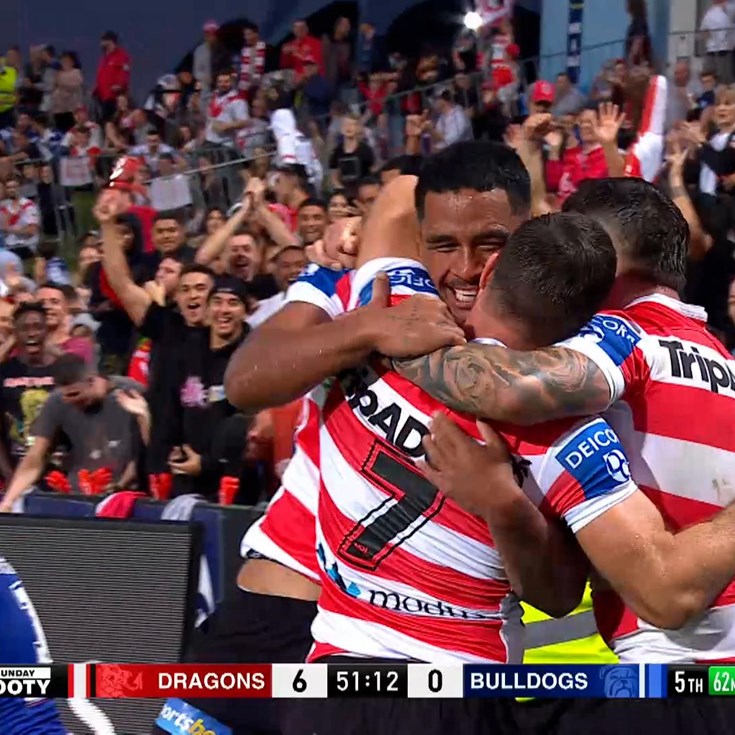 Dufty through the middle