Rugby League World Cup 2017 (RLWC2017) has announced its fan-friendly ticket pricing for next year's tournament to be co-hosted by Australia and New Zealand from 27 October to 2 December.

Fans are encouraged to purchase early to secure the best seats at the lowest prices, starting from $10 for kids and concessions, $20 for adults and $45 for a family of four. The ticket pricing reflects the RLWC2017 organising committee’s vision of having next year’s tournament seen by more fans than ever before.

RLWC2017 CEO, Andrew Hill, said the tournament would be a festival of rugby league with some 450,000 fans expected to attend the 28 games across 13 host cities – a World Cup record.

"When setting ticket prices, value for money was our number one priority. We wanted to make next year's tournament accessible to all fans, particularly families, giving them the opportunity to attend a World Cup and see the greatest rugby league players from around the globe.

"A family of four can attend a Rugby League World Cup pool match from just $45, a semi-final from $120 or even the final in Brisbane, where they will witness both the men’s and women’s winners crowned on the same day, from only $180.

"Our venue packs are also extremely affordable, where fans can see all matches at selected venues at a discounted rate, starting from as little as $17 for kids and concessions or $34 for adults.

"To get the best seats at the best value, fans are urged to buy tickets when they go on sale to the general public on Thursday 27 October 2016," concluded Hill.

Other highlights of the ticket prices include:

Opening ceremony followed by Australia vs England from $81.60 for adults

The RLWC2017 will be contested from 27 October to 2 December 2017 and hosted by Australia and New Zealand with three pool games also being played in Papua New Guinea.

With 11 teams already confirmed, the final three teams will come from the European Qualifying Tournament to be played in October and early November this year. The teams who are still in the race are Wales, Ireland, Russia, Serbia, Italy and Spain.

All ticket/item prices include GST, if applicable, and are quoted in either AUD/NZD 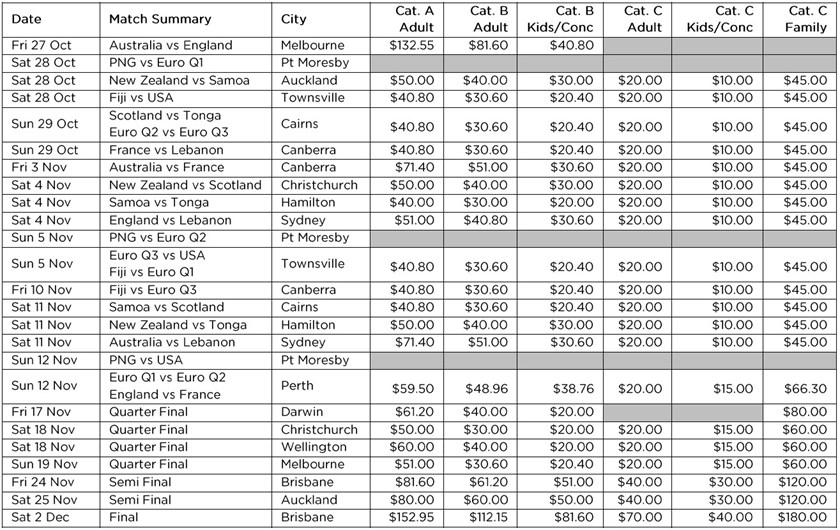 All ticket/item prices include GST, if applicable, and are quoted in either AUD/NZD

Single Game tickets go on sale to the general public at 10am (at local time of chosen RLWC2017 venue), Thursday 27 October 2016 from RLWC2017.com or via Ticketek (Ticketmaster in Western Australia).

Fans can purchase up to 20 tickets per game in one transaction;

Ticket details for pool games played in Papua New Guinea, as well as Rugby League Women's World Cup pool matches and semi-finals will be announced in due course.

* Booking and transactions fees will apply

Kids/Junior: 4-15 years inclusive. 3 and under free on knee.

The best NRL plays from Round 22