Born to a Chilean mother and Nicaraguan father, and raised on a diet of empanadas and papusas, Jonathan Espinoza was a foundation player when Latin American Rugby League started in 2013.

Aside from the Latin Heat and Chilean international teams, he also plays for the Griffith University Dragons, grand finalists in this year's Queensland Universities Rugby League.

The 25-year-old recently returned to Chile and has been voluntarily conducting development clinics and appearances to promote rugby league in numerous locations across the South American nation.

Here he gives a firsthand account of a "life-changing experience" which will culminate on Saturday in the first ever international rugby league game on Latin American soil between Chile and neighbours Argentina.

Here is Jonathan's diary from his experiences bringing rugby league to the people of Chile. It's 2am and we're waiting in the middle of the Andes Mountains for the Argentinian border to open. We're four hours into a 30-hour bus journey to get from central Chile to Miramar on the Atlantic coastline.

I certainly never thought my involvement in rugby league would bring me to this point – but I'm more than happy it has.

The past few days have been an absolute whirlwind and far exceeded my expectations.

In four days since landing in South America I have had three full days of development clinics, two radio interviews, one TV interview and about four hours sleep each night.

The Chilean people have been so enthusiastic, welcoming and inspiring.

We've been mostly promoting rugby league in a region about six hours south of the capital of Santiago and it's a completely different lifestyle to that in Australia.

Many people in this area earn just AU$5,000 a year, so they live very frugally, and their houses are small, simple, but homely.

Across Latin American nations there is a saying 'Mi casa, su casa' which means 'My home is your home' and we have heard that countless number of times, such has been the hospitality.

The locals' appetite to learn the game of rugby league is well beyond what I expected.

There's a gentleman here, Guillermo Artiaga, who has been the driving force behind the code taking off. He's only relatively young, but totally dedicated to the sport.

They already have seven teams in this area and he holds classes each week that not only teach how to play the game, but also the history of the sport, and the characteristics of each NRL side.

Guillermo even built a makeshift factory in his front room so he could manufacture rugby league balls, because there is a shortage.

On my first day here we held a clinic at a local field and had a few dozen people in attendance – a mix of children and adults.

We handed out jerseys and materials donated by people back in Australia, which brought huge smiles from the crowd.

They must have enjoyed it because we were invited back to address each and every class at the high school. 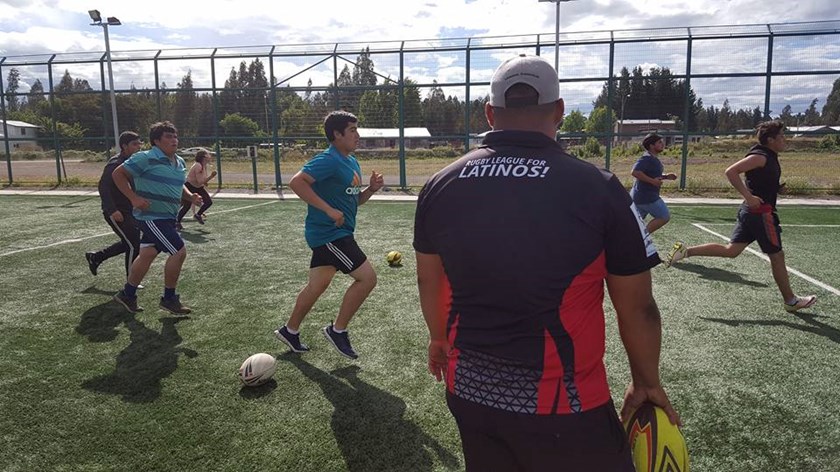 After our presentation, more than 100 students turned out for a demonstration in the playground. Completely unexpected and overwhelming (in a good way).

I'm travelling with teammate Ben Fisher, who has a Chilean father, but has grown up mostly in the Penrith area, west of Sydney.

Because he is fair-skinned and well over six-foot tall, he stands out a bit in this region, even though Chileans do come in all shapes and sizes, just like Aussies.

The locals keep saying he looks like Justin Bieber and he's become a bit of a celebrity, with people asking for his autograph.

As much as we joke around though, this has been a life-changing experience for us both and we are more appreciative of life and determined to do more of this type of thing in the future.

There are some talented kids here and I believe a development officer in Latin America could make great things happen.

If I can be honest, I've choked up hearing about some of the stories of hardship, and seeing the lengths people will go to in order to participate.

Some of the players on our Chilean side travelling to Argentina have played the game for less than six months, but went around door-to-door collecting money and selling belongings so they could make this trip.

I've got nothing but admiration and respect for the domestic players and it will be an honour to help them take on the Argentinians.

For those who don't know, there's a strong rivalry between Chileans and Argentinians, especially as the latter has been so much stronger in rugby union over the years.

Chile has also beaten Argentina in the final of the last two Copa Americas, a soccer tournament here which is treated like a religion.

We're looking forward to fanning the flames on another sporting rivalry between these countries. Bring on Saturday.