The Dally M Award has been dominated by the likes of Johnathan Thurston, Jarryd Hayne and Cooper Cronk in recent years, but in 2012, Ben Barba became the first player from the NYC to claim the prestigious medal. His exploits for the Bulldogs were unrivalled, and given his performances in the Toyota Cup, it was a matter of when not if he would take out the top gong. Barba played 26 games for the blue and whites in 2008 and 2009, and those of you who got to games early would have seen a young man terrorising opposition defences. He finished his career in the under-20s with 38 tries, 93 goals and 340 points (third-most in Bulldogs history). His 28 tries in 2008 remains a club record, while he also made the Toyota Cup Team of the Year that season. Cowboys enforcer Jason Taumalolo became the second player from the NYC to be crowned the game's best (alongside Cooper Cronk) last year, and you can expect to see many more take home the award in the years to come.

Scoring 70 points in a game of rugby league isn't easy. Rare, yes. Impossible, no. Teams have scored 78 points three times in the NYC, while 74 has been reached on another three occasions. Incredibly, the (almost) all-conquering Panthers side of 2016 racked up 74 points not once, but twice last season. Scarier still, they did it in back-to-back games. Fans in Bathurst were treated to a points-scoring frenzy as Nathan Cleary and Ratu Tuisese grabbed doubles and another nine Panthers touched down for four-pointers. The 74-10 triumph over the Raiders was good, but the men from the foot of the mountains weren't done as they thrashed the Warriors by the same scoreline the following week. Braidon Burns crossed five times, Tuisese picked up another double, and six more players troubled the scorers. In somewhat of a mercy rule for the rest of the competition, the back-to-back routs spelled the end of Cleary's time in the Holden Cup, who went on to play in reserve grade before taking the NRL by storm.

28. Feldt stands alone atop the summit

While Johnathan Thurston, Cameron Smith and Jarrod Croker are all on track to trump Hazem El Masri's points-scoring record in the NRL, no one will surpass Kyle Feldt's tally of 570 points in the NYC. The Cowboys winger is 61 points clear of former Warriors halfback Mason Lino, and given 2017 will be the final year of the NYC as we know it, it would take something special to see him dethroned. Feldt did most of the damage in 2011 when he scored 272 points for the Cowboys, 38 more than he scored the previous season. To put that into context, Cooper Bambling is the second-highest scorer in the club's history with 240. Feldt finished his NYC career with 37 tries and 211 goals from 63 appearances; his 570 points coming at an average of just over nine points per game. In comparison, El Masri's record haul of 2,418 points saw him score 7.65 points per game.

In isolation, Ali Beale's 80th-minute field goal from 45 metres out sounds amazing. Surely scores were level, and the young Panther had won his side the game with a booming drop goal? Unfortunately for Kurtley Beale's cousin, the scores weren't level. In fact, they weren't even close. You see, the Panthers were trailing the Cowboys 38-4, and instead of copping the 34-point defeat, Beale decided to cut the margin by one point. If they had scraped into the finals on for-and-against then he might have been hailed a genius. Instead, the Panthers finished 15th in 2010, and Beale only played one more game after his Round 2 brain-snap.

When you think of sporting royalty in the Shire, no surname is more revered amongst Sharks fans than 'Rogers'. Steve was a legend of the club in the 1970s and 1980s, and was named one of the Sharks Immortals alongside four other former players. His son Mat followed in his footsteps, and was named a Club Legend in 2003 along with his father. The pair were then selected in Cronulla's 'Dream Team' in 2006 with Mat on the wing and Steve next to him in the centres. With that sort of pedigree, it should come as no surprise that a third-generation Rogers would make a name for himself in rugby league. Mat's son Jack earned his Holden Cup debut in Round 25 of the 2015 season, and it took just two carries of the football for him to do the family name proud. The young winger crashed over untouched in the 13th minute against the Eels, before he cut back against the grain to double his tally in the shadows of half-time. His incredible afternoon reached new heights 10 minutes into the second-half when he waltzed in to complete his hat-trick, adding to the legacy his father and grandfather started all those years ago. 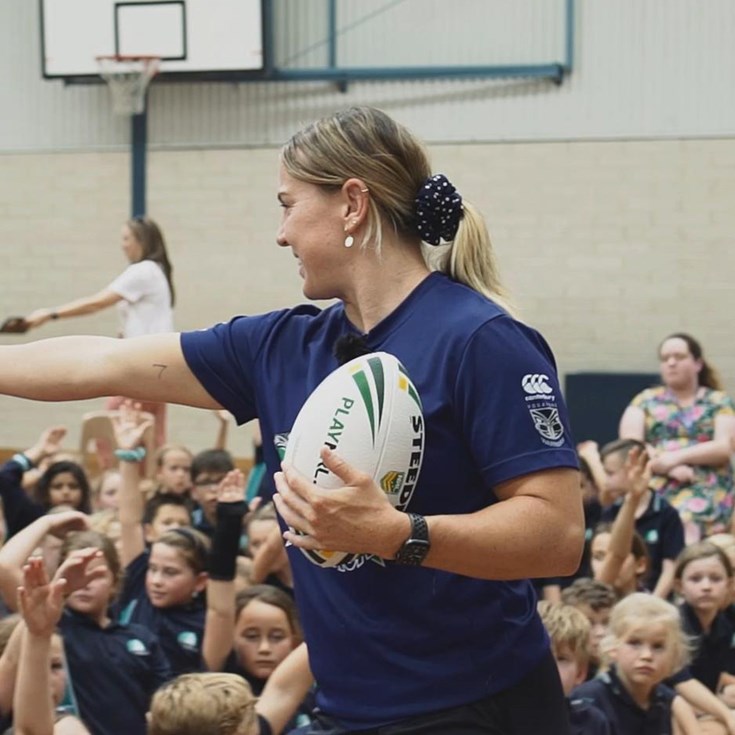