Wests Tigers fullback James Tedesco has made a successful return to Campbelltown Stadium in his first competitive hit-out at the venue since breaking his jaw against the Titans in Round 23 last season.

The incumbent Blues No.1 had some slick touches in his 57-minute stint on Friday night as the Tigers fell at the death to a near full-strength Cowboys side 18-16 in Sydney's south-west.

While Tedesco was on hand to wow the locals, another 'JT' – Johnathan Thurston to be exact – proved the match winner with his 75th-minute sideline conversion the difference in the end.

In what turned out to be a match dominated by stoppages, Matt McIlwrick firmed as the Tigers' starting hooker for Round 1 on the back of a solid 60-minute showing that should have coach Jason Taylor confident he can fly solo with Matt Ballin and Jacob Liddle batting to be fit for the season opener against Souths.

In other selection news, Moses Suli got the nod on the left wing alongside Jamal Idris, but the destructive duo were starved of any meaningful attacking opportunities before the hulking centre was eventually taken off after an hour.

The Cowboys will be sweating on the fitness of winger Antonio Winterstein who was helped from the field in the sixth minute with a right ankle injury that could open the door for teen-sensation Kalyn Ponga to add to his two NRL games. 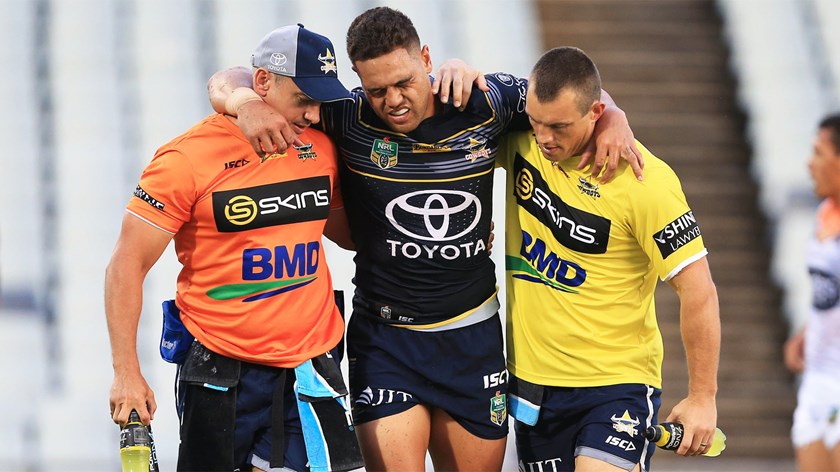 Winterstein wasn't the only concern with teammate Kyle Feldt and the Tigers' Joel Edwards taken from the field after separate head knocks in the space of 60 seconds.

The Cowboys finally clicked into gear in the 17th minute when Johnathan Thurston set up halves partner Michael Morgan for the game's opening try with a harmless grubber that caused confusion at the back, allowing the No.6 to stroll over.

That seemed to wake up the Tigers who, after back-to-back repeat sets, levelled the scores after the usually-reliable Thurston mucked up his attempt to bat the ball dead allowing David Nofoaluma to pick up the crumbs and score.

Fantasy coaches would have been licking their lips when James Tedesco nailed the sideline conversion, but it's unlikely he will continue in the role when Mitchell Moses returns.

The good times kept rolling for the black and golds when barnstorming back-rower Josh Aloiai crashed through close to the line to give his side the lead, but it didn't last long as Ben Hampton did his bench utility chances no harm to score a crafty solo try in the shadows of half-time.

A dour second half was brought back to life in the 65th minute when Nofoaluma fell on a loose ball in the in-goal to give his side the lead before Watson Heleta produced a stunning try-saver to deny Lachlan Coote a certain four-pointer.

The Cowboys wouldn't be denied five minutes from full-time when Kane Linnett took advantage of a left-edge overlap to crash over, before Thurston stepped up like he always does to nail the sideline conversion to win them the game.

Taukeiaho takes it up against Panthers