The Wests Tigers have spoiled Robbie Farah's first NRL game in South Sydney colours, romping to a comprehensive 34-18 victory over the Rabbitohs on a slippery Friday night at ANZ Stadium.

It was a clash that saw several huge hits, a worrying knee injury to South Sydney fullback Greg Inglis and some scintillating performances from Wests Tigers' fullback James Tedesco and debutant Moses Suli.

Farah made his intentions felt early with a solid hit on former teammate Chris Lawrence, but the Tigers returned serve with a number of big shots on the Bunnies in a clear sign Jason Taylor's men were up for this match.

‌It was an unhappy start for the debutant Suli, who dropped the ball with his first touch just two minutes in, but later showed some attacking brilliance to play his part in several Wests Tigers tries.

Souths took advantage of possession of the error and Bryson Goodwin opened the scoring in the fifth minute on the back of a penalty for contact on Luke Kelly after a mid-field kick.

Some quick hands from Greg Inglis found Goodwin out wide and the experienced winger stepped inside Tedesco to open the scoring for the Rabbitohs.

The biggest talking point to come out of the game was the injury to Inglis, after the star fullback fell awkwardly chasing a high kick on Tedesco and played out an hour of the game before coming from the field.

Momentum shortly swung the Wests Tigers way after a Farah error, with skipper Aaron Woods providing a handy offload for a back-line spread out wide for Suli who stepped inside to find prop-forward Ava Seumanufagai in support for the Tigers' first points.

Things got heated between the sides with Moses having words with Farah after a tackle that left the five-eighth clutching at his ankle. The following play saw a huge hit from Sam Burgess on Elijah Taylor, before Hymel Hunt clashed with Seumanufagai and was ruled out for the rest of the game.

The Tigers kept their cool though and extended their lead with Tedesco lighting up ANZ Stadium, beating four Rabbitohs defenders to force his way to the line before setting up Chris Lawrence three minutes later.

The injured Inglis would get Souths back into the contest on the stroke of half-time, hobbling his way over untouched after a cross-field kick from Cody Walker bounced nicely for the Kangaroos star to go over on the wing.

After the break, both sets of fans would have not even returned to their seats in time for the Tigers to go the length of the field. Suli was again the man to find space before Tedesco linked with Moses for the Ryde junior to sprint 60 metres and score under the posts.

Walker did his best to earn a repeat set for the Rabbitohs, but Tedesco could not be contained and made it look easy to get back into the field of play.

The South Sydney five-eighth was in everything in a bid to get his side back into the game, busting through once more before the final play went down.

There was no stopping one man though, and that was Tigers fullback. A half-break turned into further points for the joint venture, when Suli was on the end of a Tedesco pass before popping a ball for Brooks to blow the lead out to 22 points.

After his two try assists, Suli had a four-pointer for himself only three minutes later when Brooks and Lawrence combined to put the 18-year-old over to cap a night out he will not forget anytime soon.

Souths scored the final two tries with 10 minutes remaining to head into double figures, with Goodwin scoring twice to get a well-deserved hat-trick on the left wing.

Ultimately though the night belonged to Jason Taylor and the Tigers, who start the 2017 season with all the momentum. 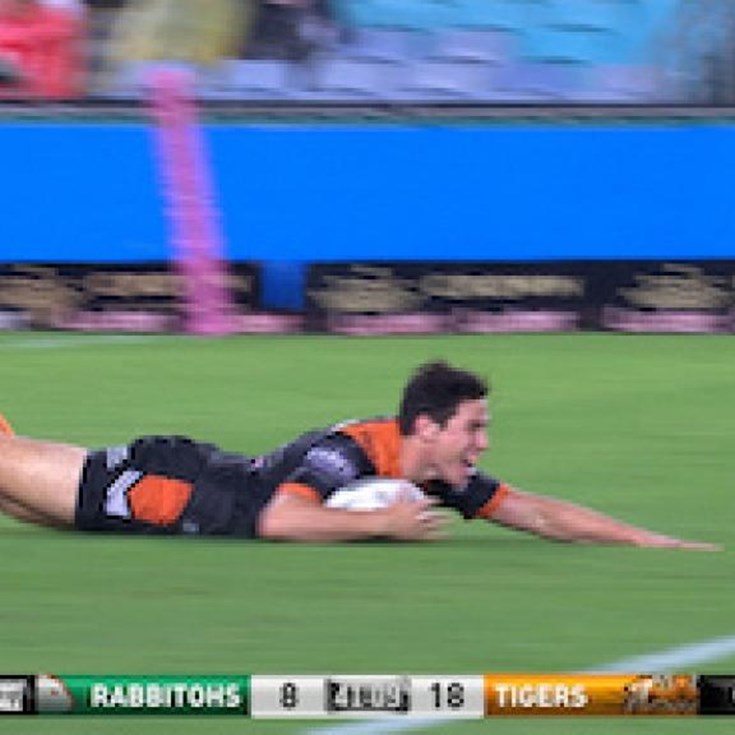