Breakthrough rookie seasons are traditionally hard to back-up from but Titans pair Kane Elgey and Ashley Taylor believe that by working together they can help each other to avoid the dreaded second-year syndrome.

Having missed the entire 2016 season with a knee injury, 2017 is Elgey's second season in the top grade while Taylor enters the Telstra Premiership with the expectation that comes with winning the Dally M Rookie of the Year award last season.

The most recent Rookie of the Year winners in Jack Bird, Luke Brooks, George Burgess and Adam Reynolds have all gone on to forge strong NRL careers, and having entrusted them with the playmaking responsibilities of the team the Titans are hoping for the same with Elgey and Taylor.

They were each named the NYC Player of the Year in consecutive seasons in 2014 and 2015 but must now face the task of delivering the skill they have shown as rookies on a weekly basis against opposition teams that are much wiser to their ways.

Draw Widget - Round 1 - Titans vs Roosters

With a left (Elgey) and right-foot (Taylor) combination and the mix of a runner in Elgey and an organiser in Taylor the pair would appear on the surface to be perfectly matched, providing they can handle the pressure that comes with a standout rookie season.

"They talk about the second-year syndrome and that's what we both don't want to catch because it's both our second years," Taylor told NRL.com.

"I think it's just expectation. Everyone really wants you to succeed and you try your very best and sometimes you try a bit too hard. The main thing is to take it as it comes and let it roll. Don't try and be dominant on the field when you don't have to be.

"What happens with other players is they think they have to create something on every play or every set but it's just about playing the same role as you did last year and taking the game as it comes.

"I'm just going to go out there with the same mentality as last year, think about the game and think about my role in the team and just be the best I can."

Elgey has had to endure an agonising wait before commencing his second year in the NRL after rupturing his ACL in pre-season training last January.

Such was his determination he very nearly forced his way into the team to play the Broncos in the Elimination Final last September and he knows his combination with Taylor will take some time to develop.

Although they played against each other on a couple of occasions in the under-20s competition, their only game as a halves pairing was in the club's final trial against the Warriors where a raft of injuries and lack of possession due to a 15-6 penalty count against them gave them little opportunity to put any attacking formation into action.

"It's going to take a little bit of time, you can't expect a miracle to happen straight away but we're both young boys and we sort of know each other's games," Elgey said.

"We don't want to expect any miracles because there is a lot of expectation but if we just do our job for the team and get the win we can build from that.

"I'm probably more of a runner and he's got a great short kicking game as well at the line. We've got some good points and some points that we can work on but we're just going to have to gel together and I think we will."

Contracted to the club until the end of the 2018 season, both Taylor and Elgey expressed their desire on the eve of their first premiership game together to make it a long-lasting partnership.

"I love it down here on the Coast and hopefully we can be a long-term halves here," Taylor said

"No one knows what to expect from us. We've only partnered together once and that was in a trial and we didn't get to play 80 minutes with each other.

"I'm just looking forward to playing with our full team and really working well together."

Added Elgey: "We've only had that one trial so it's hard to say but if it all goes well it would be good to try and build a future here.

"If we can both try to stay here and play good footy and the team goes well I can't see why not." 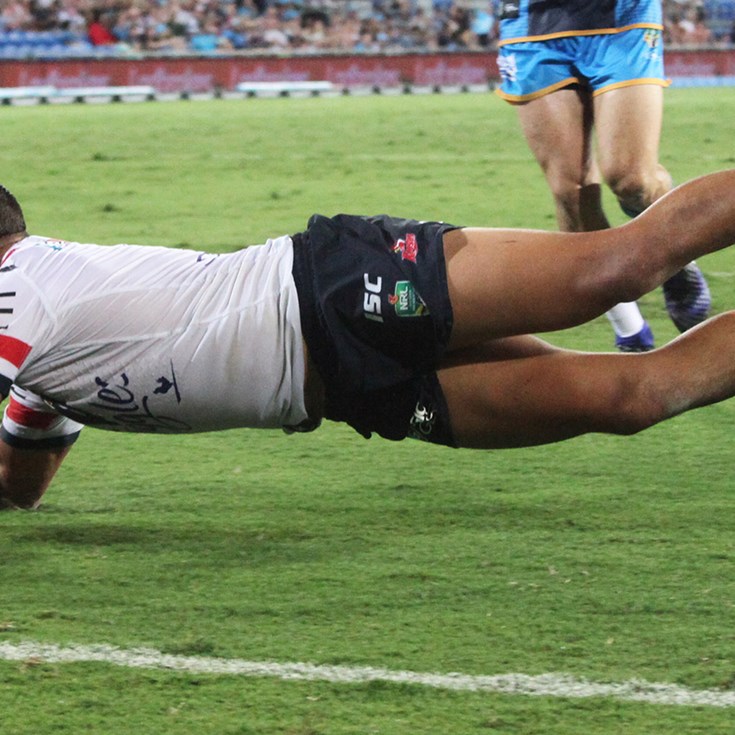 The most important signing in Titans history

Roosters not buying into the hype