Is it too early in the year to have a season-defining clash for two teams?

The Knights and Titans both come into their Round 2 clash after making courageous second-half comebacks in week one yet a win – or loss – in the second week of the season has the potential to dictate how their respective fortunes play out in the coming 24 weeks.

Given virtually no hope of upsetting the Warriors at Mt Smart Stadium last Sunday, the Knights started briskly to lead 8-0 and then after conceding 20 unanswered points showed great spirit to fight back and lead 22-20 with less than 10 minutes to play.

After a year in which they won only one game it will give the Newcastle faithful cause for optimism which will only be enhanced should they record a first-up win at home against Gold Coast.

On the flip side things could barely have started worse for the Titans who were steamrolled by the Roosters as they conceded 28 points in the first 40 minutes and have had to endure speculation regarding Jarryd Hayne's commitment to the cause.

For a team that many believed had the roster capable of pushing for a top four finish in 2017, a second straight loss will only see the glare of the spotlight intensify.

The cruel ACL injury suffered by young Knights fullback Dylan Phythian has necessitated the one change for Newcastle with Brendan Elliot named at No.1 while the Titans have named an unchanged 17, Kevin Proctor's shoulder injury the only concern.

Why Knights can win: They may have been exposed on the edges themselves somewhat but the Knights showed that with an even share of possession they can pile on the points in quick time. After jumping out to an 8-0 lead against the Warriors the Knights were down 20-8 midway through the second half before scoring three tries in the space of 12 minutes to hit the lead. The shift of Sione Mata'utia into the back row makes their left edge particularly potent with an excellent finisher on the end of it in Nathan Ross who kicked off 2017 with a double. The Titans' right edge struggled to contain the Roosters attack so expect coach Nathan Brown to explore that avenue regularly.

Why Titans can win: Wins come on the back of points and points come on the back of pressure and in Ashley Taylor the Titans boast one of the best short kicking games in the competition. After an awful first half against the Roosters, the Titans forced two line dropouts in the second half to build pressure and score 18 unanswered points to narrow the gap to 10. Taylor was at the heart of the comeback with a 40/20, a grubber kick that should have led to a try for Chris McQueen and a bomb for Jarryd Hayne to score. His kicking game can prove the difference on Saturday.

Key match-up: Brock Lamb v Kane Elgey. Two halves in the infancy of their NRL careers face a pivotal game early in the season. Both were responsible for the most kick metres for their teams in Round 1 and need to show composure to get a win on the board in week two.‌‌

The history: Played 16; Knights 9, Titans 7. Last week's first half debacle will have brought up painful memories for William Zillman, Ryan James and Anthony Don, the only three survivors of the Titans team that found themselves trailing 36-0 at the break in Newcastle in Round 16, 2013. The Titans' record in Newcastle reads four wins from their nine previous visits including two of their past three. The most extraordinary meeting between the sides in Newcastle came in Round 9, 2010 when the Knights equalled the record for the highest score by a losing team in going down 38-36 in a 14-try extravaganza.

What are the odds? It seems the Knights won some supporters in Round 1 because Sportsbet has taken twice as much money on them to upset the Titans in Round 2. An incredible 85 per cent of support is with Newcastle in line betting thanks to a healthy points start going their way. Latest odds at Sportsbet.com.au

NRL.com predicts: The team that can hold their nerve will claim the two points. Like last season, Newcastle were guilty of competing for long periods only to concede points in rapid succession against the Warriors and they need a bright start to build confidence and put pressure on the Titans. The Titans were exposed badly through the middle last week and may struggle to contain the energy of the young Novocastrians. Knights by four points. 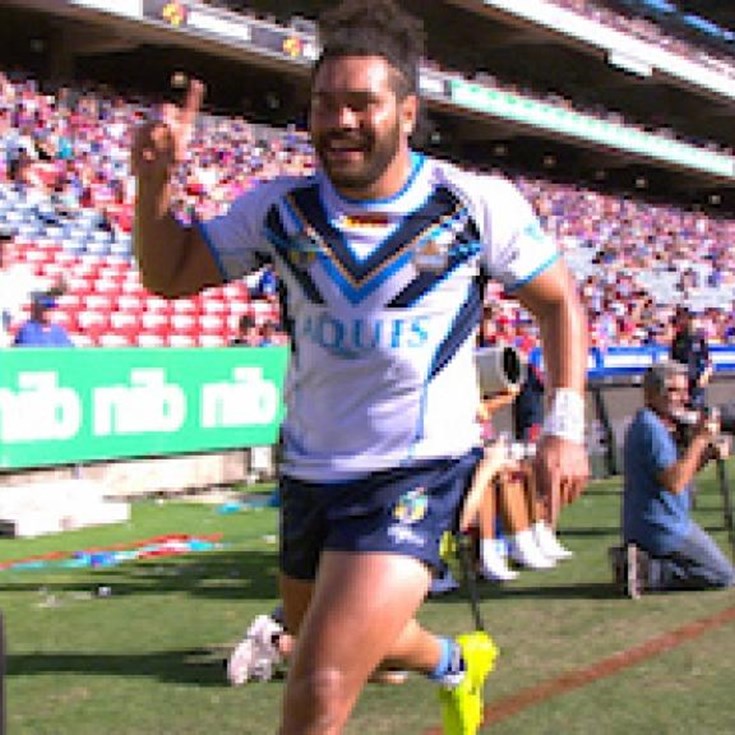