A strong defensive display and equally good attack from the Penrith Panthers has seen the visitors thrash the Wests Tigers 36-2 at Campbelltown Stadium on Sunday.

The Panthers conceded just a single penalty goal in a dominant 50-minute stanza that all started with 10 minutes left before the half-time break.

The left edge for the Panthers were on fire with rookie winger Dylan Edwards and utility back Tyrone Peachey producing standout performances.

Edwards made a dominant return to the top grade, racking up over 170 metres and saving a certain Tigers try from left-winger Moses Suli in the opening minute of the game.

His left edge partner Peachey was also one of the Panthers' best with over 180 metres and an impressive four line breaks.

Both sides were guilty of blowing try-scoring chances in the opening half, with the Wests Tigers giving up two opportunities, before the Panthers returned serve with two of their own.

It was an unhappy start for Suli, who dropped the ball over the line before Mitchell Moses was ruled to have passed the ball forward to an unmarked David Nofoaluma minutes later with the tryline wide open.

Panthers five-eighth Te Maire Martin also had a case of the dropsies in attempting to get the ball down, and Matt Moylan's kick into open space was just too heavy with Nathan Cleary in chase.

Panthers forward Bryce Cartwright left the field after 15 minutes with an ankle injury and did not return.

‌Former Panther Elijah Taylor conceded a penalty on Peachey and the visitors opened the scoring with a goal from in front to take an early lead.

Wests Tigers responded with a penalty goal of their own to Mitchell Moses, leveling the game up at 2-all with 10 minutes to play in the first half after Peter Wallace was caught in the ruck.

A huge hit on Tedesco from Leilani Latu and debutant Viliame Kikau provided the visitors a final flurry of points heading into the break to blow the game wide open.

Moylan provided the cutout pass for winger Dean Whare to charge over the line, before 21-year-old Kikau slipped through the Wests Tigers' defence with just his second touch.

With the siren sounding, Peachey was again in on the action on the left edge, busting through Tigers winger David Nofoaluma before finding wing-partner Edwards in support for the first four-pointer of his Telstra Premiership career.

It didn't get much better eight minutes into the second half when Tedesco lost the ball in an attempt to score, before Tigers centre Kevin Naiqama was next to relieve the pressure with an error close to the line.

Penrith started to aim up in defence and took further advantage the following play with Latu plucking the ball out of the air from a Martin kick to barge his way over the line.

Whare was over for his second try after stepping inside Michael Chee-Kam to deliver the Panthers' fifth of the afternoon.

Brooks kicked the ball into the grandstand off the restart which enabled Cleary to cross courtesy of some creative lead-up work from Peachey and Edwards.

It was a dominant response from the Panthers, who were under pressure all week following a dismal performance against the Dragons in Round 1. 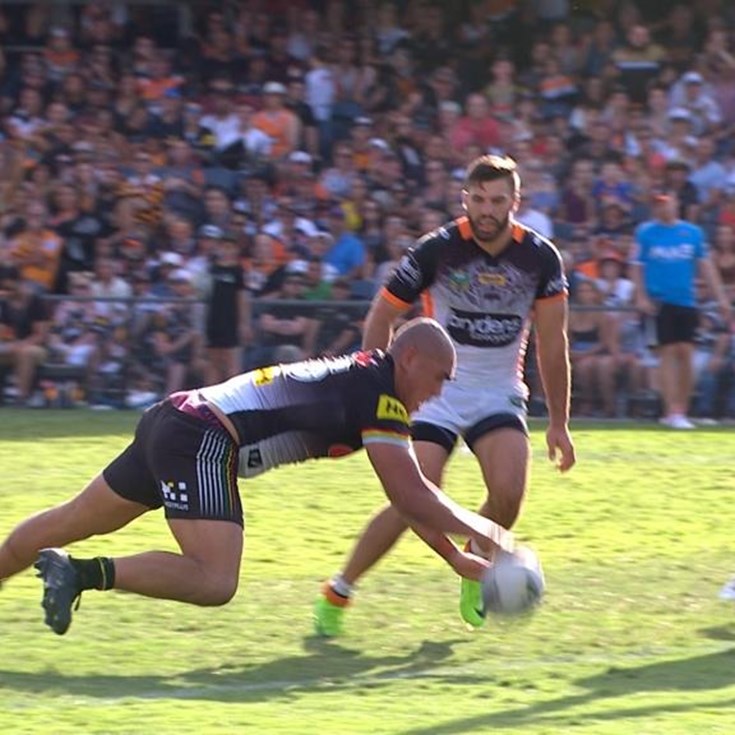