The NRL Telstra Premiership enters new territory this Friday night when the Canterbury Bulldogs take a 'home' game against the Warriors to Forsyth Barr Stadium in Dunedin, New Zealand for the very first time.

Both sides will head into Round 3 with a full week's rest behind them, after the Bulldogs went down 28-24 to the Roosters last Thursday and the Warriors were overrun by the Storm 26-10 on Friday.

Canterbury have two forced changes, with fullback Will Hopoate and winger Kerrod Holland both facing at least a month on the sideline with injuries.

In their place Junior Warriors graduate Brad Abbey will debut against his former club in the No.1 jersey and Marcelo Montoya is named on the wing, in an otherwise unchanged 17.

Coach Stephen Kearney has opted to bring some extra experience into the starting side for the Warriors, with veteran wing Manu Vatuvei selected in favour of Tuimoala Lolohea and seasoned forwards Jacob Lillyman and Bodene Thompson both promoted from the bench.

Bunty Afoa and Charlie Gubb drop back to the interchange after starting in the first two rounds.

Although this will be the first NRL match to be played at Forsyth Barr Stadium, the Warriors have previously played a trial match there in 2013 while the Kiwis faced England at the ground a year later as part of the Four Nations.‌

‌Why the Bulldogs can win: They may have started the year with back-to-back defeats, but the Bulldogs' resilient attitude has been something to admire over the opening fortnight of the competition. Down 22-8 last week with less than half an hour remaining, the Dogs wrestled back momentum and scored twice to reduce the gap to 22-18. While they leaked a late try to kill off the comeback, Canterbury showed a similar reaction to adversity in Round 1 when they went down 10-0 after just seven minutes but forced the Storm to grind out an eventual 12-6 win.

Why the Warriors can win: Last week in torrential rain the Warriors still managed to complete at 86 per cent, finishing all but five of their 36 sets against Melbourne. If they can bring that sort of ball control to Dunedin then they are going to prove tough to stop. The Warriors are at their best when they can dictate terms with the ball in hand, and their lethal backline can break through even the toughest defensive lines when given enough opportunities. Respecting the Steeden and building pressure will be a key for the Kiwi side, and they have shown they can do it.

The History: Played 34; Bulldogs 19; Warriors 13; Drawn 2. The Bulldogs possess a dominant recent record against the Warriors, with five wins from their last six meetings. The last three games between these two sides have been decided by four points, and you have to go all the way back to 2012 to find a Bulldogs v Warriors match where there was a winning margin of more than eight.

‌
What are the odds: Customers think Sportsbet have got it wrong by posting the Bulldogs as outsiders against the Warriors, with an incredible six times the amount of money bet on Canterbury. Even though the match is being played in New Zealand, there's more money on a Bulldogs 1-12 win than there is on every other winning margin option combined. Latest odds at Sportsbet.com.au.

NRL.com predicts: Both clubs faced the Storm in near identical conditions over the first two weeks of the competition, which gives us a reasonable idea of how they should shape up against each other ahead of Friday night. While the Bulldogs have shown they are competent on both sides of the ball, the way the Warriors handled possession and soaked up defensive pressure at times last week suggests they have the quality to punish a team like Canterbury right now. Warriors by eight. 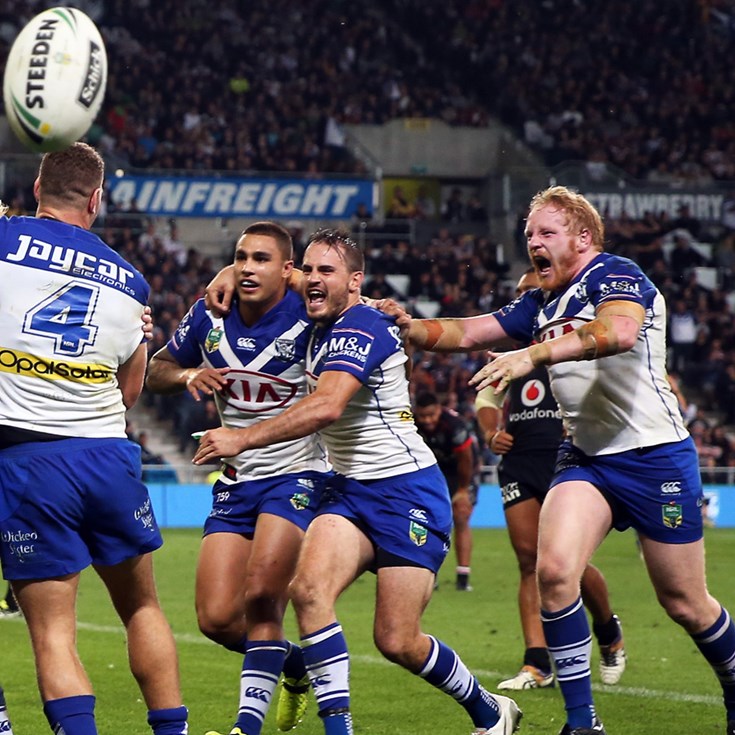 Bulldogs too good for scrappy Warriors

Converting chances the focus for Warriors