However you decide to view the Round 4 clash between the Panthers and Knights, the reality is both sides have only managed one win to begin 2017 and find themselves next to each other in the bottom eight of the Telstra Premiership ladder.

Despite one club being labelled premiership favourites and the other predicted to receive their third successive wooden spoon, this contest shapes as nothing but a danger game for the Panthers, with Anthony Griffin's side expected to win and win easy according to the bookies.

As we've seen in Round 3 with tipsters having a shocking week, the task of expectation is not always an easy thing to overcome, and predicted one-sided affairs don't always work out the way in which you think.

Nathan Brown's outfit have shown vast improvement to last season in their three matches so far, including a solid showing in New Zealand and putting up a strong fight in their six-point defeat to the Rabbitohs last weekend.

In fact, when you consider the Knights averaged only 12 points per game in 2016, to have now doubled it at 24.6 – the third best in the competition so far – it is safe to say the Novocastrians are indeed on the rise.

Some costly errors in pivotal stages are proving the difference for the Knights with many of the inexperienced sides still learning how to convert good performances into victories.

The Panthers were unlucky against the Roosters in a high quality game of football that should prepare them well for what the Knights throw at them defensively after only conceding 16 points in the last two fixtures.

Former New South Wales forward Trent Merrin is starting to benefit from match fitness after playing a season-high 76 minutes against the Tri-colours while the form of centre Tyrone Peachey to start the season has left former Kiwi international Peta Hiku without a spot in the Panthers backline.

The left edge of the Knights is firing with seven tries between Peter Mata'utia and Nathan Ross, however the right side is struggling in defence, conceding eight tries down that edge. Maroons outside back Dane Gagai will have his hands full with the in-form Peachey and will need a huge game if the Knights are to have any chance.

In team news, the Panthers welcome back Bryce Cartwright from an ankle injury in a case of perfect timing with fellow forward James Fisher-Harris sidelined with a fractured eye socket.

For the visitors, Josh Starling escaped suspension for dangerous contact on Rabbitohs back-rower Kyle Turner with an early guilty plea and takes his place in the starting No.10 jersey, with veteran Anthony Tupou named in the reserves again for the Knights.

It is new territory for Knights coach Nathan Brown being able to name back-to-back unchanged line-ups in the last fortnight despite the club's injury toll now up to eight players missing.

Why the Panthers can win: Their forward pack should be too strong for the Knights. After a sluggish start against the Dragons in their season-opener, the Panthers have been moving forward on the back of possession, and points have come off the back of that momentum – something the Knights lack, having not yet gone over the 1500 metre mark yet this season.

Why the Knights can win: They've shown in 2017 they're in every contest, only losing their two games by a try or less and they'll head to Penrith having won five of their last eight at Pepper Stadium. It was no secret the Knights struggled to score points last season, but their defence is also on the improve having missed only 70 tackles (23 per game) in comparison with the Panthers' 105 (35 per game) in the opening three rounds.

The history: Played 43; Panthers 17; Knights 23; Drawn 3. Recent history suggests Anthony Griffin's outfit have been in control in previous seasons, winning four of the last five, however the Knights were dominant against the Panthers for a number of years during the Andrew Johns era and maintain a strong record overall. Only recently have the Panthers managed to peg their home ground advantage back.

What are the odds: Sportsbet has actually taken more individual bets on Newcastle in the head-to-head market, but they've been smaller bets in comparison to those on Penrith. In fact, there are four times as many dollars invested on the Panthers overall. Latest odds at Sportsbet.com.au

NRL.com predicts: You just get the feeling if the Panthers show up, they'll do enough to beat the Knights as there is too much talent in their line-up. The Knights have shown they're leaving nothing in the tank and going into games with nothing to lose, so you shouldn't completely write them off either with a decent record at Pepper Stadium. Despite the Knights' efforts, we get the feeling the Panthers will control the middle and have too much in attack when it counts and will notch up their first win at home for the year. Panthers by 13+.

It was like my debut all over again: Hiku
Nathan Cleary wants his dad coaching again
Rossdog takes the focus off try-scoring
NRL suits-up with all new Marvel Heroes 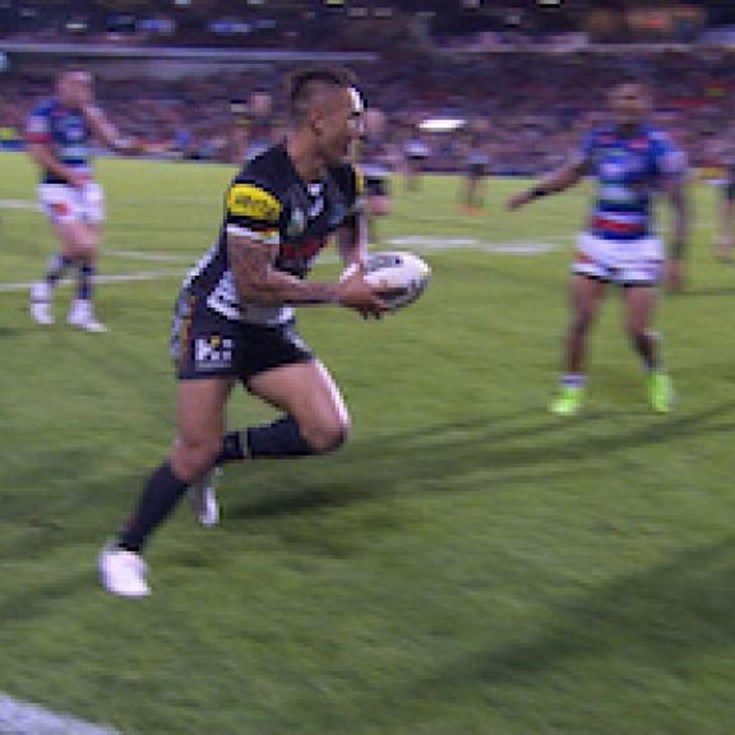