The Brisbane Broncos have grinded their way to a thrilling 13-12 victory over the Canberra Raiders in a scrappy affair at Suncorp Stadium.

Jordan Kahu was the hero in a see-sawing clash, kicking an outstanding field goal late in the game to ice it for the home side.

Conditions were tough for both teams, with rain drenching Brisbane all day to create a waterlogged field that was heavy under the legs for two large forward packs.

With much of the game in the middle, Brisbane's milestone man Andrew McCullough had a field day, making 61 tackles and scoring a try to celebrate his 200th match in the best way possible.

But it wasn't always looking like it was going to be a happy occasion for McCullough, with the Raiders putting together an immense second half comeback that almost stole victory.

After a try-less first half, the game began to open up in the second stanza, with Brisbane stealing the momentum straight after the break.

It was McCullough who could do no wrong, scoring under the posts to break the game open. Kahu had no issues with the conversion to make it 8-2 in the 45th minute.

Darius Boyd showed his class in the 51st minute, with the Broncos captain dummying to break through the Raiders' defensive line and crossing in the right corner. Kahu's conversion was unsuccessful, bouncing off the post to keep the score at 12-2.

But Canberra hit back as Jordan Rapana showed why he's one of the NRL's best wingers, acrobatically scoring in the right corner to get his side back into the game in the 64th minute. Jarrod Croker hit the uprights with his unsuccessful conversion and the scoreline stayed at 12-6 in Brisbane's favour.

Rapana went from hero to villain off in a matter of minutes, dropping a simple kick-off to put his side under immense pressure, but Canberra survived with resolute defence that kept the Broncos out.

The Raiders suddenly looked like match winners in the 72nd minute, making a break down the right edge before Jack Wighton found Blake Austin with a beautiful pass to put the five-eighth under the posts. Croker's conversion made it 12-all and Brisbane were suddenly involved in another thriller.

But Brisbane winger Kahu showed poise minutes later, kicking a field goal from 30m out in the 75th minute. His shot bounced off the inside of the post to just make it over – much to the joy of the Suncorp Stadium crowd.

That was the match winner, with the thrilling clash turning it on after a low-scoring first half.

Things started brightly for Brisbane, with the scores opening early in the first 40 minutes as the Broncos took just five minutes to get on the board.

The Raiders only had themselves to blame, giving away a silly penalty that gave Kahu the easiest of penalty goals from 30m out straight in front. The New Zealand international converted with ease to make it 2-0.

A superb chip and chase from halfback Ben Hunt almost extended Brisbane's lead, but a scrambling Canberra defence stopped Alex Glenn just metres from the try-line to leave the score at 2-0 in the 26th minute.

A 34th minute intercept from young Canberra winger Nick Cotric saved the Raiders again, with the 18-year-old leaping to catch a Matt Gillett pass that would have surely resulted in a try for Kahu.

That play gave the Raiders some momentum and they took advantage, kicking a penalty goal in the 37th minute to level the scores at 2-all.

That's how it stayed heading into the break, with both teams hoping for an improved performance in the second 40 minutes.

Both were a lot better in the second half, but it was Brisbane who held on in a breath-taking finish. 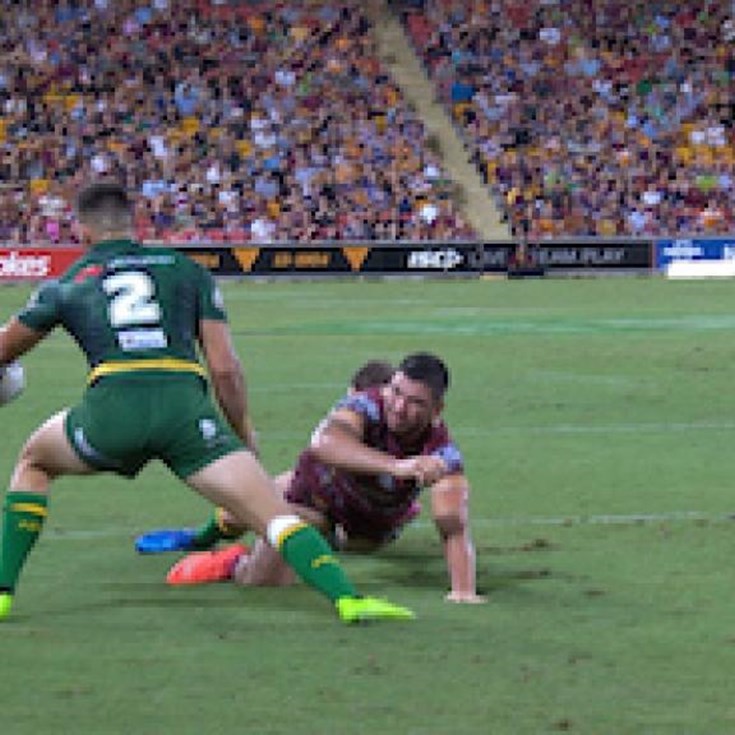