In a sign that even the greatest make mistakes, Brisbane Broncos coach Wayne Bennett has admitted it took him too long to realise that winger Jordan Kahu was and still is the best field-goal kicker at the club.

The comments came after Kahu slotted the match-winning field goal in Brisbane's 13-12 win over the Canberra Raiders at Suncorp Stadium on Friday night.

It was the Broncos' first one-point win in 364 days, with the last coming almost exactly a year ago against the North Queensland Cowboys at the same venue.

This season has already been plagued by close losses for Brisbane, who were beaten by the Cowboys by one point in Round 2 and the Melbourne Storm by two points in Round 3.

The result against North Queensland could have been different, with halfback Ben Hunt refusing to take a field goal shot and five-eighth Anthony Milford squandering countless opportunities in front of goal.

It was then that Bennett realised his side needed another option but it took until the week of the Raiders clash for the master coach to put the onus on Kahu.

Kahu has kicked a field goal for New Zealand on the international stage and now he has iced his first crack at it in the NRL.

The winger snuck into the middle of the field on Friday night, catching Canberra unaware as he calmly took the shot early in the tackle count.

It bounced off the post and sailed over, with the Suncorp Stadium crowd erupting in cheers as their side finally won a close game.

‌Previous to Kahu's heroics, the last four games to involve Brisbane and be decided by one point had all gone to the opposition, but that hoodoo was finally broken on Friday night and the relief was obvious on Bennett's face after the match.

"It was nice to win a close game," Bennett said.

"There wasn't any secret play to get Jordan the ball. It just took us a while to figure out that he was the best field-goal kicker we had.

"We didn't discover it after the Cowboys game, we were a bit slower than that.

"It took us a while to make the discovery, but we discovered it so that's the main thing.

"There was no shootout at our club because no one has wanted to kick them.

"Kicking them in training is one thing, but doing it in a match is a whole different scenario."

For the hero himself, it was a result of hard work paying off after hours and hours of practice behind closed doors.

26-year-old Kahu spoke to media after the match, revealing why it took his coach so long to realise his array of skills with the boot.

"I work really hard on my kicking and that includes field goals," Kahu said.

"I don't think Wayne or the boys have seen that because it happens behind the scenes. I put in the extra effort in my own time.

"I'm happy for them to back me to take those pressure kicks. I've always prided myself on being able to handle the pressure

"I was just happy to reward the boys for their hard work on Friday night."

It's a nice redemption story for Kahu who was left devastated by his shot clock mistake at the Downer Auckland Nines in February.

Needing to kick the field goal conversion to guide his side into the semi-finals, Kahu lost track of time in the dying seconds.

The shot clock sounded as he was about to take the kick and as a result Brisbane missed their chance to secure victory with Kahu's kick being waved away due to time violations.

For Kahu this was a driving factor behind Friday night's game-winning shot, and although he would have liked to deliver against the Cowboys two weeks earlier, he was just happy things went differently this time around.

"I had a little blunder at the Nines but I struck them pretty well for the most part of that tournament," Kahu said.

"I was actually floating around the Cowboys game in Round 2 wanting to take the kick, but my leg wasn't up to it unfortunately because of a bad cork.

"The ball didn't come my way then, but I'm very glad it came my way on Friday night." 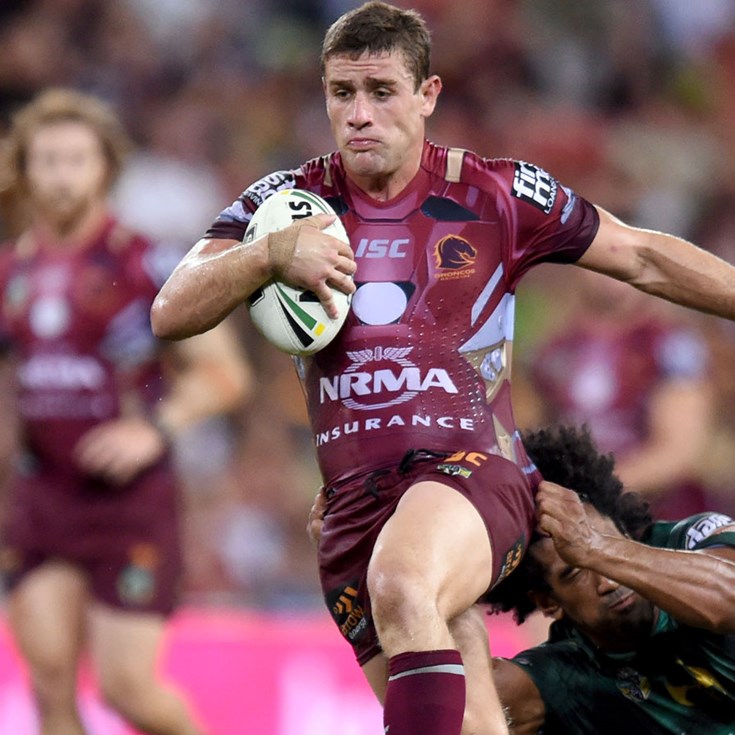