In what was a very scrappy 80 minutes of rugby league, Cronulla's aggressive in-your-face defence and Parramatta's frantic impatience with the ball eventuated in a 20-6 win for the premiers.

After seemingly months of will-he-or-won't-he fanfare about whether former Cowboys and Panthers hooker James Segeyaro would be released by Leeds to join the Sharks, the 26-year-old was rushed straight into Cronulla's 17 just four days and two training sessions after his signing was made official.

He then proceeded to spend a nervous 60 minutes on the pine as young gun Jayden Brailey helped the Sharks eke out a 20-6 lead.

No points were scored by either side during Segeyaro's 20-minute spell – which he kicked off with an error for an infringement on close mate Corey Norman – but he played with energy and provided reliable service out of dummy half.

"I thought he did a good job, showed some energy, got to dummy half, was tidy out of dummy half, that just relieves the pressure on Jayden," coach Shane Flanagan said after the game.

"That will evolve over time and as I've said plenty of times Jayden's a really good young hooker and we need to look after him as his career develops. 'Chicko' is the perfect example that can come on and as time goes on he'll pull sides apart when they're a little bit tired."

Eels cruel themselves with ill-discipline and impatience

The numbers don't make pretty reading for Parramatta coach Brad Arthur. A 64 per cent completion rate, a whopping 17 errors and eight penalties conceded and 65 more tackles made than their opponents.

The worst passage came in the 53rd to 55th minutes when a forced Bevan French offload handed over possession on the attack before dual ruck penalties against Corey Norman and Nathan Brown gifted the Sharks an attacking chance. Then a missed defensive read from a Paul Gallen offload handed James Maloney the match-clinching try.

"We just didn't give ourselves a chance – we lacked composure and a bit of patience," Arthur said.

"There were a couple of offloads on the try-line which hurt us but you're giving them chunks of possession in back-to-back sets."

Arthur said that impatience with the ball definitely needed addressing.

"We need to be prepared to build pressure, which we were the first two games. We were prepared to spend a bit of time there and not get flustered but they frustrated us and it showed with our attack, we were very scrappy."

In a match that few players from either team would be putting on their personal highlights reels, Sharks skipper Paul Gallen turned in a vintage performance.

Gallen said he had been primed for a tough forward battle following on from some mid-week mind games from his coach.

"They were pretty pumped before the game and had a bit of pressure put on their forwards to bash us up and they did that, but I said to the boys, cop your medicine, they'll hit you hard a couple of times but if you just keep banging down the door it will eventually open and that's what we did," he said.

Not yet time to worry for Eels

Eels fans hoping last week's frantic error-strewn loss on the Gold Coast was a one-off would have been bitterly disappointed with what they saw against Cronulla, but coach Arthur is confident the problems the team has at the moment can be easily remedied.

"I'm not worried, the effort's there, they tried very hard and defensively, physically we were pretty good," he said.

"When you put that much effort into a game of footy you need to come away with a better result than that."

Skipper Tim Mannah agreed the defence wasn't the problem so much as the poor ball handling that required the Eels to do so much of it.

"Defensively I thought the boys had a real crack but we shot ourselves in the foot and let ourselves down with the ball the last two weeks," Mannah said.

"Like Brad said, just a lack of patience and composure and some uncharacteristic errors that we shouldn't let into our game. It's something that we can fix but we've got to fix it pretty quick."

Recently re-signed Sharks back-rower Wade Graham looked like his night may have been over after an awkward ankle injury suffered in a collision with a teammate shortly before half-time. However after staying down for several minutes he regained his feet and managed to play on, though he will require further assessment to see if he's okay to play next week.

"It was an ugly one, I think it was a bit of friendly fire around his lower leg and it didn't look real good [at the time] but he typifies what we're about," Flanagan said.

"We're a tough, resilient football club led by Gal. that's what we want to be known for and we showed that tonight. Wade could have taken the soft option and come off but I knew he wouldn't have come off if he was capable of playing.

"He might need x-rays on his lower leg but he said he was okay. It might be just his ankle, a bit of a cork there, I'm not quite sure." 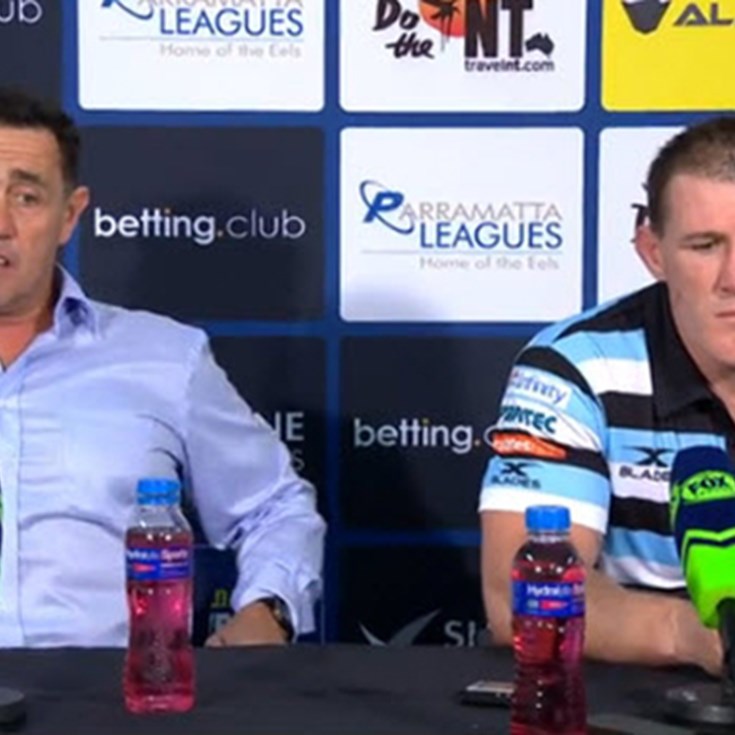 We can't rely on Norman: Eels