Gold Coast Titans coach Neil Henry says there is "no magic formula" to arrest his side's worrying trend of slow starts, but of greater concern is that it is a trend that has plagued the team for the past 12 months.

For the fourth week in succession the Titans gave up a double-digit lead to their opponents with Johnathan Thurston scoring a try and kicking three goals to get the North Queensland Cowboys out to a 10-0 lead after 19 minutes on Saturday night.

It is an exact repeat to their start to the 2016 season where they also gave up double-digit leads in their first four games yet while last year they clawed their way back to win two games in the opening month in 2017, they have just the one win and sit in 12th place on the Telstra Premiership ladder.

That they were able to fight back and actually lead 12-10 after 32 minutes against the Cowboys is a testament to their ability to get back into a contest but no team in the NRL can expect to start at least 10 points behind each week and win more than half their games.

"Obviously we need to look at our starts again and try and get an even share of possession at least, or even get it going our way and we haven't been able to do that so far this year," Henry said.

"I don't know if you've got the answer to it. I don't think there's any magic formula.

"We talked about starting better but if you gift a bit of field position at times...

"I thought the halves were fast and direct and we played some entertaining football but also some good football. We really tested their defence but we needed a bit more possession and we needed to stop them when they got up there a couple of times.

"We've used a lot of energy and Ryan [James] and Jarrod Wallace are playing big minutes up front and doing a lot of work.

"We feel if we can get that possession our way that our attack's good enough to worry other teams."

The opening 20-minute onslaught where the Cowboys enjoyed an 80 per cent share of possession and failed to make a single error came back to haunt the Titans late in the first half when they conceded two tries in the space of five minutes to trail 20-12 at the break.

A try to winger Tyronne Roberts-Davis 15 minutes into the second half narrowed the margin to four points but two tries to towering Cowboys back-rower Coen Hess again shot North Queensland out to a 16-point lead.

While the 17,000 fans in attendance and those watching at home marvelled at the 20-year-old's brute force to push past four Titans defenders to score both of his tries Henry was ruing a goal-line defence that couldn't stop him from scoring.

"When you make contact with a player carrying the ball six or seven metres off the try-line and you can't stop that ball being put down and there's a number of players around, we've got to be better than that," Henry said.

"There's no excuses for not stopping that ball getting over the line just by being underneath it.

"If we did that a couple of times on Coen Hess then the score might have been a bit different."

Henry made some late adjustments to his starting side prior to kick-off with Tyrone Roberts moving out of hooker to start at fullback in place of Tyler Cornish and Ryan Simpkins being promoted off the bench to start at hooker.

With first-choice hooker Nathan Peats not expected back for at least another fortnight and Karl Lawton playing 30 minutes just two weeks after suffering a dislocated shoulder, Henry indicated that it is that formation that is likely to line up against the Warriors next Sunday in Auckland.

"[Roberts] does get a bit of room out there to move and he carries the ball well so he can chime in. He's got a good pass so I think that's a good spot for him," Henry said of Roberts' shift to fullback.

"He's had to be a bit of a utility for us but he's good back there."

The major injury scare for the Titans was a shoulder injury to lock forward Agnatius Paasi who left the field after 24 minutes and took no further part in the game. 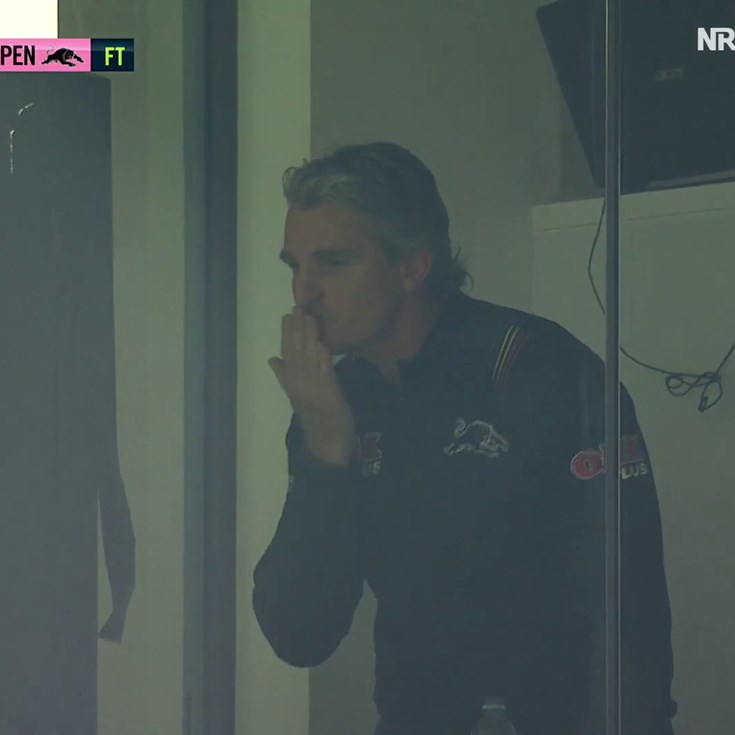 Cleary engages in some banter with Wests Tigers fans

Round 8: Everything you need to know to tune in

Cowboys, Knights squads to be boosted by scratch match