Teams should go on the attack more and ignore the easy two points after a penalty in the opponent's attacking zone, the shoulder charge issue is still clear as mud, Des Hasler hasn't done much wrong at the Bulldogs, the Warriors continue to frustrate fans and who is the quickest player in the NRL?

Yes or no to penalty goals?

But the stats so far this year would tell me I am wrong for doing so.

I hate teams going for penalty goal. I was so much a fan of Alfie Langer running up in his heyday and taking the quick tap.

And then having worked on Channel Nine for many years with the great Peter Sterling; he so often uttered in commentary when a side received a penalty in great attacking position "do what the opposition least want you to do".

Last Sunday I couldn't believe that the Wests Tigers not once, but twice kicked penalty goals in the first half against Melbourne. The Storm were playing poorly. They could barely get the ball out of their own half. With the Tigers dominating, why not go for the jugular? 14-nil could have been 20 or more.

However, here is the penalty goal statistic through four rounds of 2017.

From the teams that have kicked penalty goals in matches, 66 per cent have gone on to win. Perhaps it's not a conclusive figure, but it does back up a tactical shift we've had in the pursuit of points in games.

I'll just have to tell my story walking.

Are we all clear on what is, and what isn't a shoulder charge?

And it would seem judging by the Ryan James judiciary case on Tuesday night, we have a difference of opinion at the most crucial level.

I respect due process, and well done to Ryan's team for getting him off, but how could the match review committee possibly have got it wrong?

They look at the same video as the judiciary panel. This is their job. It either is a shoulder charge by the rules that are in place or it isn't. The review panel is not there to dish out frivolous charges.

Again, there is a perception among many fans that there must be two different interpretations of the rules. And that's not good for the game.

Should Des Hasler remain at the helm of the Bulldogs this year?

And I back my opinion up with the words of Laurie Daley speaking on Fox League's NRL 360 on Monday night. Who could the Bulldogs sign right now who would be better qualified than Des?

In five years at the club he's steered his side to the finals each year, and that includes two grand finals. On that basis alone, Hasler deserves to see out his contract at the very least. Celebrate the highs, but stick together in the lows I would have thought.

And then from a business point of view, how would paying Des's substantial contract out for the remainder of the season, and then also taking on the salary of a new coach, make any fiscal sense?

Bulldogs fans have every right to be shattered by last Saturday's thumping at the hands of Manly. But I can guarantee having dealt with the man for many years, that the bloke hurting the most about it would be Des Hasler.

He will be working harder than ever to turn things around.

Who is the fastest player in the game?

I have studied the NRL draw and marked down a few matches that might help provide the answer.

Now that the Cowboys' Gideon Gela-Mosby is in first grade, he has to be considered.

I'm hoping he's still in the top grade by Round 9 when North Queensland takes on a Parramatta side that includes Bevan French.

Then in Round 15 I want to see Josh Addo-Carr for the Storm chase Gela-Mosby.

And I'll wait in great anticipation for Josh Addo-Carr's Storm to tackle French's Eels in round 18.

In other words, I'll get back to you with an answer on this one about the second week in July!

What's wrong with the Warriors?

If they were a car, I'd start by changing the gearbox.

I go straight to the defensive stats and again this year they're already conceding on average 25 points a game. Even when they beat the Knights in round one, their opponents still posted four tries and 22 points.

I really do think the next two weeks at home could define their season. They are due to tackle the Titans and the Eels in Rounds 5 and 6. They have to win at least one, if not both before hitting a horror month.

Look at Rounds 7 through 10. The Raiders away. The Storm away. The Roosters at home. The Panthers away.

Could you possibly tip a Warriors side in any of those games if they potentially were 1 and 5 after next week?

What is the ranking on the top three games in Round 5?

I think the clear cut number one is the Storm at home to the Panthers.

I know Penrith are 0-6 at AAMI Park, and have beaten the Storm only once in their last 17 meetings, but you'd have to think they are more than capable this time around of worrying the undefeated Melbourne on Saturday night.

The number two game has to be the one featuring the other unbeaten side, the Roosters against the Sea Eagles at Allianz Stadium on Friday.

There has been no fluke to the Sea Eagles' last two wins against the Cowboys and the Bulldogs. As a matter of fact, some of their play has been quite brilliant.

And to complete the trifecta, I reckon number three is the Raiders against the Eels.

If both teams bring their 'A' game to GIO Stadium, this will be a classic. It has golden point written all over it.

And how lucky am I on Fox League this weekend getting to call the Storm v Panthers and Roosters v Sea Eagles matches? 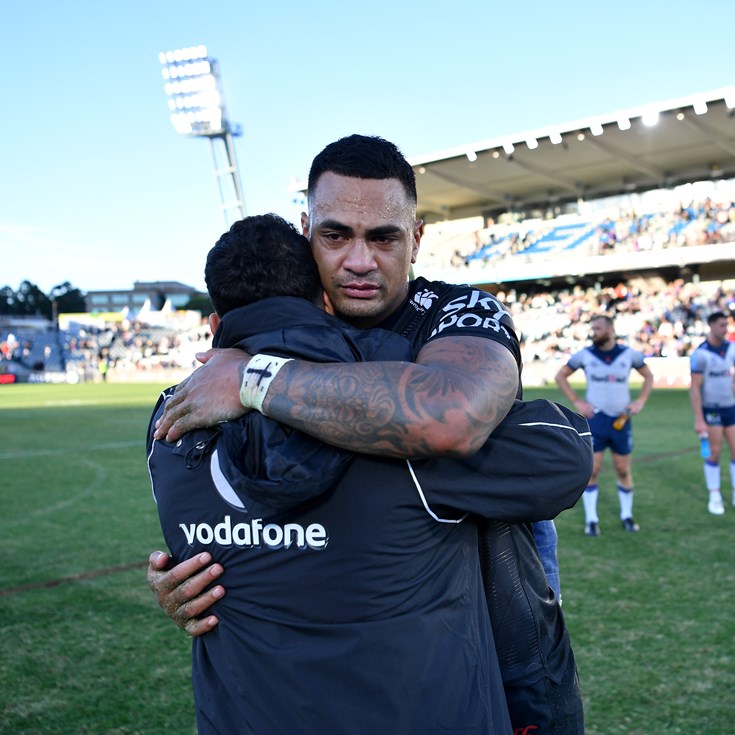 Spirit willing but talent lacking: Where to now for Queensland?