A red-hot Dragons outfit has easily disposed of a stuttering Wests Tigers 28-6 at Allianz Stadium but face a nervous wait on the fitness of fullback Josh Dugan who left the field with a hamstring injury.

‌Dugan pulled up lame in the 60th minute clutching at a hamstring, forcing Kurt Mann to finish the game at fullback. But it was the only headache for Dragons coach Paul McGregor on an afternoon that saw his captain Gareth WIddop produce a masterful 80 minutes of playmaking to create four of his team's five tries – including three in the first half for winger Jason Nightingale.

For the Tigers, fullback James Tedesco tried his heart out but looked frustrated by a lack of support and cohesion from his teammates and the side overall for the most part seemed unsure as to how they would create points despite a few periods of heavy possession in Dragons territory.

The Dragons had to soak up some early pressure as some great edge defence twice denied Tedesco from scoring before a beautiful Widdop cut-out ball and miracle Tim Lafai offload sent Nightingale over in the seventh minute.

A lovely Widdop cross-chip handed Nightingale his second barely five minutes later before the Tigers enjoyed another period of sustained pressure at the Dragons' end.

The Red V defence held firm again and once they escaped from their end via a piggy-back penalty a beautiful Widdop spiral cut-out landed perfectly for Nightingale's hat-trick in the 32nd minute.

Tedesco was denied for a third time shortly before half-time when he was found offside from an attacking grubber while Nightingale came centimetres from his fourth in the shadows of half-time but the Tigers defence just clung on to keep the deficit at 14-0.

The Tigers finally got a change of luck 10 minutes after the break when a Mitch Moses grubber clean-bowled Widdop in the Dragons' in-goal and Kev Naiqama pounced.

They got another break 10 minutes later when Nofoaluma somehow came away with an attacking bomb with six fresh tackles after Nightingale had looked to defuse it, but rookie winger Moses Suli couldn't pick up an attacking grubber and the pressure was off.

The missed chance proved costly immediately as a Cam McInnes line break sent the Dragons charging downfield before a precision Widdop grubber sat up perfectly for Lafai to score.

Another confused attacking set from the Tigers in the 73rd minute was immediately followed by a Dragons try as they went the length and Josh McCrone's grubber helped Nene Macdonald to a try.

A penalty goal in front for a goal-line drop out that went dead on the full was handed to Leeson Ah Mau in his 100th game wearing the Red V to seal the 28-6 win. 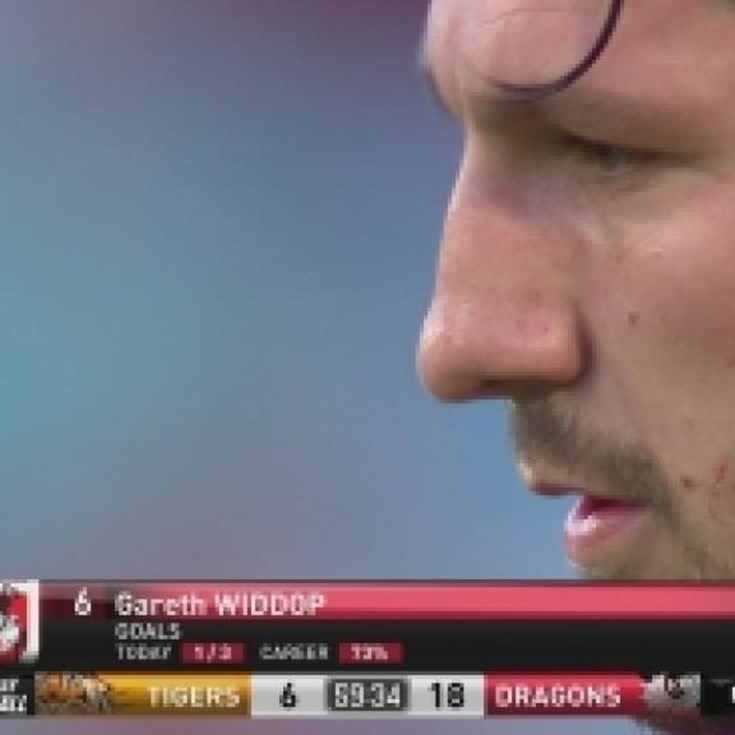