Cast your minds back three weeks. Manly had just been thumped at home by Souths to earn themselves back-to-back home losses to start the season and questions were being asked how long head coach Trent Barrett would last in the job. The Dragons had come crashing down to earth following a thrashing at home by the Eels, erasing memories of their bright Round 1 trouncing of Penrith.

Three weeks is a long time in rugby league.

If someone had claimed after Round 2 that this Saturday afternoon Round 5 fixture would feature arguably the two form teams of the comp you'd have sent for the men in long white coats.

But that's where we find ourselves with each of these teams entering this match on the back of three straight wins and in both cases all those wins were either by huge margins and/or against very strong teams.

Manly are unchanged other than welcoming back prop Darcy Lussick (wrist) to the interchange bumping Jackson Hastings to the reserves. What was, a month ago, a horrendously-depleted prop rotation is now a formidable one.

Dragons coach Paul McGregor has named Jason Nightingale to slot in at fullback for Josh Dugan (hamstring) with Euan Aitken (hamstring) returning at centre shifting Kurt Mann to the flank. Hame Sele is in line for an NRL debut after bumping Jacob Host off the interchange.

‌Why Sea Eagles can win: If you were tempted to dismiss Manly's wins against an understrength Cowboys and below-par Bulldogs you'd have a tougher time ignoring a high-quality victory over the previously unbeaten Roosters at Allianz on Friday evening. Other than the final 20 or 30 minutes of their Round 2 loss to Souths, Manly's defence has been remarkably resilient all season thus far and for the most part they haven't had trouble scoring points when they do get in range. The attacking form of strike centre Dylan Walker (two tries, 202 metres, three tackle busts last week) is getting better by the week.

Why Dragons can win: Everything the Dragons have done right this year has come off the back of relentless momentum generated by their forward pack with Paul Vaughan in particular, plus Tyson Frizell and Jack De Belin and co. really getting opposition teams moving backwards. This is the perfect scenario for a playmaker and England Test pivot Gareth Widdop has relished the conditions. He created four tries last week and had the ball on a string with his kicking game. After his playmaking appeared stunted and unimaginative last year he looks a reborn player in 2017.

‌
The history: Played 24; Sea Eagles 9; Dragons 15. Perhaps surprisingly, the Red V has had the wood over the northern beaches boys since the 1999 merger between the Dragons and Steelers. However Manly has the recent edge with four wins out of the past five meetings while the Dragons are also on a four-game losing run at Lottoland.

What are the odds: The money is running three-to-one in favour of Manly according to Sportsbet, yet Dragons 1-12 is the most popular selection in the winning margin market. Youngster Brian Kelly is the most popular in the first try-scorer market following on from his great start to the season. Latest odds at Sportsbet.com.au.

NRL.com predicts: Very tough game given the impressive recent form of both teams. The Dragons are every chance of making it four straight wins but we'll take their poor record at Lottoland as the tie-breaker and tip Manly by two points. 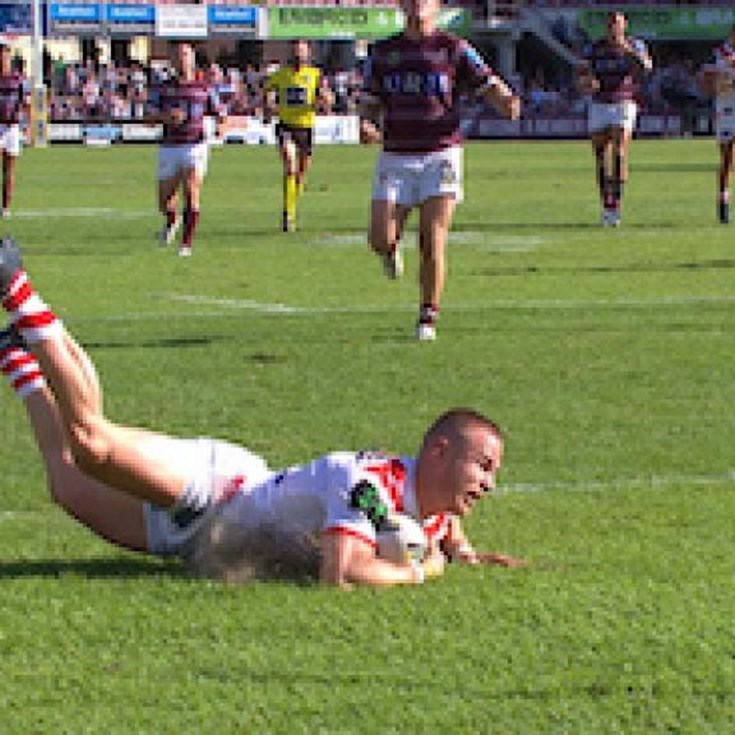