Each week I do my best to have one day without rugby league. In the Big League office, Tuesday is a wretched beast in which most the work is done – writing the news and features, doing last-minute interviews, finalising the cover and manually changing every team list and stat you read on those pages.

It requires the kind of brain power you can only produce once every seven days (if you're lucky) and most of the time we leave the office cross-eyed and brain dead.

Wednesdays are recovery, hence my no rugby league rule.

I don't look at social media, I don't watch the news and I try and avoid mentioning work altogether. For that one precious day a week I'm just a regular lady living her life, consuming as much trashy television as humanly possible.

At least that's the plan.

This week was another failed attempt at ignorant bliss.

I didn't have to watch some 'reality' drama on MTV, there was plenty on my Twitter feed – and I could not look away.

Tuesday was basically one massive news story after another.

First Cooper Cronk rocked us all with the announcement he would leave Melbourne at the end of this year and move to Sydney. Hotlines were blinging all across the city. The Queensland and Australia halfback's availability on the Sydney market has set off a chain reaction that is going to play out for the next few months and its impact we can't even fully comprehend yet.

Then the Panthers dropped their captain and two other big-name players to reserve grade for breaching team protocol.

Then on Wednesday the Wests Tigers made their first big move on the (unfairly nick-named) "big four". Luke Brooks re-signed and the club's decision to prioritise the retention of James Tedesco and Aaron Woods meant Mitchell Moses's offer was taken off the table prompting him to request an early release to join the Eels.

By this point I was in a front row seat, transfixed and shovelling popcorn into my mouth with no intention of having a league-free day.

By this point I was in a front row seat, transfixed and shovelling popcorn into my mouth with no intention of having a league-free day.

Jason Taylor went on League Life that night and said he was a scapegoat for the Wests Tigers in the contract situation with the players and that he found out via the internet that he had lost his job.

That quickly sapped my enjoyment in lapping up the big league news day. Because there sat a father, husband – a human being – saying he wasn't given the respect of even a phone call to warn him his life was about to change dramatically.

This has been happening in the magazine industry too often lately, where a report will surface that a publication is shutting down and the employees read about it from a news bulletin at their desk. It's terrifying and heartless that people would be thought of as one dimensional blobs.

And then I realised that's how I was looking at the contract situations in the NRL. And I was enjoying it.

For a while there, we had one of Taylor's quotes hanging in the Big League office. It was from an interview I did with him in 2015, and I can't remember the exact wording of it now, but it was along the lines of how rugby league can be so fulfilling and so heartbreaking at the same time.

It's true. We become disillusioned with the game sometimes, but only ever briefly. We are excited or upset and then we move on.

As these next few months of mayhem play out, let's try to remember to keep perspective. The drama is part of the reason we tune in every week, but it's a harsh reality for those involved.

It's authentic. Not like the trash I consume on MTV.

The Round 6 issue of Big League featuring stories on Billy Slater, Manly hooker Apisai Koroisau, the rep rewards headed the way of a host of Panthers and the rugby league records that won't be broken is on sale now at newsagents, supermarkets, at the ground and via www.magsonline.com.au/big-league 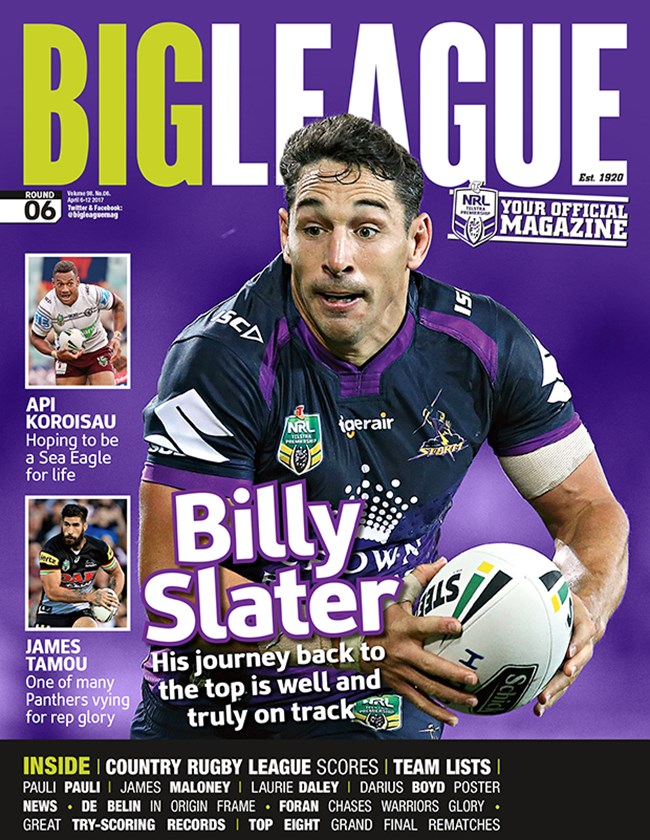