Not since 'Hiddleswift' sent the GC into a tailspin last July has a celebrity couple generated as much buzz as the arrival of 'Leipana' this Saturday night at Cbus Super Stadium.

While the union of Tom Hiddleston and Taylor Swift may have been brief the partnership that has developed between Raiders pair Joey Leilua and Jordan Rapana appears to only be getting stronger each week they are together.

If we thought that the honeymoon period of their first full season together last year that yielded 34 tries and 40 line breaks between them was too exhilarating to be sustainable 'Leipana' have shown already this season that the flame still burns strongly.

In five games in 2017 they boast seven tries and seven line breaks between them and as a pair turned last week's arm wrestle with the Eels into a standing eight count by half-time.

They will be even more eager to make it a night to remember as Leilua makes his 150th appearance in the NRL against a team that he has enjoyed success over six times in 11 previous meetings and Rapana returns to the club where he made his NRL debut way back in 2008.

But the Titans have a power couple of their own in Ashley Taylor and Kane Elgey; aka 'Kashley'.

Just five games into their union in the Gold Coast halves Elgey and Taylor combined superbly in the first half against the Warriors to put on some scintillating tries before a horror injury toll and complete lack of possession in the second half saw them squander a 10-point lead with less than two minutes to play.

Once again the Titans' preparation has been disrupted by injury with Tyrone Roberts in severe doubt with a knee injury and back-rower Joe Greenwood to be monitored after suffering a number of concussions in the opening weeks of the season.

The home side does welcome back Anthony Don and Konrad Hurrell into the backline and could be in line to hand a club debut to Paterika Vaivai should Greenwood be rested.

There are no such concerns for the Raiders who have Elliott Whitehead back on deck after a one-week suspension with former Titan Dave Taylor likely to be the man to miss out from the side that defeated the Eels last weekend.

‌Why Titans can win: Down on troops, down on confidence and down near the foot of the Telstra Premiership ladder, the Titans simply have to find a way to secure the two points with whatever 17 they can put on the park. Konrad Hurrell's return from an ankle injury is a boost out wide and no team has scored more tries than Gold Coast thus far in 2017. Scoring points isn't a problem but they will need to starve Canberra of possession for lengthy periods to prevent the visitors from scoring more. The stats show that the Titans (78.36 per cent) have the second-best completion rate through five rounds while the Raiders (71.91 per cent) have the worst. That trend needs to continue.

Why Raiders can win: The Titans have struggled to contain teams through the middle thus far in 2017 and with some of the most powerful runners of the football in their side that is an area the Raiders can exploit. Second behind the Dragons for tackle busts with 176 from five games, the Raiders attack in waves, first through big boppers in Shannon Boyd (two tackle busts), Junior Paulo (10) and Josh Papalii (10) before shifting to the likes of Joey Leilua (20), Jordan Rapana (32) and Jack Wighton (14) out wide. If the Raiders can put the Titans defence on the back foot, the points will flow shortly thereafter.

‌
The history: Played 19; Titans 11; Raiders 8. It took five visits to Robina before the Raiders registered their first win at the venue in Round 2, 2012 and they have since gone on to win three of their past five meetings with the Titans at what is now Cbus Super Stadium. The second-biggest win in the Titans 10-year history came against the Raiders at Robina, a blistering 30-point first half setting up a 36-0 flogging in Round 2, 2013. Ryan James is the only Titan playing this weekend who played that day although current Raiders Aidan Sezer and Dave Taylor were both Gold Coasters at the time, Sezer kicking six goals from seven attempts.

What are the odds: By far the most one-sided betting game of the round with Canberra receiving 98 per cent of the support from Sportsbet punters. Canberra 13-plus is holding more money than every other margin option combined so punters expect Canberra to run away with this one. Latest odds at Sportsbet.com.au.

NRL.com predicts: In order to save their season from falling into a deep abyss the Titans need to somehow find a way to win but everything points to the opposite result. They have only one win from their past six games at home, their spine has had more adjustments than Tiger Woods and Canberra look like a team with major aspirations in 2017. Footy can be a funny game but this looks all the world like a Raiders victory. Canberra by eight points. 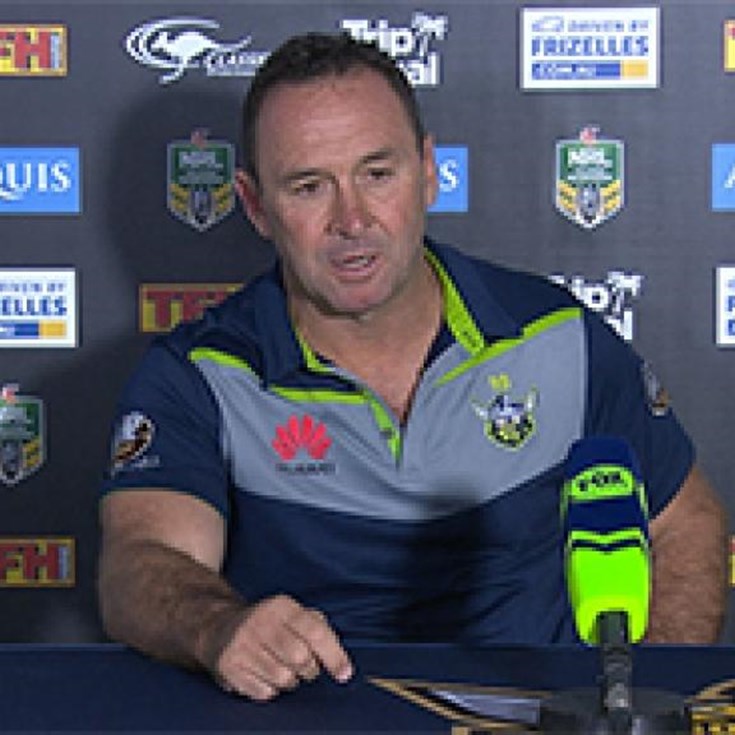