A second-half surge has seen the injury-riddled Bulldogs run over the top of the Newcastle Knights 22-12 in a gripping Friday evening clash at McDonald Jones Stadium.

Lock David Klemmer (ankle) and fullback Brad Abbey (concussion) played no part in the second half as their teammates recovered from a 6-0 deficit to clinch their second win on the trot after a difficult start to the season.

Matt Frawley continued his dream start as a first-grader with a try and an assist in the second half to strengthen claims that he should be the Bulldogs' No.7 going forward.

‌It was a tough loss for Newcastle given they had totally dominated the match with a 6-0 cushion approaching the half-time break.

The Knights should have extended their lead in the 40th minute but Brock Lamb inexplicably threw a dummy with a teammate unmarked on his outside, and it would prove to be costly as the Bulldogs went the length of the field from the following set to score through Brenko Lee as the half-time siren sounded in the background.

It would prove to be the turning point as the Bulldogs scored again from the opening set of the second half with fill-in halfback Frawley going through the line to score the first try of his career.

There was no stopping the visitors who moved further in front in the 50th minute when Marcelo Montoya finished off a quick shift to the right edge after Moses Mbye had made huge inroads on the previous play.

The Knights looked like they had pegged one back through Dane Gagai but his effort was ruled out after Sione Mata'utia had impeded the defence by making contact that was deemed illegal.

There was no doubt over Canterbury's next effort as Frawley produced a magical cut-out ball to hit Josh Morris on the chest to send the centre-come-winger over for a crucial try.

Gagai pegged one back for the hosts 11 minutes from full-time with a scintillating effort that started on halfway and finished with him fending away from the Morris twins to score in the corner and it looked as if the Knights had locked things up, only for Sione Mata'utia to lose the ball as he attempted to ground a grubber.

The Knights continued to push for the match-leveller but Montoya crossed in the final minute to seal the win and send his side temporarily into the top eight.

Earlier, Newcastle allowed the kick-off to bounce but the Bulldogs couldn't punish them with Brad Abbey losing the ball in great field position.

The Bulldogs fullback was then spared more blushes when he allowed Nathan Ross to win the race to a grubber, only for the Knights winger to bounce it in the process of scoring.

Canterbury's decision to turn down a couple of easy shots at goal came back to haunt them as the Knights marched downfield and were awarded a gift two points which skipper Trent Hodkinson comfortably knocked over in the 13th minute.

Newcastle's fans have turned up week in week out no matter the result, and their diehard supporters were repaid in the 20th minute with a freakish finish from Ross who leapt high to reel in a Hodkinson kick, and despite being tackled mid-air, managed to maintain his composure to somehow plant the ball in the corner.

Canterbury's night worsened when Abbey was forced from the field with an HIA which saw Brett Morris move to the back, his brother to the wing, Moses Mbye to centre and Matt Frawley to halfback, but instead of wreaking havoc, the changes seemed to spark them. 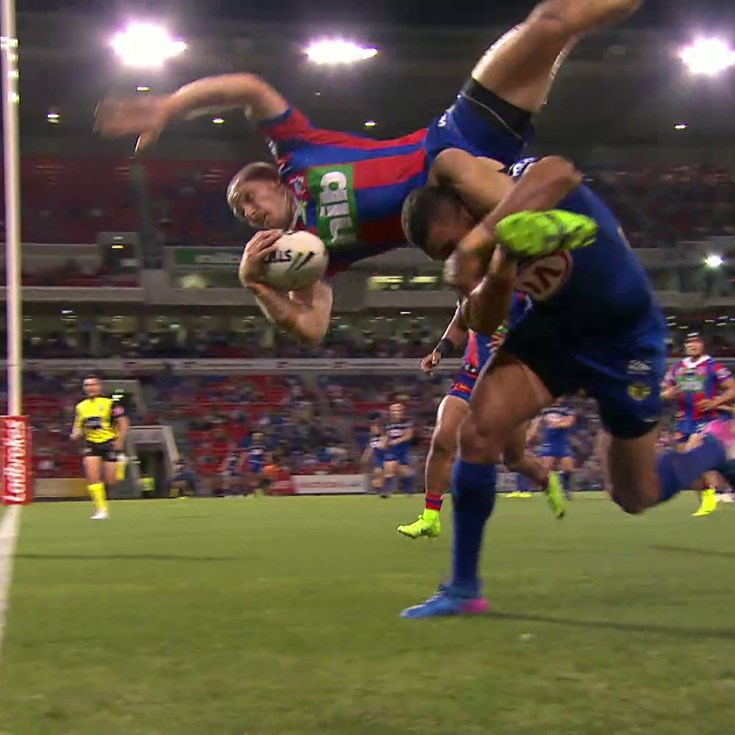