Both the Manly Sea Eagles and Melbourne Storm suffered losses last round to break their winning streaks and will be determined to return to their winning ways in a modern-day Telstra Premiership rivalry on Saturday.

The Cronulla Sharks ended the Storm's perfect start to the season, while the Sea Eagles' three successive wins were snapped in a 35-10 blitz by the firing St George Illawarra Dragons.

Manly are determined to prove their successful form wasn't a flash in the pan but while they enjoy home-ground advantage, they currently hold a 1-3 record at Lottoland.

Melbourne travel to Sydney for the third time this season after happy trips against the Canterbury Bulldogs (Round 1) and Wests Tigers (Round 4).

Jesse Bromwich and Cameron Munster are named in the Storm's extended squad with centre Cheyse Blair in doubt, while Will Chambers will miss this week's clash, serving suspension.

For the Sea Eagles, forwards Nate Myles and Martin Taupua are out, but winger Akulia Uate returns at the expense of Matthew Wright.

Why Storm can win: The Storm are 5-1 and are far from a finished product. Despite resilient defensive performances, their efforts have been plagued with constant errors. Their ball control and discipline in attack have been focal points in this week's preparation. Melbourne are already a difficult prospect to face but if their attack is clicking, it is an almost-impossible task. Kiwi-captain Jesse Bromwich and rising star Cameron Munster are outside chances to come into the 17. They will also take confidence in their strong record in Sydney so far this season with two wins from both trips. It will take a mighty effort from Manly to stand up against the powerful Storm forward pack who have consistently laid a strong platform to start 2017.

Why Sea Eagles can win: Despite a troublesome 0-2 start to the season, Manly roared back for three straight victories including an impressive 18-12 win over the previously unbeaten Sydney Roosters. Before last week's 25-point loss to the in-form side of the competition the Dragons, the Sea Eagles were rolling with confidence behind their superstar trio of Daly Cherry-Evans, Jake and Tom Trbojevic. Their strong form has led to calls for representative duties in State of Origin. The home side will also be motivated to improve their record at Lottoland in front of a vocal Easter long weekend crowd against their fierce modern-day rivals.

Key match-up: Daly Cherry-Evans v Cooper Cronk. The two master halfbacks will provide a captivating battle of the minds. Cherry-Evans and Cronk have been central to their sides' early-season success and victory will depend on their leadership this week. Cherry-Evans has been inspirational since a receiving an ambush of criticism following his side's opening losses. The ever-reliable Cronk is still delivering for the Storm this season despite the distraction of his announcement to move to Sydney at the end of the season. Melbourne were on the ropes until Cronk cleverly kicked a brilliant 40/20 to counter the Sharks' momentum last week. It will be a fascinating spectacle between two of the game's sharpest thinkers.

‌The history: Sea Eagles v Storm: Played 30; Sea Eagles 13, Storm 16; Drawn 1. There's no love lost between the hostile modern-day rivals, and their record displays the competitiveness between them. Since a 10-all draw in Round 10, 2013, Manly and Melbourne have split their past six matches with four of the clashes decided by three points or less.

What are the odds: For every bet Sportsbet has taken on Manly, another three have been placed on Melbourne. However, Storm 1-12 is more popular than 13+ so punters are predicting a close encounter, with the Storm to come out on top. Latest odds at Sportsbet.com.au

NRL.com predicts: It's set to be an absorbing contest between two sides keen to build another run of victories. It's a little discomforting Manly are 1-3 at home while Melbourne are unbeaten in their two matches in Sydney this year. The Storm's forward pack is in fine form and hold a sizeable advantage that Manly need to counter. Addressing their need for greater ball control and handling, Craig Bellamy's side will be well-tuned for a focused performance this week. Storm by 10 points. 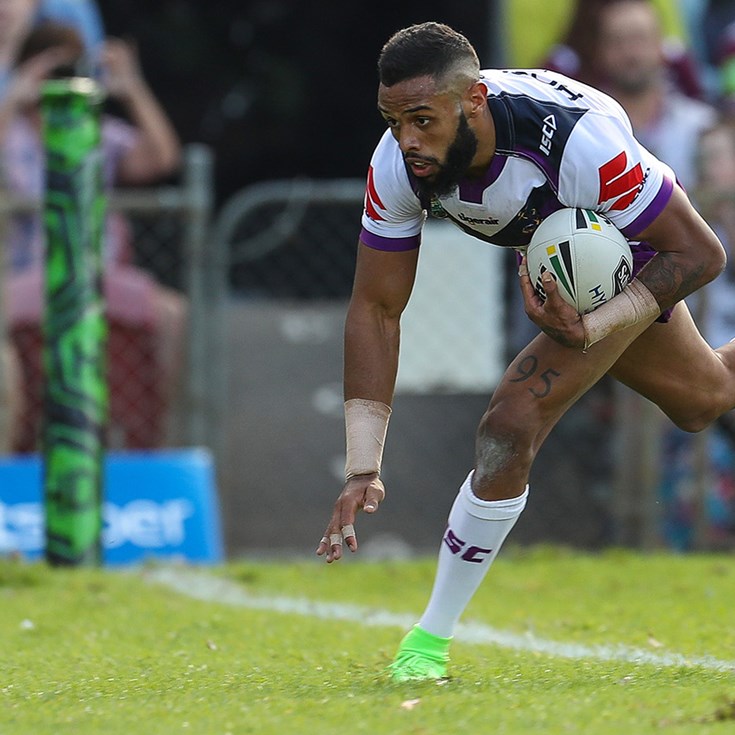 Storm hang on to beat Manly