The Mackay-bred passionate Queenslander was present for the historic occasion, along with Blues centre Corban McGregor in Sydney's west today where NSWRL CEO David Trodden and QRL Managing Director Rob Moore outlined the importance of the women's game and its development to rival other sporting codes in the future.

Kunst has been around the female programs for over a decade and has witnessed first-hand the changes to the game from when she first laced on a boot as a teenager.

"It's wonderful to see Harvey Norman, after coming on board as a sponsor two years ago with the Jillaroos, now throw support behind the Queensland and New South Wales pathways. It is another big coup for female participation nationwide," Kunst told the media.

"The more you go out to rugby league games in the juniors, the more you see girls playing the game now.

"Everything is about numbers and unfortunately we're not there yet but with the backing of such a big corporation and now with both states pushing that component I'm sure we're going to see that national women's league not far in the future."

The women's national league Kunst speaks of is still a while away with NRL CEO Todd Greenberg declaring a month ago he wanted to see the women's game develop some depth and create healthy competition in each state through underage competitions before the idea of having a women's side for every team in the NRL Telstra Premiership.

The South East Queensland Division competition is a strong platform and is considered more advanced to the NSWRL systems, headlined by the fact the Queensland women's side went through undefeated in the annual State of Origin fixture for over 17-straight years up until last season.

As a way to target young females, the NSWRL's introduction to nine-a-side games has already seen growth of over 32 per cent in participation, however Kunst admitted to being "old school" and preferred to see the same rules apply in all competitions.

"Each state is probably doing it a little bit differently and speaking from what I know [living in Queensland] we've always had a sustainable competition with more growth now in regional towns," Kunst said.

"Queensland is very big on the 13-man component in a side and I'm very much a big advocate for that, but I think what New South Wales is doing with the exposure of the game [by playing shorter formats] is wonderful as well.

"Everyone has different ideas on how to grow the game but if we can just get to that one point where we've got more girls playing then that's only going to help our game in general." 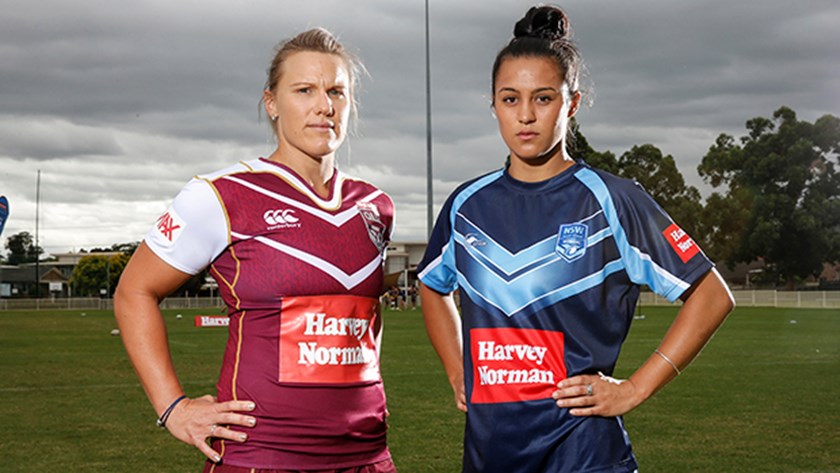 Kunst hopes the financial side of the sport would increase on the back of the growth in the code and that rugby league could one day become semi-professional for females to make a career out of.

"All the girls still work full-time so while we've come a long way, there is still room for improvement in every aspect of football and life," she said.

"I've been a part of the Queensland system and Jillaroos since 2007 and I was just saying my first trips were self- funded, so to see where the game has evolved in the last 10 years is amazing.

"At the end of the day, girls are getting the opportunity week in and week out… that's the main thing and it now gives hope to those who want to pursue a career."

Queensland and New South Wales will clash at WIN Stadium in Wollongong on July 23 after the Blues finally broke their Origin drought, with Kunst admitting to still feeling the effects of going down to the Blues for the first time in her career.

"To be part of that winning streak for so long and then lose last year was just a very big kick in the stomach so we're really primed to get our trophy back," Kunst said.

"I think we were all drowning in self-pity, it took a long time to get over that [loss] but again it just shows the way the game has grown.

"If I'm putting my development cap on with New South Wales winning last year, while I'm a staunch Queenslander, I guess it's a credit to how the female component of the game has grown within the two states.

"With what New South Wales are doing in their pathways, it's going to be a cracker of a game."

Every Ken Maumalo try from season 2022