A last-minute try to centre James Roberts has secured the Brisbane Broncos a thrilling 24-22 win over their little brother the Gold Coast Titans at Suncorp Stadium.

‌Roberts may have scored the try, but Matt Gillett's act of desperation ultimately gifted the speedster with his third try of the night.

Gillett rushed out of the line to charge down a Kane Elgey kick in the 78th minute, recovering the ball and giving off to the quickest man on the park.

It was a heartbreaking way to finish for the Titans who looked for all money like they were going to record their first victory at Lang Park since 2007.

But it wasn't to be, and Neil Henry's men now find themselves at the foot of the table with just one win.

Gold Coast had every chance to get the two points after an excellent first half gave them a 16-10 lead at the break.

Things continued in their favour, with the Broncos starting the second half a man down. Bench forward Tevita Pangai Jnr was ruled out for the match with a broken thumb and a medial ligament issue.

The first 15 minutes of the second half were an arm-wrestle and it looked like whoever cracked first would be giving up more than just four points.

And it took a piece of Kodi Nikorima magic to break the deadlock, with his impressive footwork bamboozling Gold Coast's defence as he crossed the line to score next to the posts. Jordan Kahu's conversion levelled the scores up at 16-all with 20 minutes to play.

The Titans then paid the ultimate price for an Ash Taylor knock on deep in Brisbane territory. A juggle form the young halfback was intercepted by Anthony Milford who put his foot down. After making a clean break, Milford passed to Roberts who then returned the favour, putting the star five-eighth over the line for four points. Kahu failed with the conversion from the sideline to keep the score at 20-16 in the 65th minute.

Gold Coast were hanging on by a thread but Brisbane couldn't take full advantage, with Roberts failing to latch onto a Nikorima grubber – knocking on in the process.

The mistake gave away a seven-tackle set and Gold Coast took full advantage, marching down the field. Taylor then produced a superb grubber and Elgey did what Roberts couldn't do, scoring one of the most important tries of his career. Taylor then showed maturity beyond his years, converting to give his side a 22-20 lead with nine minutes to play.

The Broncos missed another opportunity minutes later and it looked as if it wouldn't be their night. Centre Tautau Moga had a chance to give his side the lead but knocked on in the in-goal.

Enter Roberts – securing the win with a miracle try that was fitting of Good Friday.

Earlier, a fast-starting Titans outfit ran out onto Lang Park ready to play, out-enthusing Brisbane in the early stages of the local derby.

This high tempo start resulted in the Titans opening the scoring with a spectacular 90m try in the 10th minute. Fullback Tyrone Roberts fielded a kick on his own 10m line and chose to run across field, baiting the Broncos' defence before drawing them in for the tackle. A flick pass followed, finding Anthony Don who had 80 metres of free space in front of him. Don put his foot down and crossed next to the posts untouched. Taylor made no mistake with the conversion, making it 6-0 to silence the Suncorp Stadium crowd.

Gold Coast doubled their score in the 14th minute, with co-captain Ryan James crossing next to the right post. Taylor converted the easiest of shots to make it 12-0.

The Broncos came within millimetres of hitting back after five-eighth Milford broke the Titans' line and offloaded to Alex Glenn. Glenn juggled the pass and then knocked on over the try-line to botch a certain four-pointer.

But Brisbane didn't have to wait much longer to score their first, with fullback Darius Boyd throwing a beautiful pass to Roberts for the centre to score. Kahu failed with the conversion, leaving the score at 12-4 in the Titans' favour after 22 minutes.

Ex-Titan Roberts then again reminded his former team of what they're missing, scoring off a scrum set play in the 31st minute. Kahu converted from near the right touchline to cut the margin to two.

But Gold Coast seized back momentum just minutes from half-time, with Don producing an amazing kick for Grevsmuhl to score. Taylor missed the kick from near the sideline to keep the scoreline at 16-10 heading into the break. 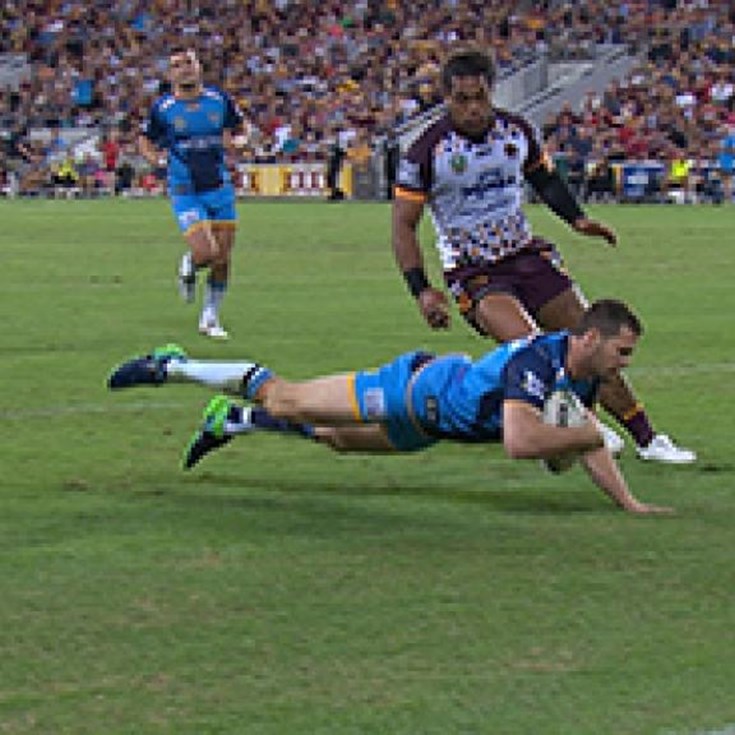