The St George Illawarra Dragons have held off a fast-finishing North Queensland Cowboys side to win 28-22 at WIN Stadium in Wollongong on Saturday night.

‌In a game of two halves, it was a ruthless showing from Paul McGregor's men in the opening 40 minutes with the red V running in five tries to one to lead 28-4 at the break, before the Cowboys stormed home to score three-unanswered tries and go close to causing what would have been the comeback of the season.

With Johnathan Thurston missing from the North Queensland line-up, utility forward John Asiata slotted into the halfback position and proved more than useful to help bring the visitors back into the contest in the final quarter of the game.

Dragons forward Jack de Belin was outstanding for the home side with the lock forward providing two offloads in the middle of the park that led to Nene MacDonald and Gareth Widdop crossing in the opening half.

Fresh after four try assists last week against the Sea Eagles, halfback Josh McCrone found MacDonald out wide with the former Titan showing acrobatic skill to plant the ball down in the right hand corner.

An error off the restart from McCrone enabled the Cowboys to hit back through Gideon Gela-Mosby, with the young rookie strolling over on the left-edge from a Blake Leary grubber close to the line.

The Dragons had a chance to strike back when Jason Taumalolo coughed the ball up, however a Tim Lafai pass was intercepted shortly after with Feldt racing 80 metres downfield before being caught by McCrone in a try-saving effort.

Michael Morgan kicked the ball out on the full to allow the Dragons to take the lead once more after points.

A solid hit from Justin O'Neill was outsmarted by hooker Cameron McInnes, who went down the blindside on the left-edge to find Widdop and the Dragons skipper put Tim Lafai into a yawning gap for the red V's second.

Both Kyle Feldt and Justin O'Neill were caught short again five minutes later when Lafai got on the outside of the Queensland centre before providing a perfect flick pass for Kurt Mann to fly down the sideline and cross in the corner.

Russell Packer left the field early in the game for a HIA assessment, but returned to link with de Belin and set up Widdop's four-pointer.

Packer broke through up the middle of the field before finding Widdop in support for the Dragons' fifth of the night before the half-time siren.

Paul Green's side needed to be first to strike in the second half and Morgan got the visitors back into the contest with a deft grubber kick for interchange forward Ben Spina to win the race to the ball in-goal and narrow the Dragons' lead to 18.

A line-break and 60-metre charge from Cowboys fullback Kalyn Ponga after points handed the visitors more field position before Morgan ran into a huge hole off a Asiata pass to reduce the deficit to two converted tries with 18 minutes remaining.

Filling in for Thurston in the halfback spot, Asiata would provide the Cowboys' next four-pointer when he delivered a mid-field bomb that was spilled by Macdonald to land in the hands of prop-forward Scott Bolton to charge over the line.

Dragons fans would have felt nervous when Ponga broke through after points, however a poor choice of kick let the home side off the hook. The Cowboys fullback was among the visitors' best in a beaten side, finishing the game with 186 metres.

Tyson Frizell brushed off an arm injury late in the game to remain on the field as the Cowboys continued to surge, before a try-saving effort from Macdonald and an error from Gideon-Mosby with a minute remaining would put the game to bed and deliver the Dragons their sixth victory of the season. 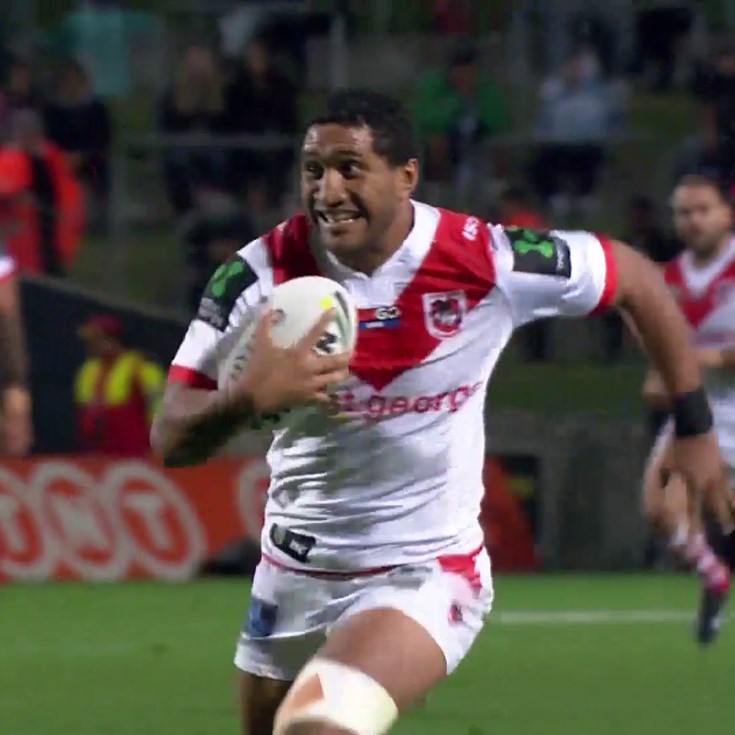 Who said wingers should never meet?