A simple positional switch for Jamal Idris brought out the former Australian international's best performance for the Wests Tigers after four games in the black and gold.

While Ivan Cleary kept things simple in his first stint as coach against the Cowboys, moving Idris to the right side to partner in-form winger David Nofoaluma provided a right-side attack that had been lacking in recent weeks.

‌It has been a disruptive start to the season for Idris, who missed a game due to a foot injury before being played off the bench by former coach Jason Taylor in the opening two rounds of the Telstra Premiership and a stint in the Intrust Super Premiership.

“I played close to 100 games on the right side and that's where I played all my time at the Bulldogs and I got that left fend so I could finally put it to use," Idris said.

"You're always going to be a little happier when you get a win so hopefully we can roll from that and start building on that this week."

The 26-year-old faces his biggest challenge since returning to the game for the clash on Easter Monday, facing an Eels left-side edge of Michael Jennings and Semi Radradra.

Both Jennings and Radradra have been kept quiet in the last month with limited opportunity, however the pair have 13 tries from 17 combined in appearances against the joint venture.

Meanwhile, Nofoaluma confirmed he was in negotiations with the Wests Tigers to extend his career beyond 2017 after six rounds of arguably the best football of his NRL career to date.

‌
The 23-year-old is ranked first in offloads (21) and third in tackle breaks (47) behind teammate James Tedesco (53) and Kiwi international Jordan Rapana (51) at Canberra while also averaging over 170 metres per game.

"My manager and I are in talks with the club and they're coming close to signing a deal, nothing has been sealed yet but I'm sure they'll sort it out," Nofoaluma said.

"Obviously coming off contract my job is to play my best footy for the club and I represent the Tigers for now and my manager looks after that side of things.

"I'm just really loving the game at the moment and enjoying it week in week out, putting in the extra efforts.

"I'm there to put my best performance in for the team and that's my thinking, whatever is going on behind closed doors I just block that out and focus on myself."

Nofoaluma's final decision on where he plays next year will not be impacted by the choices of Tedesco and Aaron Woods.

"There's certain circumstances that come along and players make decisions and sometimes it's the best thing for them," he said.

"For myself personally I wouldn't like to see them leave but I've got a role here myself at the club and I'm here to perform than worry about others and what they do… the decision they make is based on themselves."

For now though, a one-on-one battle with Radradra awaits for the in-form flyer with the Eels desperate to snap a four-game losing streak in their second home game of the season at ANZ Stadium. 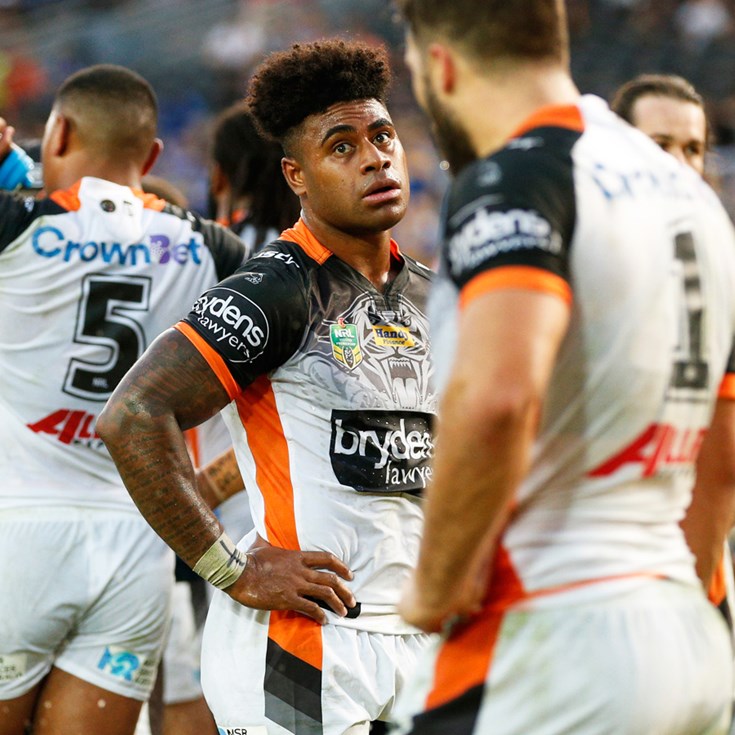