The Canberra Raiders scored 14 unanswered points in the second half to beat the Warriors 20-8 on Saturday night. Here are the five key points from the Round 7 NRL Telstra Premiership clash at GIO Stadium.

With three minutes to go in the first half the Warriors had all but scored their second try of the match when Roger Tuivasa-Sheck darted towards the line without a defender in front of him.

But a miraculous tackle from Jarrod Croker saw the Canberra captain hold 'RTS' up over the line, with the ball eventually coming loose for the Raiders to regather.

At that point in the game, with the Warriors already sitting on a two-point lead, leaking another try could have proved a heavy blow for the Raiders.

Post-match coach Ricky Stuart singled the tackle out as the play of the game.

"Jarrod's try-saver was the turning point of the game," Stuart said.

"It was an amazing effort."

Other half of 'Leipana' has his day in the sun

After helping his right-edge partner, Jordan Rapana, to a hat-trick last Saturday night, Joseph Leilua enjoyed a big night at the office himself in Round 7.

Leilua scored a double, with tries 20 minutes either side of half-time, and ran for 135 metres to terrorise the Warriors' left defence.

The 25-year-old centre finished the match with a provisional 66 NRL Fantasy points.

‌Warriors awful in second half

Coach Stephen Kearney must be left scratching his head as to what happened to his side in the second 40 minutes in Canberra, after they fumbled their way to leaking 14 unanswered points.

After making just four errors in the first stanza the Warriors coughed up 13 in the second, two of which led directly to Canberra tries.

As a result the visitors also ended up having to make 61 tackles more than their opponents, after owning the majority of the possession through the opening exchanges.

"I thought we gave ourselves a good chance in that first half… I thought we let ourselves down in the second half," Warriors centre David Fusitu'a said post-match.

A win built off defence for Green Machine

Canberra enjoyed little of the Steeden in the first 40 minutes, but survived to trail just 8-6 at the break.

When the possession count eventually evened up in the second period the Raiders took full advantage, and were able to mount enough scoreboard pressure on the Warriors that the Kiwi outfit started to cough up unforced errors.

At one stage inside the opening 20 minutes Canberra repelled four-consecutive sets camped against their own line, while they saved a certain four-pointer just before the break thanks to Croker's intervention.

"I thought our first half performance was wonderful. We had to play really tough and defended well," Stuart said.

Warriors had their chances, execution poor

The Warriors should have led by more than two points at the break, having bossed possession and attacking chances, but lacked polish when it really counted close to the line.

An inability to convert off repeat sets, coupled with a pair of blown tries just before the break, saw the Warriors only manage to clock eight points across the 80 minutes at GIO Stadium.

That was always unlikely to be enough to down the prolific Raiders, who heading into the match had scored more tries than any other team in the competition, and in the second half the difference in execution showed.

Saturday night's match was the fourth time in seven games this season that the Warriors have been held to 12 points or less. 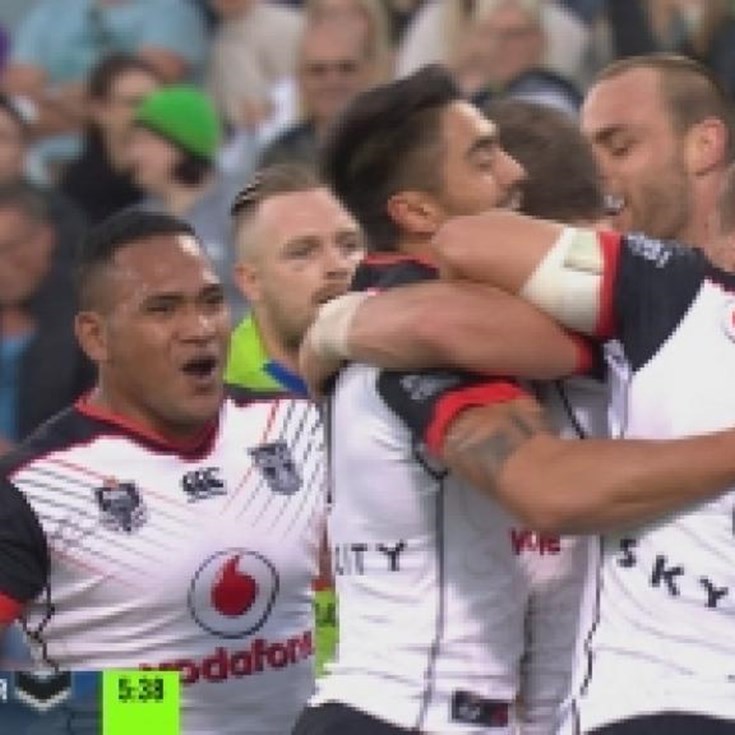 The ultimatum that made Boyd a world-beater