It's been three decades since these two sides met in the 1987 grand final, so what better time for the Raiders and Sea Eagles to lock horns eight weeks into the Telstra Premiership and commemorate Anzac Round.

Canberra is coming off a hard-fought 12-point victory against the Warriors, while Manly fell short against Melbourne despite a late comeback at Lottoland.

The Sea Eagles had won five straight clashes at GIO Stadium before the Raiders broke their drought in the corresponding fixture last season with a 30-18 victory, and with the last six games between these clubs averaging 56 points we could be headed for another point-scoring spree on Friday night.

Only nine Manly players from last year's game remain in Trent Barrett's 17 that will travel to the nation's capital for Friday night's clash with Marty Taupau named to return in the front row after missing last week's game against the Storm. The 27-year-old will replace Lloyd Perrett in the line-up after the former Bulldog picked up a sternum injury.

Raiders coach Ricky Stuart has named an unchanged side for the fixture but it's unlikely the coach will only stick with 15 for the game this week after both Adam Clydsdale and Dunamis Lui failed to take the field against the Warriors in a true showing of the Canberra players' fitness.

It was the first time since Round 24, 2009 that a coach has only played 15 players on the field according to stats guru David Middleton, after former Broncos coach Ivan Henjak only used Lagi Setu and Ashton Sims off the bench against the Dragons. Raiders prop Dave Taylor would be all too familiar with that match after starting up front for the Broncos in the No.10 jersey, scoring a try in the 12-2 victory.

‌Why the Raiders can win: One word: Leipana. Who need halves when you've got both Joey Leilua and Jordan Rapana operating out wide? The Sea Eagles struggled on the left edge against Melbourne with five tries down Jorge Taufua and Brian Kelly's channel, and Manly have also conceded all but two tries on the third, fourth and fifth tackles of their sets – times when the Raiders traditionally enjoy scoring points with 23 four-pointers after seven rounds. Both Leilua and Rapana have linked well in the last fortnight and scored five tries between them last time the two sides met at Lottoland in 2016.

Why the Sea Eagles can win: Manly lead the competition for most line breaks (34) in a clear sign they're splitting the opposition and creating opportunities. The visitors are also level with the Rabbitohs for the fewest errors in the NRL (9.7 per game) and are level with the Raiders on 24 try assists – the second best in the Telstra Premiership. Both skipper Daly Cherry-Evans (seven try assists) and fullback Tom Trbojevic (eight line breaks) are the key to the side's chances of victory.

‌
The history: Played 51; Raiders 20; Sea Eagles 30; Drawn 1. Canberra is a home away from home for the Sea Eagles with the four-hour road trip proving a friendly one in recent years, with Barrett's side winning five of their last six in the nation's capital. The Raiders however enjoy playing home games on Friday night, winning four of their last five at GIO Stadium – including last year's 12-point win over Manly.

What are the odds: Sportsbet punters are keen on the Raiders to run away with it by 13+ against Manly, and in the head-to-head market there is three times the amount of dollars on Canberra. Jordan Rapana is always the best-backed for first try scorer and this week is no exception, although Jarrod Croker has had his share of support. Latest odds at sportsbet.com.au.

NRL.com predicts: Despite their strong record in Canberra, the Sea Eagles will have their hands full against a Raiders side starting to hit form. If Manly can stay with the Green Machine early, their second-half effort against Melbourne should have them confident of causing an upset. But based on last week's results and the Raiders side on paper, it’s hard to see anything but a Canberra victory at home with confidence sky-high after three straight wins. Raiders by 13+. 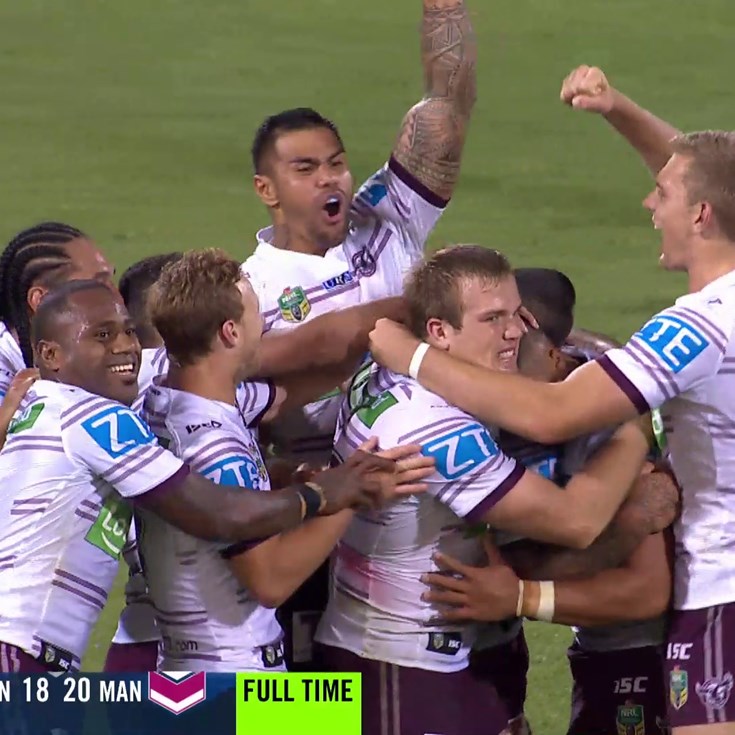