The traditional Anzac Day clash between the Roosters and Dragons has been one of the most significant events on the rugby league calendar regardless of where they are on the ladder, and for the first time in quite a while, both sides are flying high in the top four which is sure to add extra spice to this Round 8 showdown.

In what shapes as the undisputed match of the round, the Red V find themselves on top of the ladder courtesy of five-straight wins, including a last-start 28-22 triumph over an undermanned North Queensland side.

The Roosters are just one win behind them in fourth spot after they took down the Knights 24-6, although the scoreline probably didn't reflect the quality of the contest.

Both sides have players in red-hot form who will be keen to impress selectors ahead of the mid-season Test in May, while there will be plenty of intrigue surrounding a host of back-rowers who are in contention for a State of Origin jersey.

Roosters co-captain Jake Friend returns to the starting side with Paul Carter dropping to the bench where he is joined by Kane Evans who replaces the injured Ryan Matterson (ankle). Joseph Manu has been retained although Latrell Mitchell is on the extended bench along with firebrand front-rower Dylan Napa.

It's fairly smooth sailing for the Dragons who welcome back Josh Dugan in the No.1 jersey, shifting Jason Nightingale to the wing and Kurt Mann to the bench.

‌Why the Roosters can win: A lot has been made about his halves partner, but Mitchell Pearce has developed into the real deal in 2017. He has taken his game to new heights this season, with the often-maligned No.7 adding new strings to his bow a decade after making his NRL debut. He was involved in most of the key plays last week, throwing a wonderful pass to set up Michael Gordon, taking the line on himself for the match-sealing try while he also gained 485 metres with the boot.

Why the Dragons can win: Plenty has been made about the Dragons' hot start to the year, but what has been lost in the hype is who they have beaten so far in 2017. The Red V have taken down the 2016 premiers (Sharks), the 2015 champions (Cowboys) and 2011 competition winners (Sea Eagles) in the first seven rounds. They'll be keen to add the 2013 premiers to that list, and they are playing a brand of footy that should trouble Trent Robinson's men. The Roosters looked vulnerable in Round 6 when the Broncos attacked them through second-phase offloads, with Tevita Pangai Jr (four offloads) and David Mead and Anthony Milford (three each) asking plenty of questions of the retreating defence. In that same round, the Dragons terrorised the Sea Eagles with first-half offloads, with Paul Vaughan and Tim Lafai the chief destroyers. The Roosters have been comfortable handling structured play this season, but like most teams, they struggle when having to defend back-to-back shifts created by offloads.

‌
The history: Played 36; Roosters 16: Dragons 19; Drawn 1. The Roosters have won seven of the past nine meetings between the sides but the Red V emerged victors in each of the past two Anzac Day clashes. The Dragons survived a second-half surge to hang on for a 20-18 last season but the Tricolours exacted revenge with a 42-6 win in Round 24.

What are the odds: This is by far the biggest betting game of the round and Sportsbet punters are leaning slightly towards the Roosters, but not by much. 53 per cent of money is with the Roosters and 47 per cent on the Dragons so expect this market to tighten right up as we get close to kick off. Latest odds at sportsbet.com.au

NRL.com predicts: It is never easy tipping against the side on top of the competition ladder, but in an era where winning streaks are becoming more difficult to maintain, this shapes as the game that might halt the Dragons' momentum. Roosters by 4.

I want to make up for 2016: Lafai
Robinson backs Cordner for Blues captaincy
Team of the Week: Round 7
Holden Cup Round 8 previews 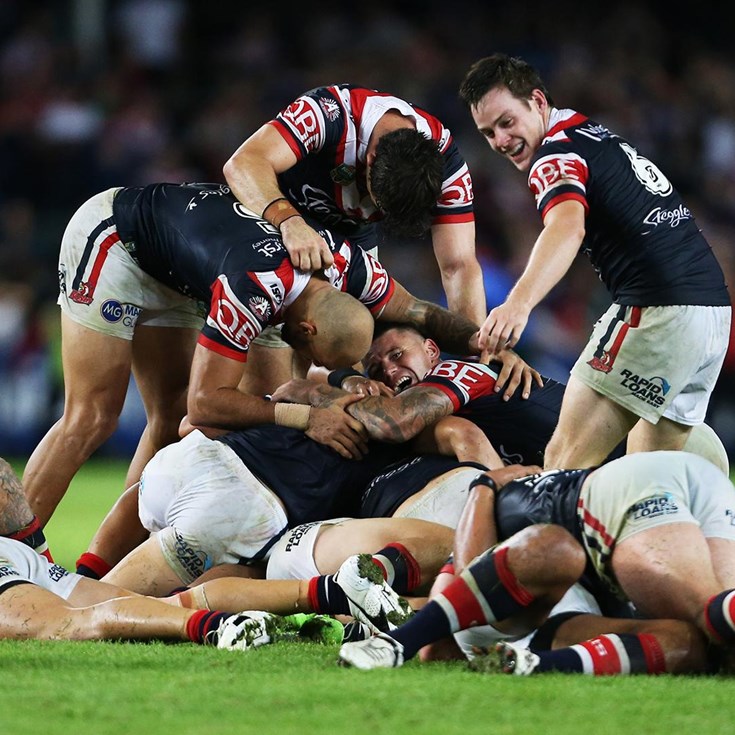