The older I get the more I realise how important family is. In particular, there's something about this time of year. The few days before and after Anzac Day are the best times to spend with your family and friends and appreciate how lucky we are to be here and where we've come from.

Chances are you're like me and you have heritage from all over the world, and if you get the chance to learn about it, I urge you to take it.

A few years ago my dad gave me a book of family history, which had been researched by my aunty and a few of her friends. I flicked through it at the time, but didn't consider anything I read in those pages too deeply. As I said, it's taken a bit of maturity to get some perspective on it all.

At the end of last year I asked to see the book again and this time I wasn't as unaffected. I marvelled at the handwriting of my ancestors, noted the way my nose is eerily similar to my great-grandmother's and was stunned to read telegrams from my great uncle, Walter Thomas Howell. He was in the 15th Australian Infantry Battalion in the Solomon Islands during World War II and was only 20 when he was killed on Bougainville Island, less than two months before the end of the war. He was buried in the Port Moresby War Cemetery and one day I hope to visit.

You might be wondering why I'm talking about family in a column about rugby league - and it's a fair point. It's my belief that the way the NRL has embraced Anzac Day commemorations over the past few years has inspired more people like me to look into their history and the realities of our past.

Although there are only two games played on April 25, every game this round will have a special feeling to it. Conversations are opened around our past and present, how lucky we are to celebrate little things like football games and why we owe all of the privileges of our everyday lives to the Anzacs.

Last year I knew nothing of great uncle Wally, but to ensure his sacrifices will not be forgotten by his family is important to me. This year I'll be thinking of him and thousands of other servicemen and women during The Last Post at each game. Who will you be thinking of?

If Jarrod Croker hasn't done enough to earn himself an Australia or New South Wales jersey by now, he never will. The guy has been the highest points scorer in the competition several times (and as recently as last year) and is a respected club captain, which means he's professional and level-headed.

The defensive lapses that may have plagued him in the past don't exist anymore. The way he held up Roger Tuivasa-Sheck over the line last weekend against the Warriors proved that. He's a passionate player, a leader in the game and has enough experience behind him that it's no longer fair to wonder if he would struggle in the spotlight.

Fact is, no one who ever debuted at Origin or Test level had previous experience. Croker has earned a chance to prove he can handle it.

The Round 8 issue of Big League is on sale now at newsagents, supermarkets, at the ground and via www.magsonline.com.au/big-league 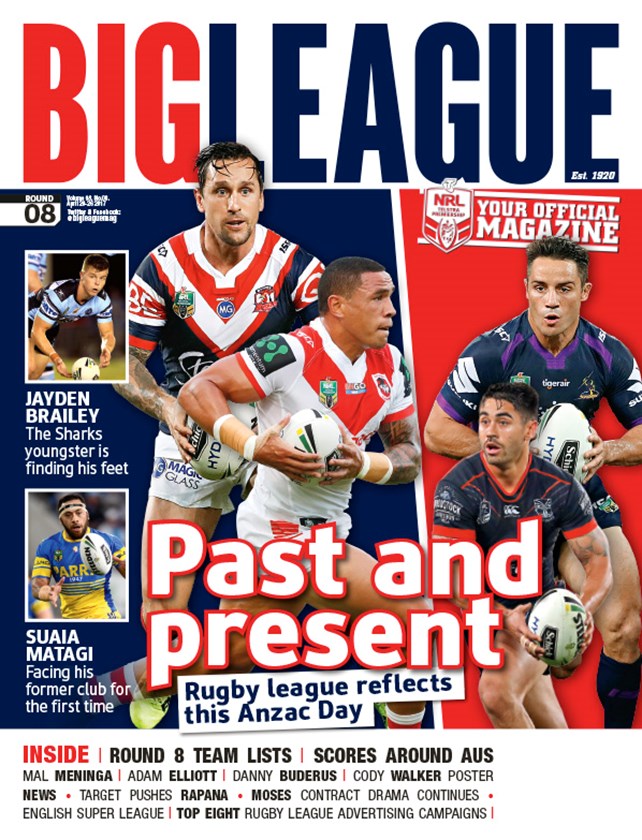