Mollie Gray had represented Australia in rugby union and patrolled the streets of Afghanistan in the Artillery Mobile Training Team but never tried her hand at rugby league until a Facebook ad piqued her interest – and quickly led to a successful trial and a contract with the Cronulla Sharks.

Gray followed in the footsteps of her older brother when enlisting in the Army straight out of high school, and enjoyed her first year so much that she signed up for longer.

"I joined up in an administrative role, I was sent up to Darwin for the first two years and then after that I moved around a bit, ended up in Brisbane for a couple of years," Gray told NRL.com.

"In 2012 I deployed to Afghanistan in a support role for the Artillery Mobile Training Team. I did a lot of support and a little bit of driving as well.

"In January 2013 I got back home after a six month deployment. I decided to shift my career focus into sport because the army is so supportive of sport. They've been really great to me, especially since 2014 when I ended up playing for the Wallaroos at the Rugby World Cup."

Rugby league and the growth of women's sport

Gray earned an Australian Sevens contract for 12 months before going back to the Army. She played a couple of Tests with the Wallaroos in 2016 before seeing an opportunity to try her hand at rugby league.

"I saw the trials for the Sharks advertised on Facebook. I'd heard bits and pieces about a women's NRL potentially kicking off and decided to send the coach an email," Gray said.

"I turned up at the trials, I'd never played rugby league before in my life and it went really, really well. Off the back of that I was offered a contract with the Sharks."

Balancing life in the Army with her sporting commitments and her work with DefenceCare has been challenging for Gray, but she can see benefits on both sides for all the hours she puts in.

"It's tough. I start work at 10am so I get all my gym done in the mornings, in the afternoon I take off to Cronulla twice a week," she said.

"Most of my rugby training is done in the afternoons, then when I need to go away for games or competitions Army are really supportive of letting me go and compete.

"It raises the profile of women in Defence and women in sport."

While she admits it is an exhausting lifestyle, Gray says she is looking at the bigger picture of being a part of the Sharks as women's rugby league grows and evolves.

"Women's sport across the entire country is growing at the moment," Gray said.

"When you look at what the Australian Rugby Sevens has done and the stepping stone it's been for rugby union, what the NRL are doing at the moment with the Women's Nines and showcasing all the games – it is showing women can play rugby league, they are very good at it and if you invest some time and energy into them we can put on a really great show." 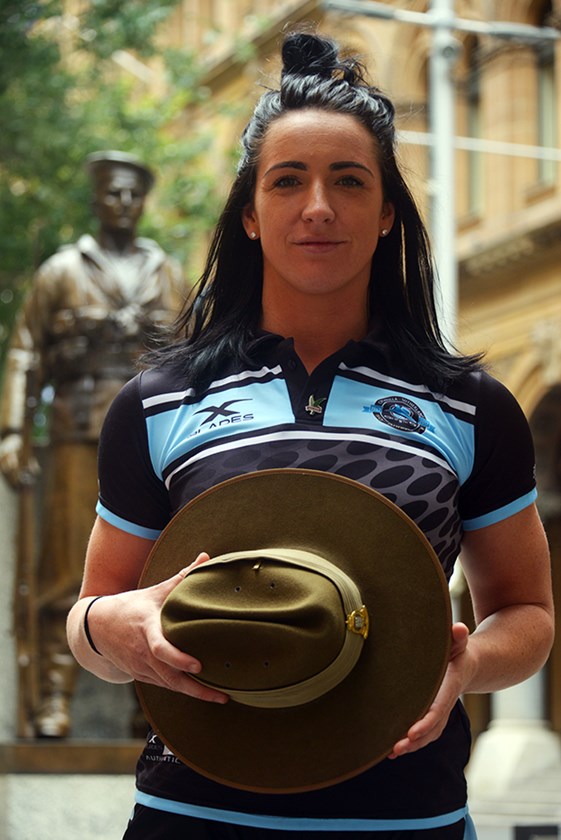 Gray is also keen to develop her work off the field where she represents DefenceCare and the services they provide. There is a big focus on mental health and supporting both ex-serving and current serving members.

"Twenty per cent of the current serving population are affected by mental health issues, whether that be PTSD, depression or anxiety," Gray said.

"We're trying to get the message out there that if you are suffering, recognise the signs, seek help, know it is okay and people can get through it.

"The more awareness we can raise the more educated people are going to be about mental health."

This Anzac weekend will be as busy as usual for Gray - who is currently on the road back from a knee reconstruction - as she again juggles her football and Army commitments.

On Saturday she will commentate a women's match at Southern Cross Group Stadium with Don Rogers, son of Cronulla legend Steve Rogers. The Sharks women's team are playing against Penrith before the NRL game between the Sharks and the Titans on Saturday night.

"On Anzac Day I'll go to a dawn service and give an Anzac Day address," Gray said.

"Then I'll team up with DefenceCare and do some representative duties with them for the morning.

"Then I'll hit the pub and play some two-up."