Wests Tigers have come from behind to defeat the Canterbury Bulldogs 18-12 in a seesawing contest at ANZ Stadium on Sunday.

With scores locked at 12-all in the 76th minute, the Wests Tigers shaped for a field goal before Mitchell Moses and Luke Brooks both threw dummies to get the ball down the left-edge for Kevin Naiqama to go over for the match-winner.

Brooks' grubber kick for Naiqama ricocheted off the leg of Bulldogs forward Josh Jackson and ended up in the Fijian internationals hands to hand Ivan Cleary his second win from three games in charge of the joint venture club.

The game was turned on its head 12 minutes from full-time when Bulldogs centre Brenko Lee was sent to the sin bin for a professional foul on Wests Tigers back-rower Chris Lawrence in the act of going for a four-pointer.

Trailing by two points, the home side levelled the scores with a penalty goal to Moses and stormed home on the back of the extra man on the park.

‌After another distractive week off-field for the joint venture, Cleary's side exploded out of the blocks early in the match with James Tedesco setting up David Nofoaluma with a slick cutout pass for first points of the game in the 10th minute.

Tedesco would soon turn villain when he come up with an error that enabled Bulldogs winger Marcelo Montoya to burrow his way over and level the game shortly after.

The visitors looked dangerous once more until a roaming Sam Kasiano threw a pass that was intercepted by Nofoaluma who raced 80 metres before Josh Morris caught the Samoan international in a try-saving effort.

Matt McIlwrick would earn the Tigers a penalty after some sharp work out of dummy half with Cleary's men opting for the two points from in front, before Moses slotted another penalty goal on the break after Josh Reynolds was caught offside at marker.

Bulldogs prop Aidan Tolman left the field in the 12th minute after a head clash that required stitches but was later cleared to return.

Aaron Woods, a man at the centre of attention for contract drama at Concord, led from the front in a 218-metre display that earnt him the Anzac Medal for best on the field, while Nofoaluma was instrumental on the back of his re-signing announcement earlier in the week with 255 metres from 17 carries.‌

‌Despite trailing by 10-6 at the half-time break, the Bulldogs would light up ANZ Stadium five minutes into the second half when Des Hasler's men threw the ball through nine sets of hands to score a 60-metre special.

Kerrod Holland finished off the team effort reaching out to get the ball down after the NRL Bunker ruled the former Knights junior was entitled to a second movement with Naiqama falling off the tackle close to the line.

Holland's conversion hit the post, but the Bulldogs would soon take the lead after Tim Grant conceded a penalty next to the posts.

Grant left the field in the 65th minute with a left shoulder injury and did not return.

Greg Eastwood turned possession over after points but the Kiwi international put a strong hit on Moses to force the ball loose and relieve pressure for the Belmore outfit.

David Klemmer was strong upon his return from an ankle injury for the Bulldogs, while Brooks showed no ill effects from a hamstring injury and made a successful return for the Tigers.

Eastwood would give the Bulldogs one last chance after a one-on-one strip on Brooks, but the Wests Tigers defence held strong in the final two minutes to turn the Bulldogs away. 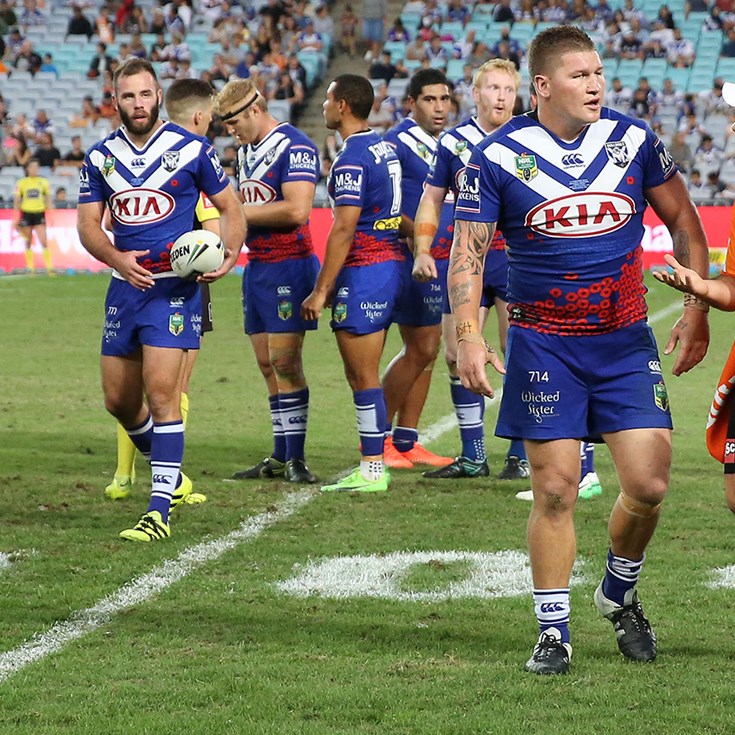