A virtual four-point game beckons for the Dogs and Raiders at ANZ Stadium this Saturday evening.

The seventh-placed Raiders visit the ninth-placed Dogs with both teams on eight competition points (also level with Manly and the Eels) with the winners of this one to consolidate themselves a top-eight spot heading into Rep Round while consigning the losers to a fortnight out of the finals zone.

Adding to the desperation, both these teams were upset last week in a match they were heavily-favoured to win. The Dogs were uninspired against a revved-up Wests Tigers while the Raiders couldn't land a killer blow against a gritty Manly side that refused to go away, eventually stealing a golden-point win in the nation's capital.

Both teams are largely unchanged from their last starts; Will Hopoate has been named in the reserves by coach Des Hasler and could force his way into the starting side while Raiders coach Ricky Stuart gets Clay Priest back from a shoulder injury which pushes Dunamis Lui out of the 17.

‌Why Bulldogs can win: Talismanic five-eighth Josh Reynolds will depart Belmore at the end of the year to link with Wests Tigers on a four-year deal. A hyper-competitive player who this year looks to have harnessed his emotional style to his advantage without diminishing that passion, you can bet Reynolds will be fired up for this one. Reynolds was arguably his team's best player in a hat-trick of wins over Brisbane, Newcastle and Souths before last weekend's loss. If he's in the mood there's every chance he inspires his teammates to a massive performance.

Why Raiders can win: The Green Machine have been alarmingly hot-and-cold so far this season, looking a million bucks at times (just ask the Titans and Tigers) but have still lost four of their eight games. To be fair they probably played better in losses to Brisbane and North Queensland than many teams have in some wins this year but their consistency just isn't there yet. They're always dangerous though – they have three players in the top seven for tackle busts so far this year in Jordan Rapana (58), Nick Cotric (36) and Joey Leilua (34) and despite their playmakers not figuring anywhere near the top of the try-assist tally the team overall has scored the second-most points of any club with 200 at 25 per game.

‌
The history: Played 64; Bulldogs 36; Raiders 28. The last 10 meetings are split five apiece, though the Raiders have won the past two. The Raiders haven't played the Dogs at ANZ since Round 26 of 2011 when they were dismantled by a four-try haul to Ben Barba.

What are the odds: Sportsbet has seen more bets placed on the Raiders, yet more money on the Bulldogs overall. Both sides have been popular to win 13-plus while Jordan Rapana is the best-backed for first try scorer. Latest odds at sportsbet.com.au.

NRL.com predicts: Two of the biggest forward packs in the NRL smashing into each other should make compelling viewing. While the bookies have the Raiders at short odds this is anyone's game and whichever of those aforementioned packs gains the early ascendency will all but decide this one. We'll play it safe and take the Raiders in a tight one but if you need an upset or two in your tipping comp this could be the match to try it. 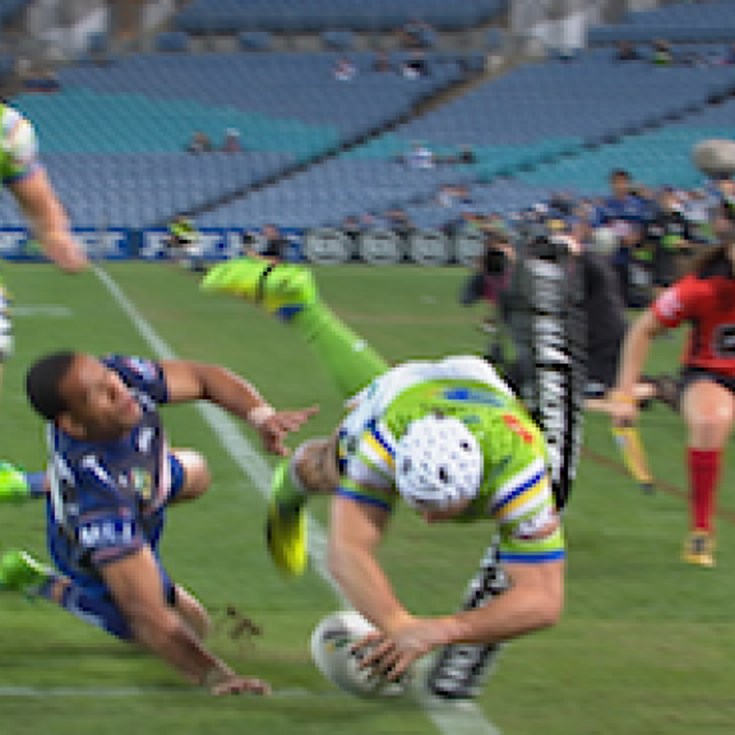 Bulldogs defy injuries to down Raiders