All aboard Ivan Cleary's bus for a Round 9 blockbuster at Leichhardt Oval as the Wests Tigers take on the defending premiers at their spiritual home of '2040'.

With all the player speculation clouding last week's preparations, the joint venture put it all behind them and came out firing to produce a performance against the Bulldogs that left many scratching their heads at where that "roll up your sleeves" attitude has been all along.

Regardless of what is happening off the field, Cleary seems to have the players focused on results and as we all know, that's where it counts. Aaron Woods will face another tough test up front with former Tiger Andrew Fifita coming to town in just one of a number of key match-ups this week. James Tedesco and Valentine Holmes will lock horns at fullback while Matt McIlwrick will come up against young gun Jayden Brailey – a player who ultimately moved McIlwrick on from the Sharks last season.

Last week Cronulla slipped up against the Gold Coast Titans to suffer another loss at home – remarkably their third of the season. As is the case for the Sea Eagles, the Sharks have performed more strongly away from the Shire to start the year,  winning four games from four attempts on the road.

The Sharks don't look too far off in defence, but their discipline and completion rates are substantially down on their premiership-winning form last season – a stat noted by Sharks back-rower Wade Graham earlier in the week.

Cleary has named the same 17 that defeated the Bulldogs, while the Sharks have lost Jason Bukuya (ankle) for an extended period but welcome back Kiwi international Gerard Beale on the wing which moves Kurt Capewell back to the bench.

Luke Lewis also returns to the line-up after missing last week with a hamstring injury.

Sharks veteran Chris Heighington returns to face the side he played 201 games with before departing in 2012 and with his future up in the air beyond this season, could it be the last time we see the premiership-winner at the suburban venue?

Why the Wests Tigers can win: Luke Brooks' return has added the missing element to the Tigers attack and was immediately evident with the addition of his left-foot combination with Mitchell Moses on Sunday. Going into the clash as underdogs will help the Tigers, with the Sharks struggling to put away sides they're expected to beat comfortably like the Knights and more recently the Titans. Cronulla hate travelling to Leichhardt, winning only two games from seven attempts and the Sharks are in the top three for three key discipline areas – most errors (94), penalties conceded (68) and missed tackles (273) – in a clear sign the defending premiers are not as clinical after eight rounds.

Why the Sharks can win: It's an obvious one, their defence. It comes as no secret they're struggling in attack with Valentine Holmes and Jayden Brailey still adjusting to the voids left by Ben Barba and Michael Ennis, but their defence, particularly in the second half of games is making up for lost time with the ball, which is astonishing based on their high missed tackle rate to start the year. The fact is they've only conceded seven tries in total of second halves – less than one four-pointer per game. Only competition leaders Melbourne (four tries) are better in that department and indicates the Tigers are either going to have to strike early and rely on defence or tire the Sharks with the likes of James Tedesco running them around all night.

The history: Played 27; Wests Tigers 17; Sharks 9; Drawn 1. The Wests Tigers hold a dominant record over the Sharks winning 15 of their last 20 games against them, however the premiers have won four of their last six against the Tigers since 2013. Cleary's men will want to fix their recent Leichhardt Oval record up this week after dropping their last two games at the venue.

What are the odds: The money is split almost 50/50 according to Sportsbet so it's easily the tightest game of the round from a betting perspective. Wests Tigers 1-12 is the most popular winning margin and the Tigers have also been well supported at the line. Latest odds at sportsbet.com.au

NRL.com predicts: This could go either way, the Sharks will not want to drop another game and the Tigers' decent record against them particularly at Leichhardt Oval should come into calculations. Cleary has the Tigers switched on and you give them every chance (said the same last week) but it is hard to see the Sharks dropping back-to-back games, especially as they have shown no issues travelling this season and grinding out sides who like to throw the ball around. Sharks by 8. 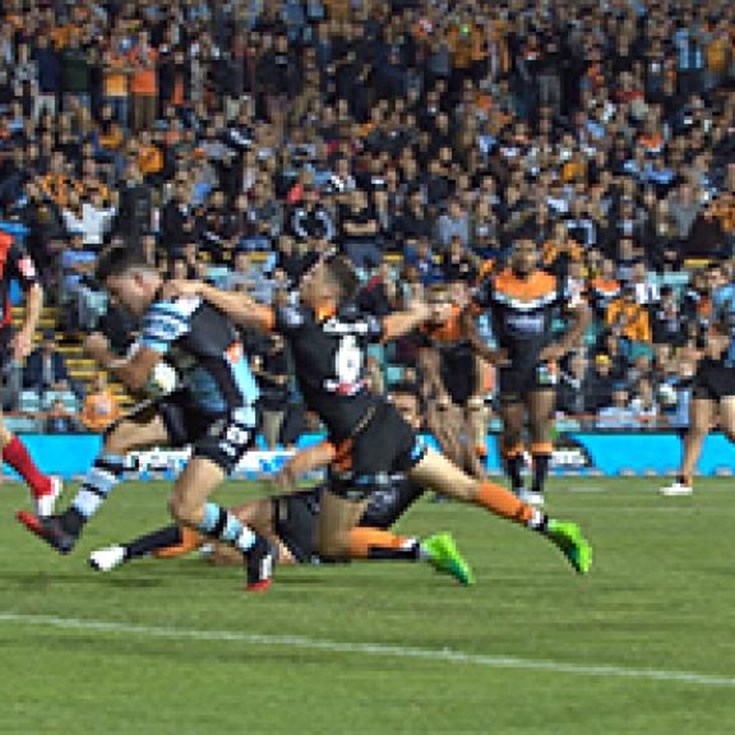