If you are a Titans player or fan there are two ways of looking at Melbourne's decision to bring their Round 10 home game to Brisbane as the opener to the Suncorp Stadium double-header.

On the positive side, the Titans have won only two of nine matches they have played in Melbourne since 2007 with a combined for-and-against heavily in favour of the men in purple (283-136) and they should feel much more comfortable having to travel to just an hour up the M1.

On the flipside, Suncorp Stadium has become very much a home away from home for the men from Melbourne, having lost just three games from 15 that they have played at 'The Cauldron' which includes 11 wins from their past 12 at the venue.

Add in the fact that Storm skipper Cameron Smith has a combined winning record at Suncorp Stadium of 32 victories from 43 appearances across the NRL, State of Origin and Test football and you see perhaps why the Storm view the exercise as less of a risk and more as a way to service their large number of Queensland-based supporters.

Of course, the build-up to this particular contest has been over-shadowed by the drugs scandal that has brought great embarrassment to not only Jesse Bromwich and Kevin Proctor but respective clubs, the New Zealand Rugby League and the game itself.

Both Kiwi internationals will be conspicuous by their absence on Saturday night and given they are already without Christian Welch (ACL) and Nelson Asofa-Solomona (hand) it puts an even greater strain on Melbourne's forward stocks.

After turning out for Sunshine Coast two weeks ago in the Intrust Super Cup, Tohu Harris is in line to make what would be a welcome return for his first NRL game of 2017 while Felise Kaufusi has been cleared to play after accepting an early guilty plea at the judiciary this week.

Besides the absence of Proctor the Titans are looking as strong on paper as they have all season with coach Neil Henry again opting to start Jarryd Hayne in the centres where he will mark up on Kangaroos centre Will Chambers and retaining Tyrone Roberts at fullback.

‌Why the Storm can win it: Their record at Suncorp is outstanding, they currently have a four-point buffer at the top of the Telstra Premiership and the timeless trio of Billy Slater, Cooper Cronk and Cameron Smith are at the peak of their powers. The key to Melbourne's success this and most every other season since Craig Bellamy has been in charge is that they make a quick kill early and then strangle the life out of the opposition. The Storm's most prolific period for scoring tries this season is in the first 10 minutes of a game and their next best is in the 10 minutes that follows it. The Titans have points in them but Melbourne defend a lead better than any other team in the NRL.

Why the Titans can win it: Yes, the Storm have the second-most miserly defence in the competition but the Titans have point-scoring potency right across the park and have shown a willingness to chance their hand in 2017. Only the Dragons and Sea Eagles have scored more points than Gold Coast through nine rounds who come in after an almost point-a-minute blitzkrieg in the second half against Newcastle last start. To upset the Storm you need to throw plenty at them and the likes of Ash Taylor, Kane Elgey, Jarryd Hayne and Tyrone Roberts are unlikely to die wondering.

‌
The history: Played 16; Storm 11; Titans 5. A 50-6 thumping was a rude shock to the Titans in their inaugural season in 2007 but they bounced back well to win three of the next four meetings between the two sides. It's been one-way traffic of late however with the Storm victorious in nine of the past 11 clashes including the last four on the trot. Their two meetings in 2016 were decidedly lop-sided with Melbourne recording 34-16 and 38-0 wins.

What are the odds: Storm $1.34, Titans $3.27. Melbourne are the best-backed team of the round with 90 per cent of money in this game on the Storm to beat the Titans. There's more money bet on Melbourne 13-plus than all of the other winning margin options combined. Latest odds at Sportsbet.com.au.

NRL.com predicts: You know how sometimes everything points to a certain result yet there is a nagging thought in the back of your mind that it will go the other way regardless? The Storm have dominated the Titans in recent years, are the form team of the competition and love playing at Suncorp Stadium, a venue where the Titans have only won three times in 18 visits. But the loss of Jesse Bromwich is huge for Melbourne and for the first time this season the Titans come in with their tails up. Titans by four points.

Right time to play Storm: James
Focus back on NRL for league leaders
Bromwich, Proctor out of World Cup
Slater all about what's best for Maroons
Titans star's dream beyond football
Tyrone Roberts a self-made footballer 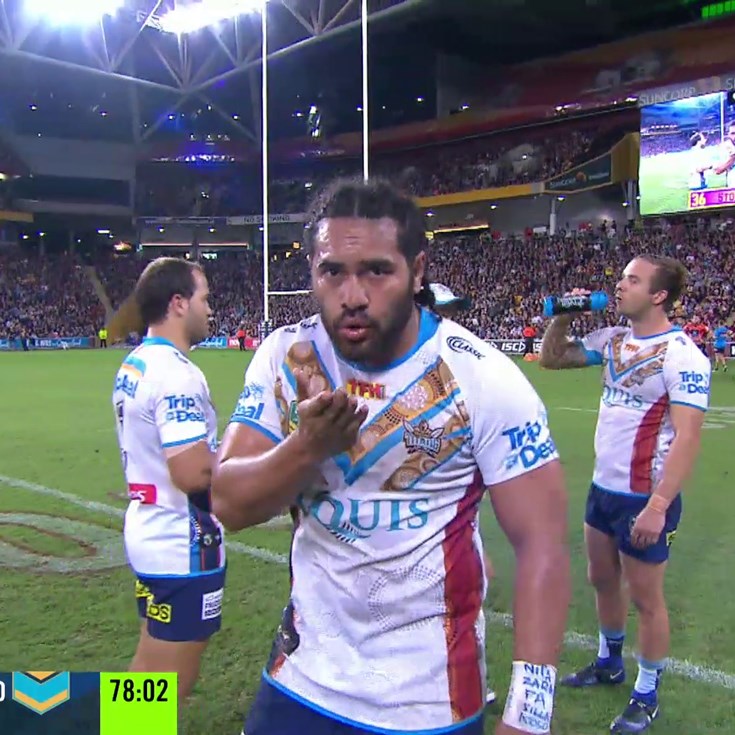