Given the fanfare surrounding his new four-year deal to remain at the Broncos, Anthony Milford scoring his side's first try in the early moments of the second half was perhaps expected but the role played by Kodi Nikorima in the lead-up could be just as crucial to the club's future.

With Ben Hunt getting closer and closer to returning from a hamstring injury the microscope on Nikorima's performances becomes all the more intense and his sleight of hand to put Korbin Sims through a hole 30 metres out was the type of play expected of an NRL No.7.

His quick thinking when Jorge Taufua spilled the ball from a kick return in the 65th minute to steal the ball from between the Manly winger's legs and race 30 metres to the try-line gave his side the lead for the first time in the game.

"He's a Kiwi Test player and his combination with [Anthony] Milford is only going to get better," Broncos captain Darius Boyd told Fox Sports.

Brisbane's greatest period of success as a club came with a cheeky little bloke wearing the No.7, and Nikorima has shown enough in recent weeks to suggest he could be worth persevering with.

For 60 minutes Tom Trbojevic did everything to not only earn Manly an important win but also lock up an Origin debut in a fortnight's time but an unfortunate incident 15 minutes from full-time has put his immediate playing future in doubt.

The driving force behind Manly's 14-0 first half with a try and a somewhat questionable try assist for Jorge Taufua's try, Trbojevic leapt to take an Andrew McCullough bomb that had bounced high into the air and fell very awkwardly on his left leg, immediately taken from the field with concerns over both knee and ankle injuries.

While Tom's Origin prospects now rest in the hands of the Manly medical staff, Jake Trbojevic backed up from his week with the Kangaroos to put in another industrious performance that screams Origin player.

Jake made 32 tackles and ran for 135 metres and showed great skill and wonderful understanding to put his younger brother through for a line break in the first half and may have pencilled himself in for a Suncorp Stadium return, albeit in a different-coloured jersey.

Lauded for a number of displays filling in at halfback last season, Apisai Koroisau's emergence as one of the NRL's most dangerous dummy-halves is giving Manly momentum that they are converting into premiership points.

Stuck behind Issac Luke at South Sydney, Koroisau moved to Penrith in 2015 before joining the Sea Eagles last season where he was regularly used as Daly Cherry-Evans's deputy in the No.7 jersey.

With the Manly spine staying intact through the first 10 rounds Koroisau has flourished and terrorised an uncharacteristically sloppy Bronco ruck defence with incisive darts around retreating markers.

He showed tremendous strength to push through Brisbane's goal-line defence in the seventh minute and managed to out-tackle the NRL's top tackler and his opposite number on Saturday night, Andrew McCullough.

For the first nine minutes of the game the Broncos were conceding more than a point a minute but despite Manly still making inroads around the rucks they kept their copybook intact to come back from a 14-0 deficit to win 24-14.

With Martin Taupau rolling through the middle and Apisai Koroisau darting out on the back of it the Broncos were in danger of being exposed but some desperation rectified the imbalance and they were able to post a flood of points as a result.

Titans captain Ryan James expressed his surprise at just how many fans came in for the 'early game' on Saturday night and the total attendance of 44,127 is proof again of how successful event experiences can be in the NRL.

Suncorp Stadium officials praised the input of all four clubs in their promotion of what has become a highlight on the calendar to draw such a strong crowd, second only to the traditional marquee match-up between the Broncos and Cowboys for the biggest NRL regular season crowd of the year to date.

It's locked in again for next year in Queensland and deserves serious exploration in Sydney also where a double-header hasn't been played since the opening of ANZ Stadium way back in 1999.

Broncos fight back to beat Manly 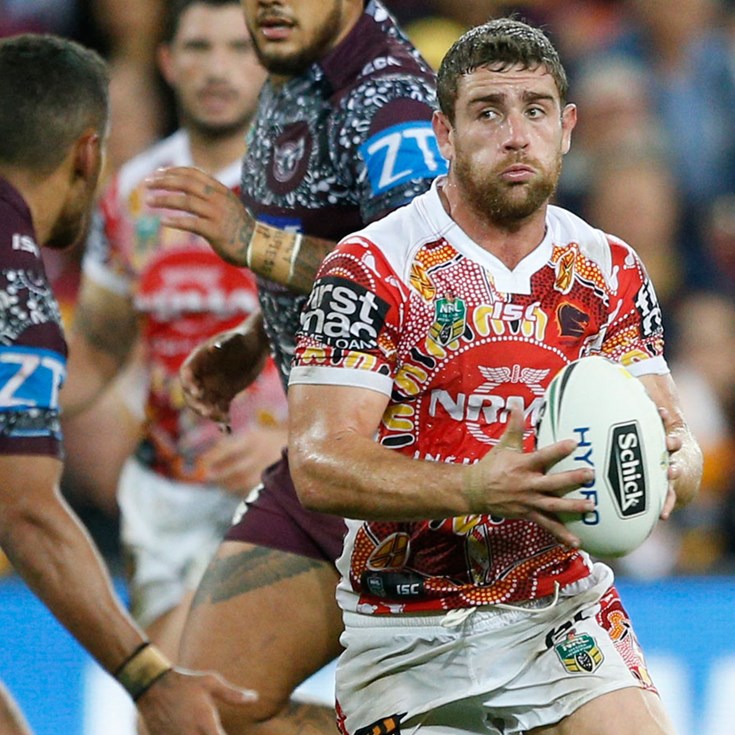 Trbojevic out for six to eight weeks

Broncos next on Manly's high-flying hit-list