The Melbourne Storm showed what they can do but were still chased down by a superb Gold Coast Titans side that defied three key injuries for arguably their most memorable win.

‌Titans turn Suncorp record around in a thriller

Before Saturday night, Gold Coast had not won at Suncorp Stadium since 2012. That was only the third time they had ever won at the venue, but it all changed when the Titans came from behind to win 38-36 against the Storm in a thriller. Saturday's win was the first time Gold Coast had won at Lang Park as the away team, playing as the designated 'home side' in their three other wins, including their first game against the Brisbane Broncos in 2007. It prompted commentator Mark Gasnier to make the claim that Saturday's win was "the best in the club's history". The Titans have now won three in a row and are on the verge of the top eight.

Big three back at their best

The Melbourne Storm's 'big three' are well and truly back and it is beautiful to watch. In a scary vision for New South Wales supporters, Cameron Smith, Billy Slater and Cooper Cronk all combined to score a trademark try. It prompted Queensland Maroons coach Kevin Walters to give the media one of the biggest smiles ever seen on a person's face. The try came in the 23rd minute, with Smith darting from dummy half to find Slater who split the Titans' line. Slater then ran into open space, passing to Cronk who scored next to the posts.

History almost repeated in the 40th minute, but Cronk was ruled offside from a Slater kick. With Slater now back to his best, it can be safely assumed he will start at fullback for the Maroons come Game One of the State of Origin Series on May 29th.

Wallace puts his hand up for Queensland selection

With the Maroons running low on front-rowers, they could do worse than pick Titan Jarrod Wallace for a Queensland debut. Wallace ran for 195m on Saturday night, with his no-fuss, hardworking style of running putting a dent in Melbourne's defensive line all night. The former Bronco is having a season to be remembered and is screaming to be picked for higher honours. Wallace is an old-fashioned front-row forward and his tireless work ethic is made for Origin.

Not only did Wallace make the most metres out of either side on Saturday, he also made the most post-contact metres with 79 to his name. Leaving the Broncos at the end of 2016 may be the best thing Wallace has ever done for his career after struggling for game time off the bench at Red Hill.

State of Origin winners and losers

Slater and Wallace were not the only players in Saturday's match to have performances that would impact their chances of playing Origin. New South Wales hopeful Jarryd Hayne was quiet at left centre and a poor defensive read against potential Queensland opponent Will Chambers let the Storm back into the game in the 65th minute.

Nathan Peats was excellent at dummy half, putting together three try assists and two line-break assists. It's a performance the Blues hopeful needed after a strong showing from rival Robbie Farah on Friday night. Felise Kaufusi was poor for Melbourne, making two crucial errors. Queensland's 18th man in 2016, Kaufusi will need a big performance in Round 11 if he is going to force his way into the Maroons' 17.

Ashley Taylor once again proved his kicking game is the strongest aspect of his game, putting the ball on a dime every time it touched his boot. Gold Coast dominated the field position during the first 20 minutes of the match and that was down to Taylor's skills with the boot. It prompted commentator Braith Anasta to give the Titans half a huge compliment that few could dispute: "His attacking kicks are the best in the competition and he tests the opposition every time he puts one in."

What's scary is that Taylor is just 22 years old – if he can keep improving at the rate he is, he will have a very bright future. Taylor finished with two try assists courtesy of his kicking game, with the young gun helping pull off a huge upset. 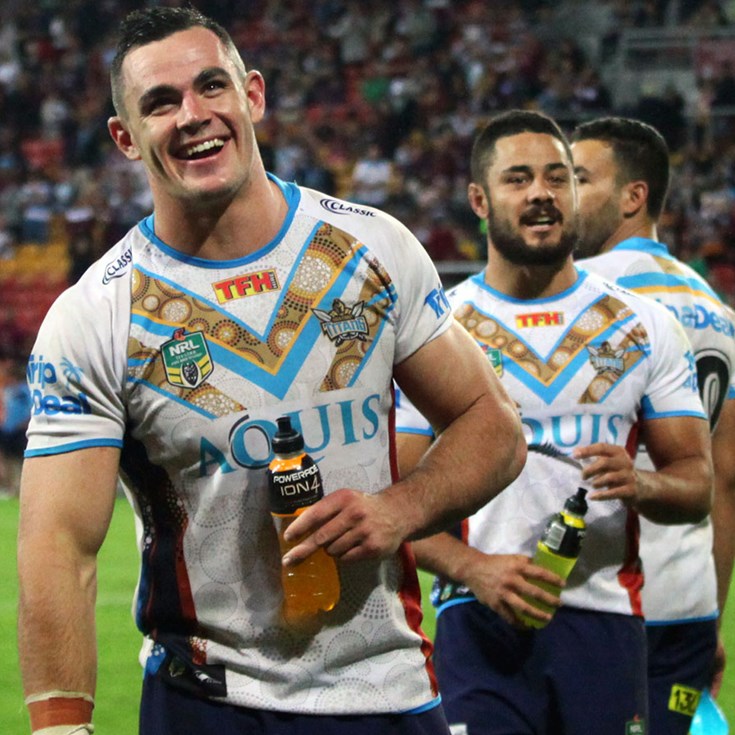