A stirring Newcastle Knights outfit have romped to a stunning 34-20 upset win over the Canberra Raiders at McDonald Jones Stadium on Sunday afternoon.

Despite a weight of possession against them, the Knights held tough in defence holding the Raiders out on their line in the opening half before surging to victory in the second stanza scoring in front of 10,997 fans.

After struggling in second halves in all but two games this season, the Knights struck with three tries in 10 minutes to blow the Raiders off the park and shock a stunned Ricky Stuart sitting on the bench.

Huddersfield recruit Joe Wardle ran a superb line off a deft pass from Jaelen Feeney to get the Knights in front early, before skipper Sione Mata'utia pounced on a Joey Leilua error in-goal to take home side's lead out to eight.

The match was sealed with 10 minutes remaining when Peter Mata'utia carried three defenders over the line, before five-eighth Brock Lamb pounced on a Ken Sio grubber kick in the 79th minute to put icing on the cake.

Canberra's terrible day out was confirmed when Joseph Paulo threw a ball into the grandstands after a four-on-two overlap and a 69 per cent completion rate for the game.

Both sides were guilty of errors in the opening 40 minutes while the fifth tackle options particularly from the Raiders outfit were questionable.

Newcastle's tactics to kick the ball out and away from the dangerous back three during the game starved the quality of kick-return from Jack Wighton and Jordan Rapana.

Canberra were keen to throw the ball around early but coughed up the ball on halfway through Paulo in the fourth minute.

Newcastle took advantage of the error with Danny Levi and Peter Mata'utia keeping the ball alive for Nathan Ross to crash over in the corner after the Knights came out firing through the middle of the ruck early.

Ricky Stuart's men were quick to respond through young winger Nick Cotric after the Raiders went down the left edge with ease to level the game.

The show of respect from the Canberra side early gave the Knights a touch of momentum with Mata'utia breaking past Elliott Whitehead and Leilua to outsprint Wighton to the line.

Mata'utia was on the end of a monster shot from Shannon Boyd after points that earnt his side a penalty as the Raiders lifted their intensity in defence.

Canberra charged at the Knights' line for five consecutive sets but Nathan Brown's side stood tall to repel them.

Newcastle blew a late chance soon after to extend their lead heading into the break when Lachlan Fitzgibbon dropped the ball reaching out to score.

Both sides were dealt with injury blows in the opening half with Canberra losing Luke Bateman after the lock-forward failed a HIA assessment in only the second minute of the game.

Knights prop Jacob Saifiti was then stretchered from the field 11 minutes out from half-time with a neck injury and did not return.

The 21-year-old was taken to hospital as a precaution.

Brother Daniel was outstanding in the win racking up 179 metres from 20 carries in a 60-minute effort.

Whatever Stuart said to the Raiders at half-time didn't seem to work have much effect on the switched-off Canberra line-up with Blake Austin kicking the ball out on the full from the restart.

The Raiders repelled the Knights attack well though and took back the lead with English pair Josh Hodgson and Whitehead linking together for the back-rower to carry Dane Gagai over the line.

Canberra set up an interesting finish with five minutes left to play when Cotric finished off a fair team effort for his second of the day, however the afternoon belonged to Newcastle who secured their second win of the season. 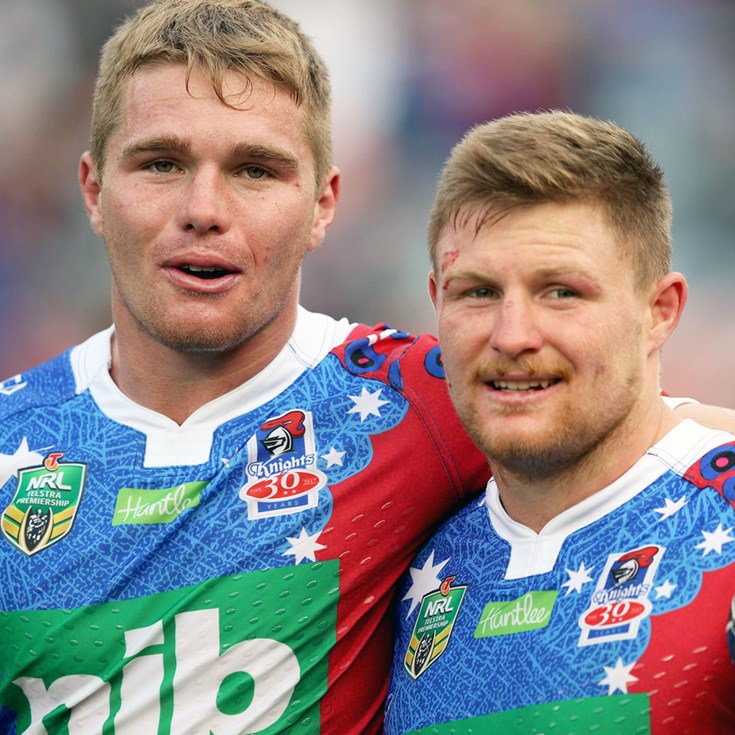