It was the sideline conversion from his non-preferred side by the game's most prolific goal-kicker that appeared to have sealed Melbourne's victory but Titans back-rower Chris McQueen has revealed how it actually changed the course of the match.

Cameron Smith's sixth successful goal kick from as many attempts gave the Storm an eight-point buffer nine minutes from full-time from which they would never normally lose, but knowing they needed two tries to win it sparked the Titans into one final assault.

In an extraordinary opening to the Suncorp Stadium double-header on Saturday night, the Titans had fought from 18-6 down to lead 28-18 midway through the second half but then gave up a further 18 points in a crazy six-minute period to lose their grip on the contest.

As Smith lined up his conversion attempt of the Cheyse Blair try in the 70th minute, Gold Coast players were hatching a plan that was dependent on whether it went between the posts or not, a plan that would ultimately lead them to a 38-36 win, their third on the trot.

"Before he took the kick and they were up by six we did have a discussion about the short or long kick-off," McQueen told NRL.com.

"We thought that if he gets it we need something special so we'll go short; if he misses it we'll kick long and just stick to our structure.

"He obviously got it so we went short and we got it back and there were a few lucky things that went our way.

"Games like that, you put yourself into a position to win it but you also need a lot of luck."

‌Three minutes after Smith's conversion the Titans scored their sixth try of the night courtesy of Tyrone Roberts, and when Storm winger Suliasi Vunivalu knocked on 15 metres out from his own line the Titans had three minutes to plot the match-winner.

With less than two minutes on the clock five-eighth Kane Elgey went to his left before doubling back to the right, putting in a cross-field kick that landed perfectly in the path of Anthony Don who was able to tap the ball back into the arms of Konrad Hurrell who barged over for his second try of the night.

Having scored a try himself from a Don tap-back earlier in the night in what was his 150th game in the NRL, McQueen said it was a game that he wouldn't soon forget and one which could prove pivotal in the Titans' season.

"They're the ones you need," McQueen said.

"There are probably five or six games like that a year where it's not pretty, it's messy and you've just got to find a way to win and tonight we did that.

"We've had a few of those games where we've been winning and we've lost in the dying minutes so to get one back it evens it out a little bit.

"Especially against a team like Melbourne, that is one of those games where that can set up a season for you.

"We will look back on that game and see it as a good building block for us.

"Obviously a great way to celebrate 150. Milestones don't mean anything if you don't win the game. We lost my 100th game when I was at the Rabbitohs so to get the job done tonight is a great feeling." 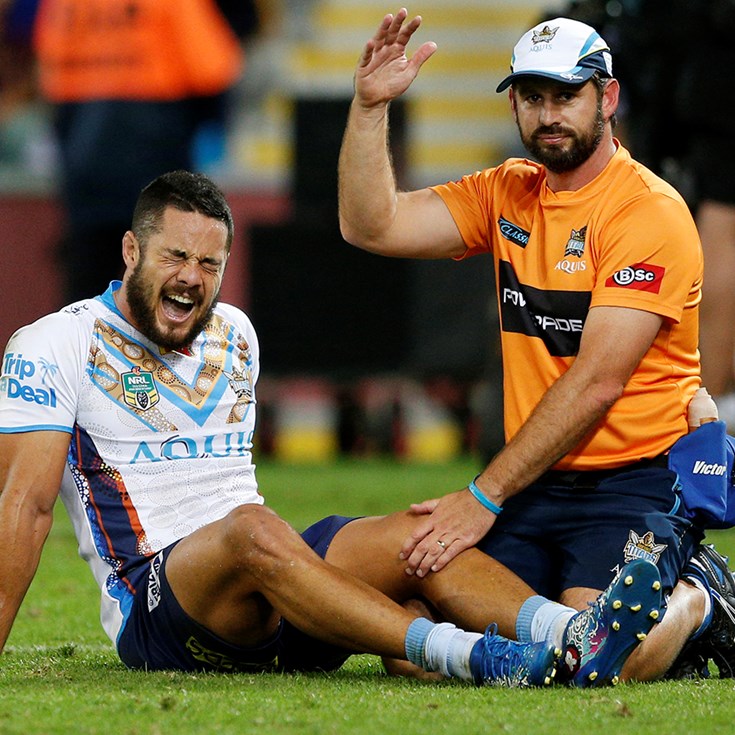