If these two clubs have one thing in common, it’s that both want to forget everything about Round 10 as quick as possible.

The good news for one club is that a win this weekend will ease those memories… for the other club their problems are about to seem even worse.

For Brad Arthur's Eels, the best news is they don't have to play at Allianz Stadium this week, a venue where they have now lost their past six straight, the past four of those all to the Roosters by a combined 182-32. Phew.

It's not all good news though, with star half Corey Norman sidelined for a month or so with a knee strain.

That loss is partially offset by the recruitment of playmaker Mitch Moses from the Wests Tigers ahead of schedule. We say partially because Moses will have only had a couple of field sessions at his new club, and his last-start performance was nothing short of diabolical. Admittedly the protracted contract dramas may have taken their toll on his mindset so it will be interesting to see if Brad Arthur can get the best out of him and if so, how long that will take.

The return of Bevan French from injury allows Gutherson to return to the halves where he is set to partner Moses (who has been named in the reserves initially though Will Smith is set to make way).

The Raiders have been one of the real disappointments of 2017. They were arguably the most entertaining team of last season with plenty of attacking flair but it just hasn't clicked this year.

The Green Machine's vaunted right edge has gone from dangerous to borderline non-existent (both in attack and defence) over the past three games while their once-dominant pack was out-enthused by a very inexperienced Knights pack last week.

Coach Ricky Stuart has stuck solid though; the return of Josh Papalii (disciplinary suspension) pushes Luke Bateman to the bench and Dunamis Lui to the reserves in the only team change.

‌Why Eels can win: Parramatta are a bit of an unknown quantity this week. Moses's arrival is timely given Norman's injury and while he missed a whopping nine tackles both a) last week and b) last time he played Canberra, he'll be hoping for better protection in the defensive line this week from Tepai Moeroa and Brad Takairangi (assuming he plays) than he got from Malakai Watene-Zelezniak and Josh Aloiai last week. His combination with impressive Mr Fix-it Clint Gutherson in the halves and returning whiz-kid Bevan French at fullback will be the absolute key to the Eels making and taking opportunities here.

Why Raiders can win: We said last week that Canberra are surely too good to put in another effort like their ones against Manly and Canterbury when they travelled to Newcastle. We may have missed the mark and after another disaster against Newcastle there are real questions around how and when (and if?) the Green Machine can rediscover their mojo. They won't get a much better chance than against a team coming off a 50-point hiding with a brand new halves combination but they need to lift their own game regardless of the opposition. We reckon that starts with the best players and English Test hooker Josh Hodgson fits the bill. Hodgson tried admirably in a beaten team last week with 54 tackles and a try assist and is the best hooker in the world not named Cameron Smith. Plenty falls to the halves, Blake Austin and Aidan Sezer, to create better chances in general play but Hodgson has the class and experience to lead them out of their current rut.

‌The history: Eels v Raiders: Played 54; Eels 26; Raiders 28. It's a very dominant recent record for the Green Machine with eight wins in the past 10 meetings. The Raiders' recent record at ANZ isn't great (two wins from their past seven trips) but they've actually never faced the Eels at this venue.

What are the odds: Another tight betting game according to Sportsbet punters with Canberra just shading Parramatta as far as support is concerned. Both sides have been backed to win 1-12 so it shapes as a tight game according to the betting market. Latest odds at sportsbet.com.au

NRL.com predicts: It's pretty tough to tip either side based on what they showed in Round 10. Eels losing their chief playmaker won't help (though the return of French and recruitment of Moses dulls the impact somewhat). This is a coin toss but we'll take Parramatta by four. 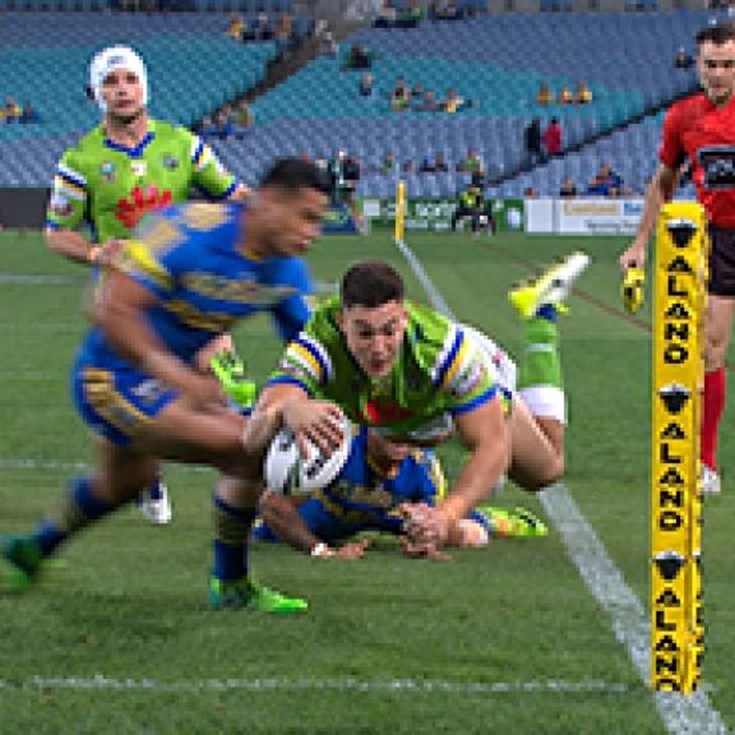 Stuart asked Raiders to 'do it for Croker'