The Brisbane Broncos completely outclassed the Wests Tigers at Suncorp Stadium on Friday night, running away 36-0 winners in a dominant team performance.

The win was soured by an injury to star hooker Andrew McCullough who was stretchered from the field after suffering a nasty head knock when trying to make a tackle on Tigers forward Kyle Lovett in the second half.

But Wests had their own injury concerns, losing halfback Luke Brooks before kick-off, with the Tigers' No.7 succumbing to a niggling hamstring injury.

It was terrible news for Wests who had already lost five-eighth Mitchell Moses during the week to a mid-season transfer to the Parramatta Eels.

The game was put to bed by half-time, with the Broncos leading 24-0 at the break after a flawless first 40 minutes.

The Tigers needed to make a fast start to the second half but they failed to do so, with Ivan Cleary's men doing the opposite instead.

It was to the benefit of Broncos centre James Roberts who picked up a Jack Littlejohn kick from inside his own in-goal and scooted away. Roberts burnt the Tigers' defence, running 60 metres before passing to Kodi Nikorima who went on to score under the posts. Kahu put his kick for goal over the black dot to give Brisbane a 30-0 lead at the 48-minute mark.

Wests were their own worst enemy, butchering a certain try in the 52nd minute when Lovett threw a forward pass from dummy half.

The Tigers' night then went from bad to terrible in the 55th minute, with Kodi Nikorima putting Joe Ofahengaue through a huge whole in Wests' defence. Ofahengaue then passed to Milford who ran away to score.

In distressing scenes, McCullough was knocked out trying to make a tackle in the 58th minute and stretchered from the field.

But it seemed to spur Brisbane on, with the team rallying for their injured teammate.

The Broncos almost added another try to their tally in the 63rd minute, but Corey Oates uncharacteristically knocked on with the try line in sight.

In a late blow for the Tigers, second-row forward Josh Aloiai dislocated his knee cap in the 75th minute and was stretchered off.

It was sour end to a horrible night for Wests who failed to score a single point in the 36-point drubbing.

The Tigers were only in the match for first 10 minutes, with both sides taking time to acclimatise to the wet conditions at Suncorp Stadium.

It was the Broncos who adjusted the better of the two teams, opening the scoring in the 14th minute.

A sublime Nikorima cut-out ball found Oates, with the hulking winger finding free space before passing inside to Tautau Moga who crossed to the left of the posts. Kahu added the extras to give the Broncos a 6-0 lead and all the early momentum.

Alex Glenn scored his first try of the year in the 23rd minute, slicing through the Tigers' defence courtesy of a beautiful ball from Milford.

Wests had a try disallowed in the 30th minute, with an obstruction from Tim Grant denying James Tedesco what looked to be a certain four-pointer.

Tedesco's night soon turned into a horror show, sin binned for holding down Kahu after the New Zealand international intercepted a pass that was throw by Tedesco himself.

The Broncos made the Tigers pay almost immediately, with Milford finding Korbin Sims with a sensational inside ball that gave the prop his fourth try of the season. Kahu made it three from three with the boot to give Brisbane an 18-0 lead five minutes from half-time.

Two minutes later, Milford brought up his third try assist of the night. Kahu was the beneficiary, crossing next to the posts off a scrum set play. Kahu took his personal points tally to 12 with the conversion and the Broncos suddenly hit a 24-0 lead.

That's how it stayed heading into the break, with Brisbane well and truly on top in a one-sided affair.

They went on with it in the second 40 to record their sixth consecutive victory and go top of the NRL Premiership ladder. 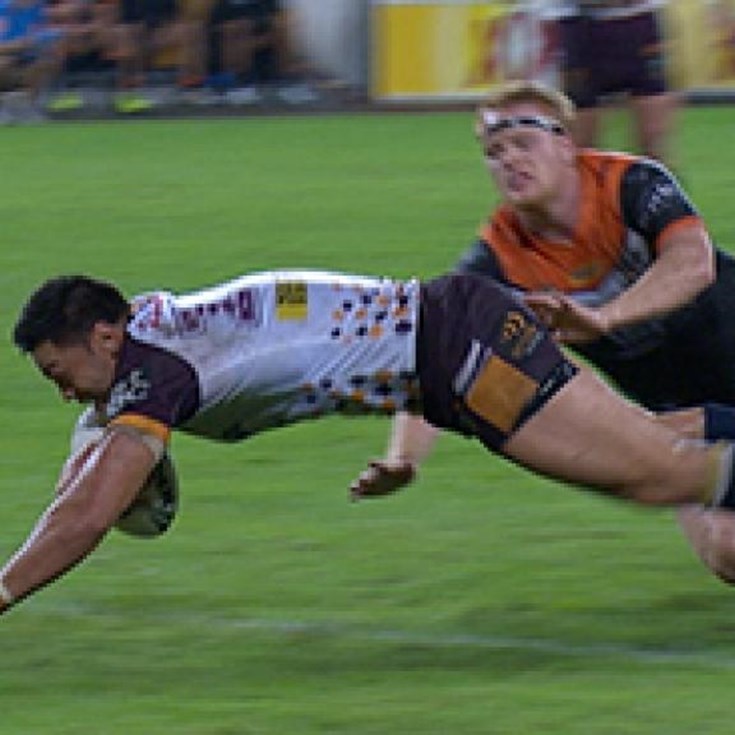