State of Origin hopefuls stand up in a game of two halves as the Newcastle Knights let another lead slip in the 30-20 loss to the Penrith Panthers on Sunday afternoon.

‌‌Panthers' season back on track

Back-to-back wins for the first time this season heading into the bye places the Panthers in a more promising position to a fortnight ago when they were languishing in 15th spot on the NRL Telstra Premiership ladder.

Similar to the Cronulla Sharks who are finding ways to win, Penrith's second-half performances will hold them in good stead and should they learn to start better after the bye period, the Panthers of late-2016 could make a welcome return.

While first halves continue to be an issue for Anthony Griffin's men, a win over the Bulldogs in Round 13 could remarkably find the Panthers back in top eight contention and allow them to build into the back half of the season.

"We shouldn't be leaking those points but I like that we're not lying down and at half-time we just spoke about winning the game and how we were going to win it," Griffin said post-game.

"We need to find better ways to win but the team at the moment is learning how to."

Rugby league is a game that requires luck and Knights coach Nathan Brown believes some of the calls that were ruled against his side played a part in the result.

Returning lock-forward Mitch Barnett was ruled to have stripped the ball on Panthers winger Dallin Watene-Zelezniak in the first half, before Knights fullback Dane Gagai lost possession when Penrith looked to have forced the ball loose in a two-man tackle.

"The call on the strip from Mitch Barnett was poor," Brown said post-game.

"Then after half-time we make a line break and [Feeney] pass was not forward.

"We never had the ball for 20 minutes then.

"We're not making excuses but that was a bad call that had an impact on the game."

Panthers rally to down Knights

Bumper games from Panthers trio Matt Moylan, James Tamou and Trent Merrin could give NSW Blues coach Laurie Daley a last-minute headache with the team for State of Origin I named on Monday.

Merrin's form in the last fortnight has stood out particularly with the Australian international playing a crucial role in the Panthers' win over the Knights with a try assist and over 210 metres.

Teammates Moylan and Tamou have both found form since Representative Round and both crossed the line over the Novocastrians while it was the first double of Moylan's NRL career.

Tamou finished with 153 metres in a 48-minute effort.

Injury concerns for both camps

Both sides will relish the benefit of the bye in Round 13 with injuries coming from both sheds. Newcastle lost prop-forward Josh Starling to a wrist injury in the warm-up, while Jack Stockwell picked up a shoulder complaint and didn't return to the field.

Penrith's major concern comes in the form of Peter Wallace who left the field in the first half with a groin injury. The 31-year-old is in the frame for the Blues' hooker position but is now in doubt. Five-eighth Bryce Cartwright was also injured in the contest.

"He just couldn't stretch out so we'll have to get a scan," Griffin said post-game.

"He was on his back and someone fell on him and he couldn't stretch out after that.

"[Bryce] has hyperextended his knee, again he got fell on. We strapped him up and thought he might be right but he just had no power."

"Hopefully for them it's not too serious."

For the fifth time this season the Knights had a half-time lead but failed to go on with the advantage in the second half.

Newcastle's completion rate in the opening 40 minutes was reflected on the scoreboard with eight extra sets on the attack and a 14-point lead, however the Novocastrians finished the game with 12 errors and 106 extra tackles.

"We had a great first half, to come 14-0 up was pleasing to keep turning them away and we attacked quite well," Brown said.

"Our ability to regain momentum in this game is not good enough at the moment." 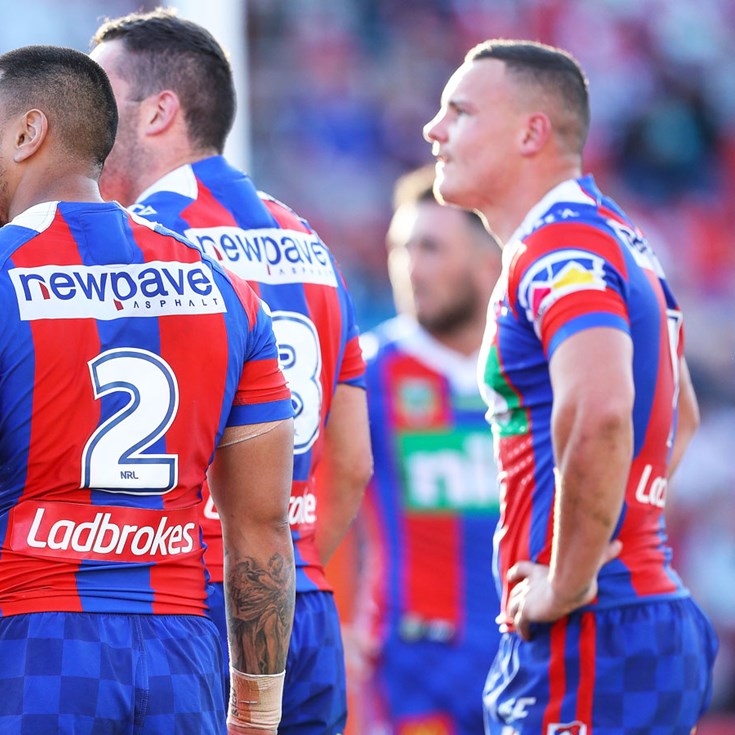