An inspirational performance from former NSW skipper Paul Gallen has helped guide the Cronulla Sharks to a thrilling 9-8 victory over the Canterbury Bulldogs at Southern Cross Group Stadium.

Gallen pulled off two stunning plays with less than a quarter of the game left to ensure the Sharks would pick up the two points in front of a record sell-out crowd of 20,497.

The first effort from Gallen came in the 65th minute when the Sharks captain managed to get out of his own in-goal with the Bulldogs seemingly having all the momentum.

From there, a strong run from Valentine Holmes followed, before Gerard Beale broke the tackle attempt from Josh Morris to race 70 metres and go over next to the posts.

Gallen then busted through up the middle in the final three minutes to put the Bulldogs on the back foot and allow halfback Chad Townsend to slot a field-goal from 25 metres out – after his earlier attempt sailed wide.

‌
The Bulldogs were dealt a blow early in the 20th minute when skipper James Graham left the field with nerve damage to his right arm and did not return.

Shane Flanagan's side had most of the opportunities with a 90 percent completion rate and a 6-1 penalty count in their favour in the opening half, however the Bulldogs showed strong resilience in defence to turn the reigning premiers away.

With no James Maloney in the line-up, the Sharks opted for a penalty goal through Holmes for an early two-point lead after a strong weight of possession to start the contest was defended well by Hasler's outfit.

Both sides went set-for-set with no real attacking opportunities until Moses Mbye found the in-form Brenko Lee who stepped inside opposite number Ricky Leutele to go over for the visitors in the 26th minute.

The Sharks had a chance before the half-time break when Jayden Brailey kicked through for Luke Lewis, however the veteran back-rower couldn't grasp the ball in-goal.

Lewis then turned the culprit after the break when he was ruled to have stripped the ball on fullback Will Hopoate in a two-man tackle – the Bulldogs opting to take the lead out to six through a Holland penalty goal.

Cronulla looked to have responded quickly through Sosaia Feki in the left-hand corner, however the scrambling defence from Lee denied the former Tongan international.

Feki then turned the ball over to hand the Bulldogs possession with five-eighth Matt Frawley forcing a repeat set, however the momentum was again short-lived when Sam Kasiano spilt the second ball of his night.

With the game on the line, the Bulldogs struggled to find enough field position or direction to stretch their lead out to seven, with the experience of Gallen and class of Holmes at the death proving the difference. 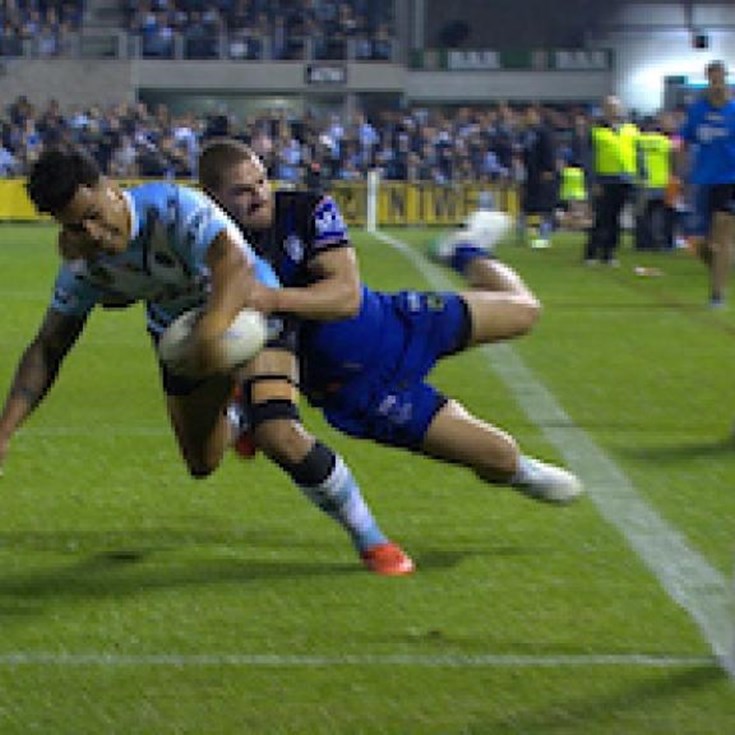 No regrets on Origin for Gallen