The 2017 Holden State of Origin series kicks off on Wednesday night with an injury-hit Queensland side hosting a confident NSW Blues outfit at Suncorp Stadium.

Today we discuss the biggest surprises in each squad, the absence of Billy Slater, the selection of Mitchell Pearce and our predictions for the series opener.

Dominic Brock (NRL.com Production Editor): Johnathan Thurston's fitness was the big talking point going into the Queensland team announcement, but the choice to leave Billy Slater out of the side was the main point of contention to come out of the announcement. What are your thoughts on the Maroons' decision to stick loyal with their 2016 side rather than brining Slater back in and shifting Darius Boyd to the wing? And will it hurt or help their chances?

Chris Kennedy (National Correspondent): Personally I still struggle to see how leaving Slater out is for the best. He's playing terrific footy. Clearly one of the main issues was the strong form of Darius at fullback for Queensland and Australia over the past two years. But Darius is Origin's second-greatest ever try-scorer from the wing, he's done it a million times before and one last series of Billy at fullback and Darius on the wing would've made sense, in my opinion. It would have allowed Gagai to play in his preferred spot while leaving out the out-of-form O'Neill – or to leave out Oates, who isn't in career-best form either.

Andy Bryan (Deputy Editor): Any combination of possibilities with Billy Slater and Darius Boyd both in the Queensland side is infinitely better than the team named without Slater. NSW fans were very happy not seeing Slater's name in the team sheet, especially when Johnathan Thurston was ruled out as well. With no Inglis and no Matt Scott and the retirement of Corey Parker, Slater's experience in the backline, either at fullback or unconventionally on a wing would have been much better for the Maroons.

Adrian McMurray (Producer): I certainly understand the thinking, but I would've found a spot for Slater. I think some forget just how good Boyd has been of recent times, but surely they could've shifted between the wing and fullback? The Queensland team looks more dangerous with Slater AND Boyd.

AB: And this is not a knock on Darius Boyd at all, who has been the form fullback of the last two seasons, it's more thinking that Slater is a better choice than the other players, not that he should have replaced Boyd.

DB: For what it's worth I can see why they'd choose not to play Slater on the wing – he hasn't played there for ages and having size on the wing is somewhat of a prerequisite at Origin level these days.

CK: Yeah I don't think you could possibly play Slater on the wing. If he plays it's at fullback with Darius on the wing. As others have said, there's no reason they couldn't interchange a bit to try and get the best out of both.

There's also a point of view floating around that Slater's shoulder injury is hampering him in defence and he's supposedly still favouring the shoulder. I haven't really noticed this in Storm games this year. While Origin is no place for players who can't throw themselves fully into their defence, he looks like he'd still handle it okay.

AB: Might be the major difference between Queensland and NSW: the Blues have no dramas picking players like Jarryd Hayne on a wing or centre. The Maroons made a bold decision to leave out arguably the greatest fullback of all time. Time will tell, but it was a massive call. ‌‌

‌DB: The Maroons can generally select a team packed with champions, but with Thurston, Greg Inglis and Matt Scott missing, as well as Slater and the retired Corey Parker, are they still a "great" side or just "very good"?

AB: NSW should win this opening game. Origin is not played on paper and Suncorp Stadium is a tough place to win, but they have no excuses. Without those superstars and possibly future Immortals in the Queensland side, the Blues look the better team in the forwards and in the backs. Cam Smith and Cooper Cronk will need to work in overdrive to get the result – which they've proven they can do.

CK: I guess we won't really know until two days (or potentially six weeks) from now. With Cam, Cooper and Darius in, plus plenty of good forwards (let's not ignore the ripping form of Papalii, Gillett and McGuire of late) there's still a surplus of quality in that team.

AM: There's no denying this is the weakest Queensland side they've fielded in their era of dominance. As the others have said, Smith, Cronk and Boyd still make this more than just a "very good" outfit. But I still get the feeling that it's a definite drop from their usual outrageously strong squad.

CK: I guess there's a slight extra hint of vulnerability to previous seasons. But I get the feeling Game One will be very tight.

DB: The Blues side that's been picked is less controversial, and looks pretty solid across the board. It's very close to the one we came up with a couple of weeks ago. Once again there's a talking point around Mitchell Pearce's inclusion in the side – is this the year he proves the doubters wrong at Origin level?

AB: Pearce is the very public face of NSW's failings in recent years, but while he hasn't played his best in this arena the Blues' shortcomings are in no way all Pearce's fault. There are elements of his game he needs to improve at this level, but a certain Darren Lockyer had a very similar record at Origin at the same point of his career. I'm not saying Pearce can replicate what Lockyer did, but he won't get a better opportunity.

CK: I flip-flopped on the Pearce selection leading in and I think my eventual preferred Blues side had Maloney with Moylan in the halves. But after a week in the NSW camp I'm certain Laurie and Sterlo have made the right call. He's simply the form Blues half, no question. This is the best chance he's had. I think Peats at hooker rather than Farah will help him and even not having Gallen there commanding a lot of ball should benefit him.

Tedesco is a great role-player and support player and will be able to help finish chances without getting in the way of the halves. The forwards should at least match it in the middle if not edge the battle of the packs. Pearce is in a good space and career best form with a team that suits his strengths around him. He's worn far more than his share of criticism in the past while also, it must be said, failing to bring his best in Origin. If he can't produce his best this series then it's time to look elsewhere but as we stand I think he's the man for the job.

AB: Well said. There isn't a better halfback in NSW.

AM: I really hope so. I guess when you're the key man in a side that's lost series after series, much of the blame has fallen to Pearce. As CK pointed out, he's the best they could call on. This has to be make-or-break for the NSW No.7.

DB: I think the fact that Matt Moylan is seen as the only real alternative shows at least the Pearce is the best genuine No.7 in NSW right now – even if he's already played in a lot of losing Origin performances (against the best Queensland side ever assembled).

CK: Nathan Cleary hasn't quite kicked on in a struggling Penrith side this year but whether he's the long-term Blues half from next year or five years from now could well depend on how Pearce goes this series.

DB: Any other notable selections we should discuss?

CK: I touched on it earlier but I like the Peats selection. Love his mongrel. He's in good form and I'm tipping him to enjoy the big stage

DB: Yeah it's a good point. Robbie Farah has been a fixture of the Blues side in recent years and he's the only NSW forward to play every minute of last year's series. It's a pretty significant change.

CK: As I mentioned, the desire to give Pearce the run of the team was a factor but Robbie's reduced minutes and South Sydney's struggles probably made this an easier call for selectors.

AM: I've always been a big fan of Farah's work but I love the inclusion of Peats. It's no coincidence the Titans' fortunes started to turn when he returned from injury. By all accounts he's fitted in well to the NSW set-up and should work well as part of spine that could be there for the foreseeable future at least.

CK: The other thing that grabbed me is some of the more conservative options taken by Queensland – Guerra and Lillyman for example. No Coen Hess (who I personally think needs another year, to be fair). No Gav Cooper, no Jarrod Wallace...

DB: Going conservative has worked for Queensland in the recent past. In saying that, they've always had a group of superstars to base their team around so they haven't needed to take risks for some time.

AM: I believe the thinking was that they felt they needed Origin experience in the side when they'd already lost so much. So while I probably would've gone with a few more fresh faces, especially at Suncorp Stadium, I sort of get what they're up to. I thought they could've found a spot for Cooper and Wallace though.

DB: OK, taking all that into account – and the fact Queensland are playing at home – who will win Origin I and why?

CK: It's a razor-tight call. I'll go Blues by four. Much will come down to who has the early momentum. Given the extra power in the Blues' bench, if they own the first 20 minutes they'll be better equipped to kick on through the 20 minutes either side of half-time.

AB: If the game is tight, I feel Cam Smith and Cooper Cronk will just find a way to get the result, like they always do. For the Blues to win they need to dominate the middle, play through the Maroons and capitalise on possession and momentum. On paper I really like the NSW side and their bench rotation and think if they can get the edge in the early stages they could be too strong. But they need to be patient and stick at it. Queensland won't fall away. I'm going to tip NSW by 8. But they wouldn't want it to be close in the final 10 minutes.

AM: I'm more confident of a NSW victory than I've ever been in the past few years. Everything seems to have fallen the way of the Blues in the build-up, and they'll be putting everything in to Game One so as to set up a potential series victory at home in Game Two. It won't be easy, but the Blues side looks far superior. NSW by 6.

AB: So the Maroons are underdogs then? Perfect...

AM: How did this happen?!

DB: Yeah I'll go the other way and tip Queensland in a close one. They love the underdog status and with their backs to the wall in a crucial game their big guns will surely stand up, even if the Blues have them covered on paper. Thanks guys. 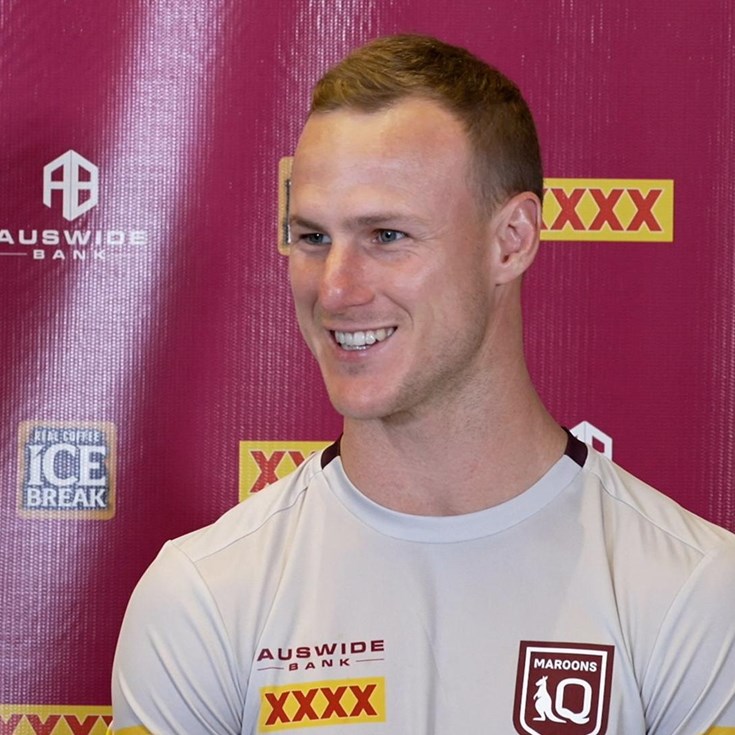